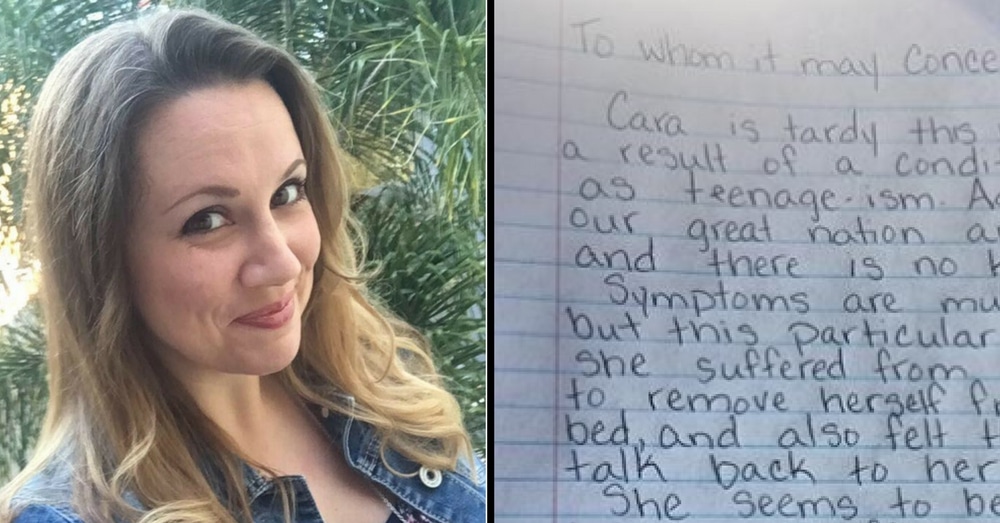 Parenting young kids can be challenging, but nothing can prepare you for being the parent of a teenager! Their changing hormones, mood swings, and desire for independence combine to make for some truly… shall we say, “interesting”… teen years.

Nicole Poppic got a taste of this firsthand when she tried to get her teenage daughter, Cara, up for school. She said Cara is a good kid – on the honor roll and an exceptional pianist – but even good kids have their moments.

Nicole was already frustrated with Cara for not getting out of bed and making her and her younger siblings late for school, but the frazzled mom reached her tipping point when she was in the middle of lecturing Cara only to realize her daughter had her earbuds in and was listening to music instead of her mom.

After dropping her younger children off, Nicole headed over to Cara’s school. Knowing she would need a note explaining her extreme tardiness, Cara asked her mom to write one.

Fed up, Nicole decided to write an “honest excuse letter,” which she later shared on Facebook.

To whom it may concern,

Cara is tardy this morning as a result of a condition known as teenage-ism. Adolescents across our great nation are afflicted and there is no known cure.

Symptoms are multitudinous, but this particular morning, she suffered from an inability to remove herself from her bed, and also felt the need to talk back to her birth-giver.

She seems to be recovering her senses after watching her cell phone fly out the car window. Please call if there is another flare-up.

Cara did not find the note as amusing as her mother did and refused to take it in, so Nicole took it for her, accompanying her daughter to the school to give the note to the attendance clerk.

Nicole’s goal wasn’t to humiliate her daughter, but to teach her to take responsibility for her own actions.

Since Nicole posted the note it has gone viral. Many parents have made comments such as, “You rock!” and, “I would sooooo do this!”

Nicole’s takeaway lesson for Cara? “This is what happens when you are tardy as a result of your own poor choices and you ask me for a note to excuse your tardiness.”

Were you impressed with the way Nicole handled this situation? So share this!