Mom Finds Daughter’s Letter To Santa. When She Sees What She Asked For Breaks Down Sobbing 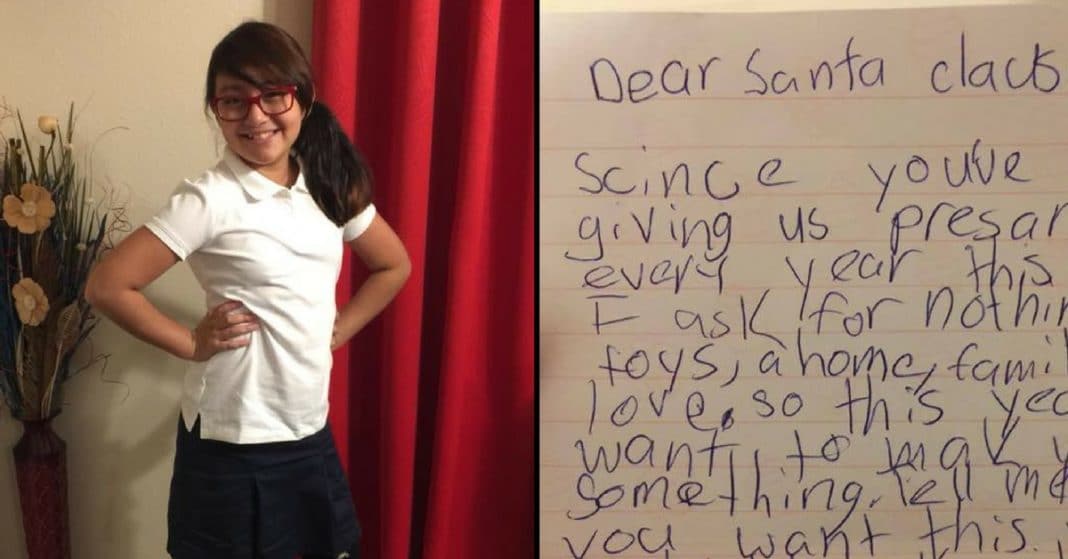 It’s always interesting to see what children write on their Christmas wish lists to Santa. In their child’s scroll, we get a glimpse into what’s going on in their minds. Usually, they wish for the latest tech gadgets or the hot new toy.

But one 8-year-old girl named Nadia didn’t ask for any of those things. She sent her poignant letter to Santa via an “Elf on the Shelf” named Twinkle.

“When I found it, my heart melted, and I cried,” said Nadia’s mother, Diana Vasquez Prado.

Diana shared her daughter’s letter on Facebook. Get ready to be awed and amazed by Nadia’s maturity, kindness, and selflessness.

“Dear Santa Claus,” her adorable letter begins, ” Since you’ve been giving us presents every year this year I ask for nothing. I have toys, a home, family, and love.”

Nadia knows what’s most important in life – family, a home, and love. How wonderful is that?

But just wait, she isn’t finished! (You’ll probably want to grab a tissue or two before reading the rest of the letter.)

“So this year I want to make you something,” she wrote. “Tell me what you want this year, and I’ll make it.”

Okay, Nadia’s parents, what’s your secret to bringing up such an awesome little girl?

Diana says Nadia thinks about others all year round, not just during the holidays.

“Nadia has the best heart ever,” she said. “When she was five, she cut off her waist length hair and donated it to Locks of Love. There was a year when we had to rebuy her school supplies a couple of times. When I chastised her about being careless, she told me she had given them away to some classmates who didn’t have many supplies. This year, she gave all of her money to a charity fundraiser at school. She doesn’t get an allowance, so it was money she had saved here and there.”

It hasn’t been an easy year for this generous little girl. Her family adopted two older children and it took some adjusting.

“We learned how to be a family this year,” Diana explained.

In spite of these changes and challenges, Nadia has adjusted to them very well and she always remained positive.

“It never occurred to her that she was sharing Mom and Dad with strangers or being jealous,” Diana said. “She is an amazing child!”

Though Nadia said she doesn’t want anything for Christmas, her mother vows this won’t happen.

“She still doesn’t know what exactly she wants. I even had Santa ask her when we took her to see him and she said, ‘I don’t know.’”

Santa did get back to Nadia about what he wants for Christmas, sending her a letter through Twinkle the elf. His requests were rather simple: chocolate chip cookies, a glass of almond milk, and a drawing by Nadia of the perfect Christmas tree. He told her to leave these items for him on Christmas Eve.

Diana and her husband have been floored by the public’s response to their daughter’s letter.

“We didn’t expect such a beautiful and positive response to our daughter’s letter,” Diana said. “We cried together at what amazing things people had to say.”

Nadia’s letter has helped her mother answer a question all parents will ask themselves at some point while raising their children. Am I doing this right?

I don’t think Diana needs to worry about whether she’s raised a good child. Nadia’s a thoughtful, considerate, kind young girl who has a good head on her shoulders. Her thoughtfulness would make any parent proud!

Were you touched by Nadia’s sweet letter to Santa as much as we were? So share this!