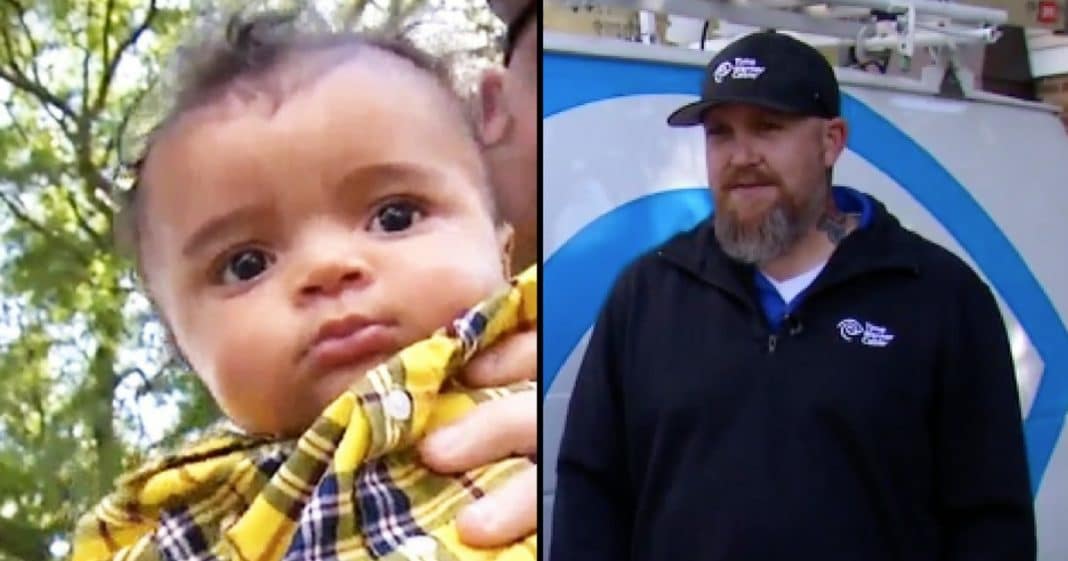 As parents, we wish we could always be by our children’s side – watching their every move, being there to kiss all their scrapes and bruises. The truth is, it’s impossible to keep your eyes on them every moment of every day.

But what would you do if you found your little one unresponsive? Tough to say. Ultimately, you’d jump in and save your baby’s life; but emotions can get in the way, especially when it comes to those we love.

Angela Sanders is the mother of five-month-old Dakota. One day, while in her apartment with her little guy, Angela walked into the room and noticed her son sitting in his bouncy chair, bleeding.

Cable technician Daniel Craft had just finished his work at the apartment complex and was in his truck ready to head to his next appointment when he heard a woman screaming from inside.

Craft hurried from his van, rushing to the unit where he heard the commotion. There he found baby Dakota unresponsive and not breathing. The cable technician called 911 and dove into action to save the little man’s life.

Dakota was cold to the touch and his skin was blue; but thanks to his military background, Craft knew what to do.

“I propped his head back, and he was still blue, so I thought there was something in his mouth, or he was choking,” Craft said. “I put my finger in and swept it through his mouth to clear his throat. As I pulled my finger out, I still had my ear down there, and I heard him starting to gurgle and his stomach just raised. He started breathing again.”

Craft communicated with the 911 operator until the paramedics arrived. Baby Dakota’s savior even visited his little patient in the hospital the next morning just to be sure all was well.

At the hospital, doctors discovered that Dakota had stopped breathing because of a ruptured hernia that brought on a seizure. Thankfully, he is expected to make a full recovery.

Everyone now refers to Craft as a hero.

“He is a hero. I am grateful he saved my baby,” Sanders said.

Before leaving the hospital with her little one, Sanders took a CPR course to prepare her if something similar ever happens to tiny Dakota again. Thankfully this time, though, Craft was close by and saved the baby’s life.

Do you agree that Craft is a hero? So share this!