Mom Asks Her To Do Maternity Shoot. Stuns Her With ‘Guests’ That Have Whole Internet Buzzing 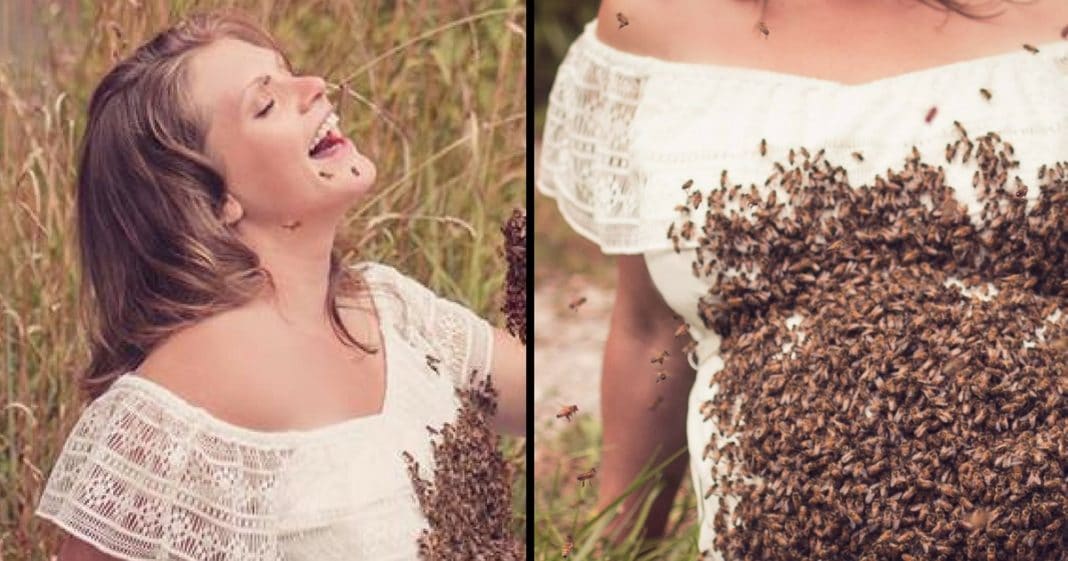 As a photographer, you have to be prepared to receive some odd requests from clients. Some might want to wear costumes or have their pictures taken in strange locations. Others may insist on a certain pose, even though you don’t think it’s a great one.

But while photographer Kendrah Damis has seen her fair share of “interesting” shoots, this one left her buzzing with shock.

“Ever have a once in a lifetime experience??” she asked in a Facebook post. “Well that is what I got when I was hired to do maternity photos for Emily Mueller.”

Emily is one of Kendrah’s good friends, and she also happens to be a beekeeper and bee rescuer. She and her husband Ryan run Mueller Honey Bee Removal, taking honey bees from locations where they are unwanted and moving them to safer areas where they can thrive.

“Honeybees are responsible for one in every three bites of food we eat,” Emily says. “If we don’t have bees, we don’t have food and we die.”

Emily is currently pregnant with her fourth child, and she’s not planning on having any more after this. She wanted to commemorate the pregnancy in a special way, and that’s when she came up with the idea to incorporate bees into the shoot.

“Bees represent life and death,” she said. “We’ve had three miscarriages, so these pictures are dedicated to life and death, to all of the children we’ve had.”

When Emily first brought up the idea, Kendrah didn’t think too much about it, but when it was time to release the bees, she started to get a little nervous.

“When the bees were there, I was a little uneasy, of course, but Emily was so calm and her family was so calm, it just really helped,” the brave photographer said.

The bees were actually a swarm the Ohio couple had rescued that morning from a Wadsworth park. When bees swarm like that, Emily explained, it means they are looking for a new home. Before they leave their hive with the queen, they fill their bellies with honey to build a new hive.

“When their bellies are full of honey they don’t bend and they won’t sting or attack since they don’t have a hive or babies to protect,” Emily noted. “They are focused on a new place to live.”

Emily also fed the honey bees some sugar water before the shoot to be extra sure she was completely safe.

To get the bees to land on her belly, Emily held the queen bee in a small cage in her hand. The 20,000 bees then swarmed their queen, using Emily’s belly as a landing place.

“It’s no different than a tree or a fence,” Emily explained. “They were looking for the pheromones of the queen.”

Emily and Kendrah both knew the photo shoot would cause a bit of a stir, but they were shocked when the photos started to go viral. In just a couple of days, the photos have been viewed by millions of people around the world.

Kendrah is happy the photos are getting so much attention, but she is even more pleased that Emily loves the photos she took.

“It’s just what I want my photography business to be about — making my customers happy,” Kendrah said. “I wouldn’t have done this for just anyone, but I know Emily is a talented beekeeper.”

As for Emily, while these photos may have people buzzing around the internet, she is happy to have these pictures to remind her of this special time and of what’s important in life.

“I am just a beekeeper, but first and foremost I am a mom,” she said. “Beekeeping is how I get to stay home.”

Were you shocked to see these bees swarming around Emily’s pregnant belly? So share this!