Army Vet Suffering From ALS Miraculously Walks For Son’s Air Force Graduation: ‘God Was With Me’ 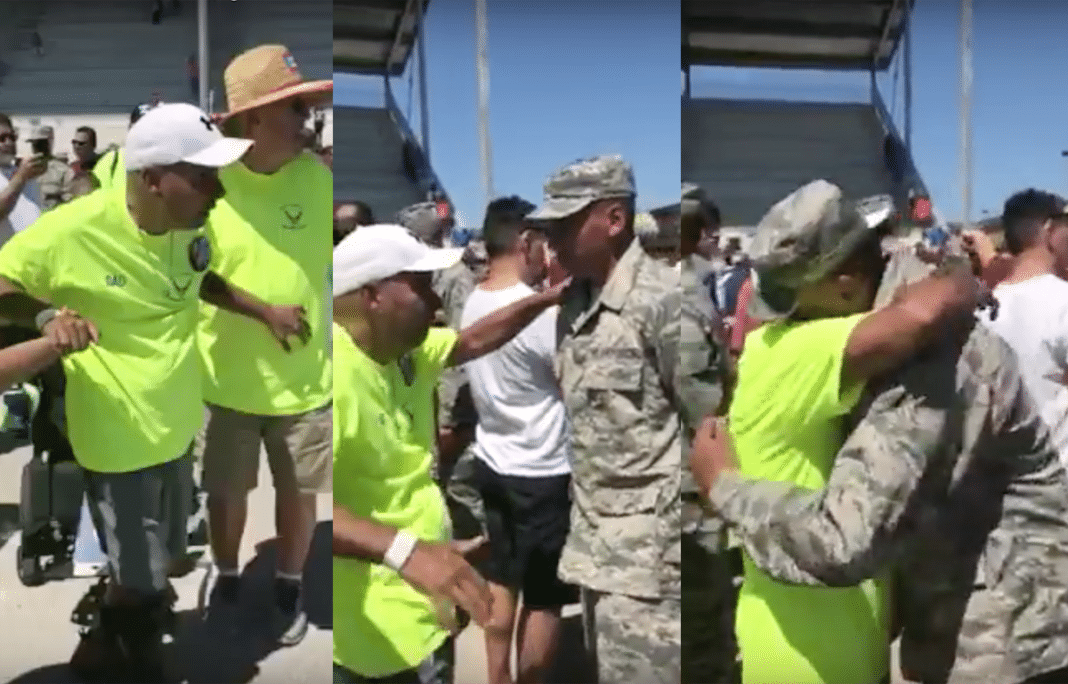 A 56-year-old proud father and Army veteran of 22 1/2 years, Frankie Sanchez shared one of the most poignant moments of his life and it is surely one of the most beautiful moments we’ve seen.

Fair warning: You might need a Kleenex after you watch the video below.

The moment came when he was recently able to stand and walk for his son’s graduation from basic training from the Air Force. Two years ago, he was diagnosed with ALS, also called Lou Gehrig’s disease and he wasn’t sure he would make it, much less be able to stand.

He was determined to make it to “tap out” his son, an Air Force tradition in which new graduates stand at attention until they are touched on the shoulder by a family member.

After an 8 hour trip to San Antonio, Texas, he and his loving wife, Christy, arrived at their rental property. Then disaster struck: Sanchez’ breathing machine broke down, and without it, he would not survive.

They would have to wait in the Emergency Room until another machine was available, but that meant they might miss graduation.

“My wife stayed by my side the entire night and sobbed. We were both so devastated that we were going to miss this once in a lifetime event. We had traveled to graduation with several family members so our son would have his loved ones there, but I needed to be there. I don’t know that I’ve ever prayed more for God to help me.”

The next morning, the graduation ceremony started, and they feared they would miss it after reaching out to everyone they knew to help. Then suddenly, a man walked into the hospital room and offered Sanchez a new breathing machine. He only asked for his wife’s signature and sent them on their way. It was an answer to their prayers.

Exhausted and hungry but determined, Sanchez and his wife made a bee-line for the grounds where the graduation was held. They made it with just 10 minutes left before the tap out ceremony would begin.

“I decided when it was time to tap my son out that I wanted to get out of my power wheelchair and take a few steps and walk to my son. I was overwhelmed with pride for my country, for my son and I know I didn’t take those steps alone. God was with me. We made it, and it was a miracle.”

For more about this amazing man’s story and his battle with ALS, see the full post written by Sanchez here.

See the beautiful and touching moment in the video below: