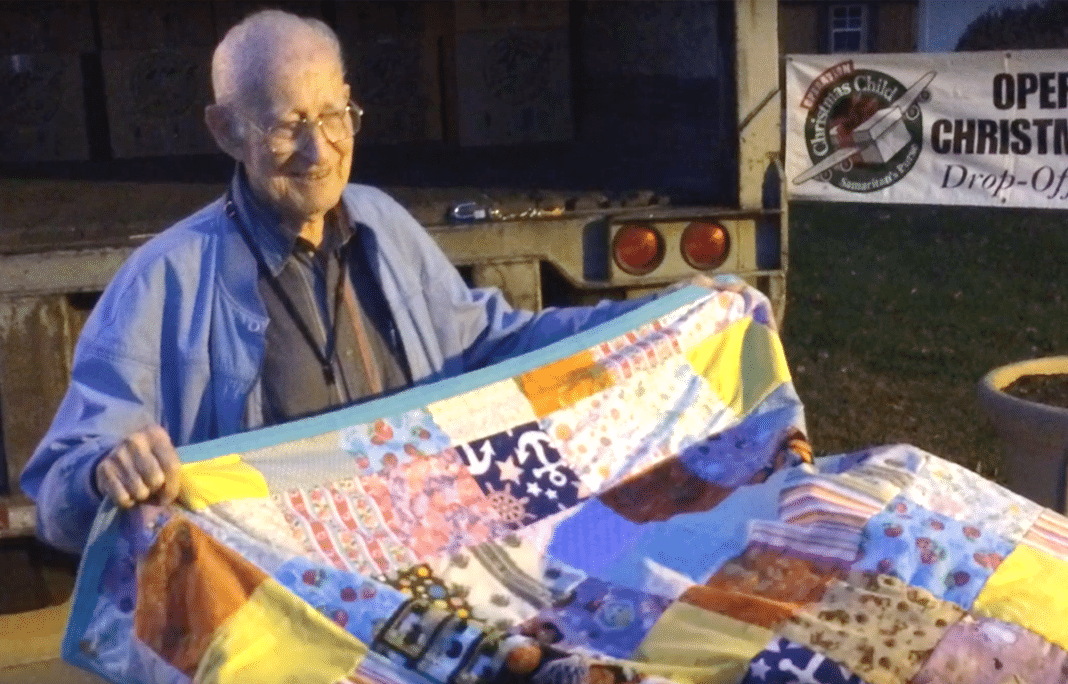 The secret to a long healthy life might be staying active and working hard. We recently shared the story of a 107-year-old Barber who still works full-time in New Windsor, New York. Now meet 98-year-old, Theron Jennings. The widower and World War II veteran took up a new skill several years ago at age 95, learning to sew quilts for needy children around the world. He’s inspired to help kids in wartorn areas, to let them know he cares, and to share his love for Jesus with personal notes.

Since this former U.S. Army Staff Sergeant from Hillsville, Virginia took up his newfound purpose in life, he has made over 500 quilts in three years, diligently working on them for hours starting early every morning. They are shipped out in shoebox gifts for Operation Christmas Child, a project of Samaritan’s Purse.

His daughter, Debbie Whattoff says her father loves sewing quilts. She hunts for bargains on fabric, and neighbors drop off scraps for him at his door to keep his supplies full.

“This is his day. This is his world,” said Debbie. “He loves it and it gives him purpose. He feels God has him here up to this age because he is to make quilts for children.”

Jennings uses a guide to cut six-inch squares out of colorful fabric of all kinds. He does it all by hand, showing amazing dexterity and control, not to mention vision that many half his age would find challenging. He then forms orderly piles of matched squares to use on his quilts.

Theron was a mechanic in the Army had never touched a sewing machine, although he remembered the basics from watching his mother as a 7-year-old child. She made dresses out of feed sacks during the Great Depression, and he and his six siblings had to make ends meet by living off the farm.

Today, his mechanical skills do come in handy, as he can repair his old family sewing machine from 1965 when it breaks. Other than his recollections from childhood, he is totally self-taught, improvising as he needs to.

He was inspired to begin sewing after hearing about children in Africa who had lost their parents when Muslim extremists attacked. He was surprised to learn that one of the things the orphans needed most were blankets to stay warm. Then he learned about Operation Christmas Child and knew he wanted to help.

Today, he works on the 4-by-4-foot quilts on the floor of his apartment in Savoy, Illinois, which requires a lot of mobility. Fortunately, he doesn’t have any issues with that either.

“I’ve worn out two or three pairs of pants on my knees,” he said 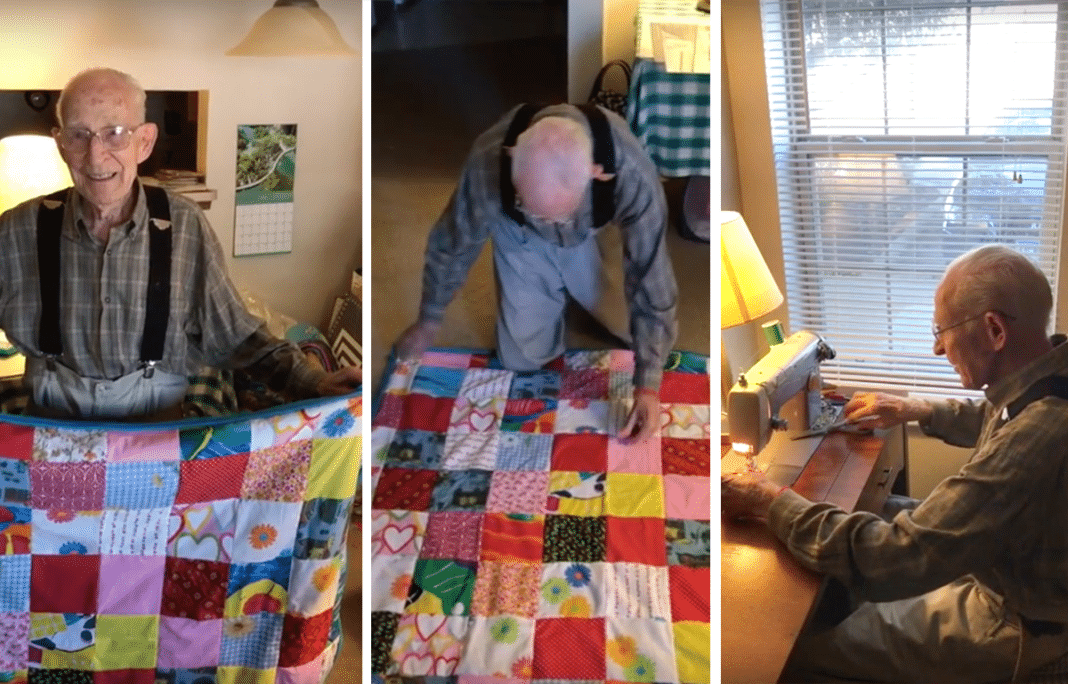 Staying busy with work appears to have been a key to longevity that Jennings learned about years ago. He remembered the wise words of another nonagenarian who he spoke to as a younger man.

“Years ago, there was a man that was about my age and I asked him what was your advice for staying you, and he said to work hard and stay active,” Jennings.

You can learn more and get involved with Operation Christmas Child on their Facebook page and website.

See an interview with Theron Jennings in the video below: