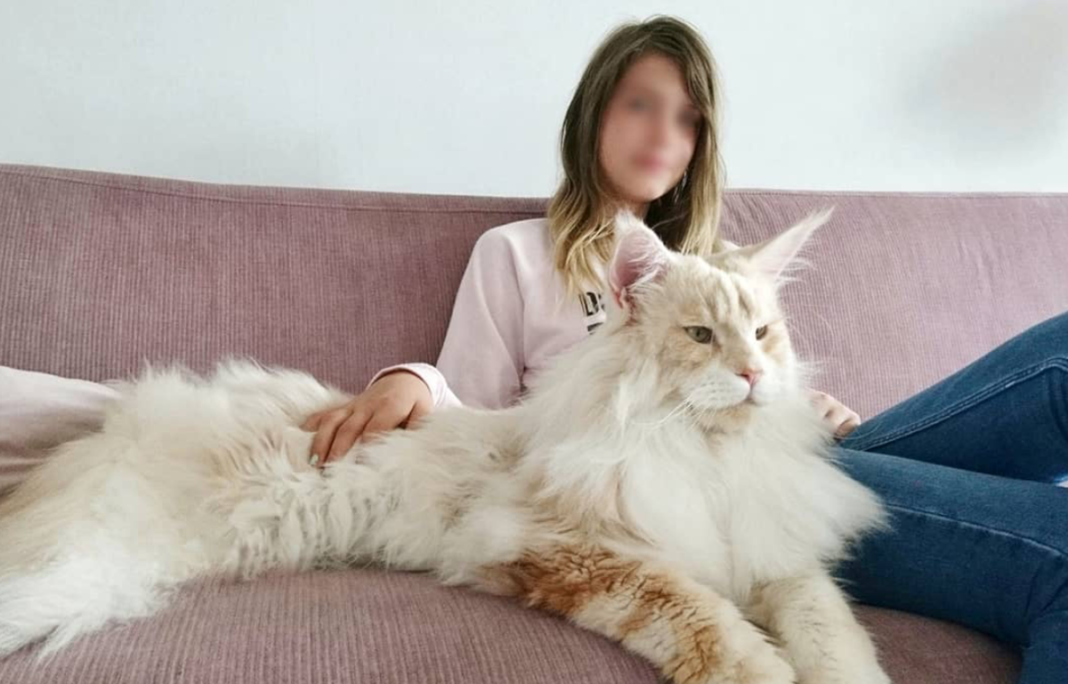 Since the early 19th century, Maine Coon cats have been roaming the state of Maine. The large breed’s origins are mysterious. Some say the hardy and heavy longhaired breed arrived in America by sea centuries before the arrival of Columbus. The first Main Coons may have arrived with the Vikings. Clearly, they are cats evolved to live in harsh winter environments, with heavy water-resistant coats, Lynx-like tufted ears, and large padded feet.

For those who haven’t met a Main Coon, the size is a shock. Some large males can weigh 20 pounds or more, although most of them weigh from 9 to 18 pounds. As big as they are, they behave much like overgrown kittens, with adaptable and generally friendly dispositions towards their family and other pets.

A typical response to seeing a large Main Coon:

A 3-year-old Main Coon from Norway who lives in Sweden has really captivated Instagram followers. Lotus is 22 pounds. His family shares pictures and videos with his cat friends, 6-year-old Lady Marion, and 9-year-old Chivaz. They all live indoors, but the inquisitive and majestic felines follow their family around the family cabin.

Lotus has over 160K followers, and you can see why when you see how beautiful he is. He looks regal sitting on a snowy fencepost surveying his domain, like a wildcat.

When you see Lotus alongside his human momma, his giant size is startling.

It’s a good thing that Main Coon cats are known for their goofy and playful dispositions because you can see how powerful they are. As intimidating as they might look, they rarely meow, are generally affectionate, and clown-like. They enjoy human company but don’t need constant pampering or attention.

Here, you can see that Lotus is quite the couch potato.

Occasionally, a Main Coon can strike a ferocious pose, but they usually end up looking a bit goofy instead. For cat lovers, they are always endearing and lovable.

You can see that Main Coons have impressive paws, perfect snow shoes to get around in a winter wonderland.

Another Main Coon cat who has risen to stardom on social media is Sampson, who may be the biggest cat in New York. The six-year-old Main Coon weighs in at 28 pounds and is four feet long. Sampson has over 180K followers on Instagram.

“He’s the largest cat in New York. I’m waiting for a challenger to step up and say they’ve got one larger. It’s going to be tough though. He’s a big boy,” said Sampson’s human, Jonathan Zurbel.

ME-WOW!!! Who doesn’t love a larger than life cat? This was in the NY POST 3 years ago and it changed my life!!

Zurbel is inseparable from Sampson after adopting him from his brother. He even walks Sampson in a stroller around New York. Passers-by are impressed by his size and gentle demeanor. Zurbel says his feline wing-man has helped out his love life.

“He’s 100 percent Playboy and he gets me a lot of dates and admirers.”