Man Wades 12 Miles Through Flood Looking For Dad, Then 1 Phone Call Leaves Him In Tears 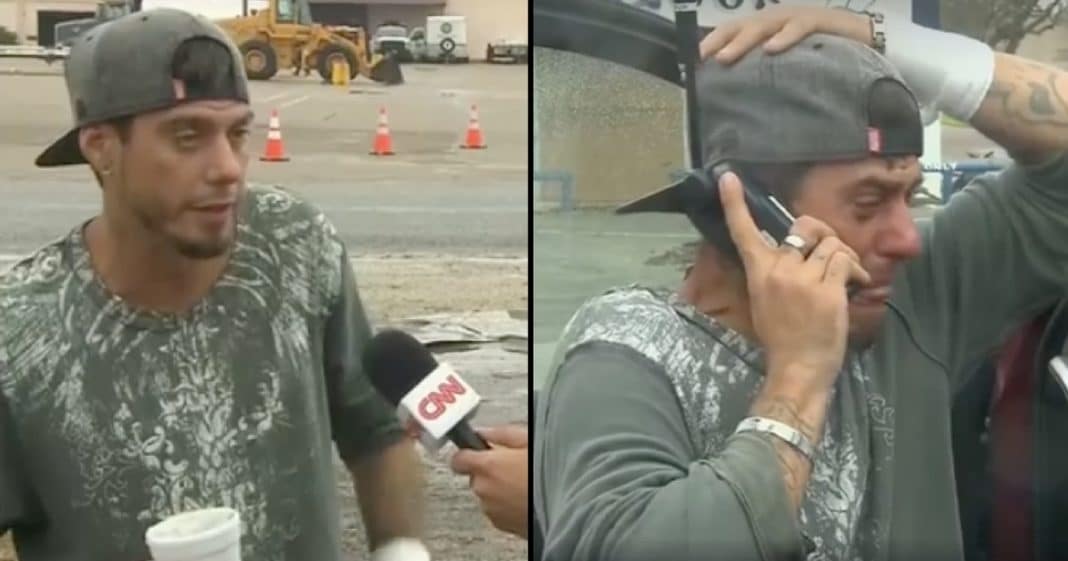 The aftermath of Hurricane Harvey will affect those in Texas and the rest of the United States for years to come. But along with the stories of devastation and destruction, there have also been stories of hope, resilience, and love. These will endure long after the memories of the storm fade.

One such story is that of Aaron Mitchell. Mitchell, a resident of Aransas Pass, Texas, walked 12 miles to locate his father. Though he had lost everything in the hurricane, he refused to give up searching for his father.

As Mitchell spoke with CNN you could hear the emotion he attempted to hold back and see the tears he struggled to keep at bay as he described the destruction Harvey left in its wake.

“I felt like The Wizard of Oz, man. I was scared. I’ve seen a lot of things, but that terrified me,” he said.

“I just lost everything I worked for. Everything,” he continued. “The only thing I got is the  clothes on my back.”

Like many Texans, Mitchell was left homeless by the hurricane. He will need to start over. But Mitchell isn’t so worried about the possessions he’s lost – he’s more concerned about the people in his life.

Mitchell reached out to the news station’s audience for help to locate his father.

“There’s been no cell service since Thursday, Friday,” he said. “Haven’t gotten ahold of anybody. If my mom and dad are watching, I’m okay. My mom’s in Oklahoma and my dad, there’s no telling where my dad’s at. I’m here in Rockport, waiting on you.”

“Dad I love you,” Mitchell said as he broke down in tears of relief after finally heard his father’s voice.

Soon after, Mitchell, along with other Aransas Pass residents, boarded a bus bound for Austin. There, he would be reunited with his father.

Were you as touched watching Mitchell finally connect with his father as we were? So share this!