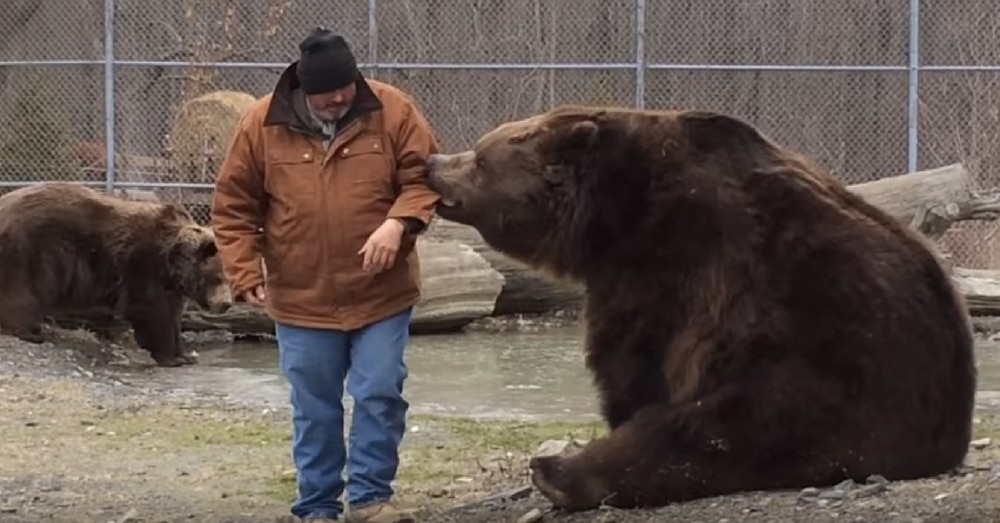 It’s a video that looks like it’s about to take a bad turn. As animal rescuer Jim tries to leave 1,500-pound bear Jimbo’s pen, the massive animal grabs onto his jacket sleeve with his teeth and pulls him back.

“Bye Jim! We like you a lot!” says someone off-camera.

It’s almost too scary to watch, but thankfully this encounter has a happy ending!

Jim works with animal rescue organization Orphaned Wildlife. The group provides “safety and nurturing to orphaned animals and prepare[s] them to return to a life in the wild.”

Jimbo actually came to Orphaned Wildlife as a cub when he suffered a serious leg injury. While the organization would have loved to see him back in his native habitat, it was better for the bear’s health to stay at the rescue center, and Jim and Jimbo have since become great friends.

It turns out Jimbo didn’t have any malicious intent when he grabbed Jim’s arm. In fact, he was just looking for a little bit more love! Jim caved (it would be hard to say no!) and spent some more time scratching the giant bear’s back before he had to go.

Click below to see their sweet interaction for yourself:

Were you amazed to see this unlikely friendship between a man and a bear? So share this!