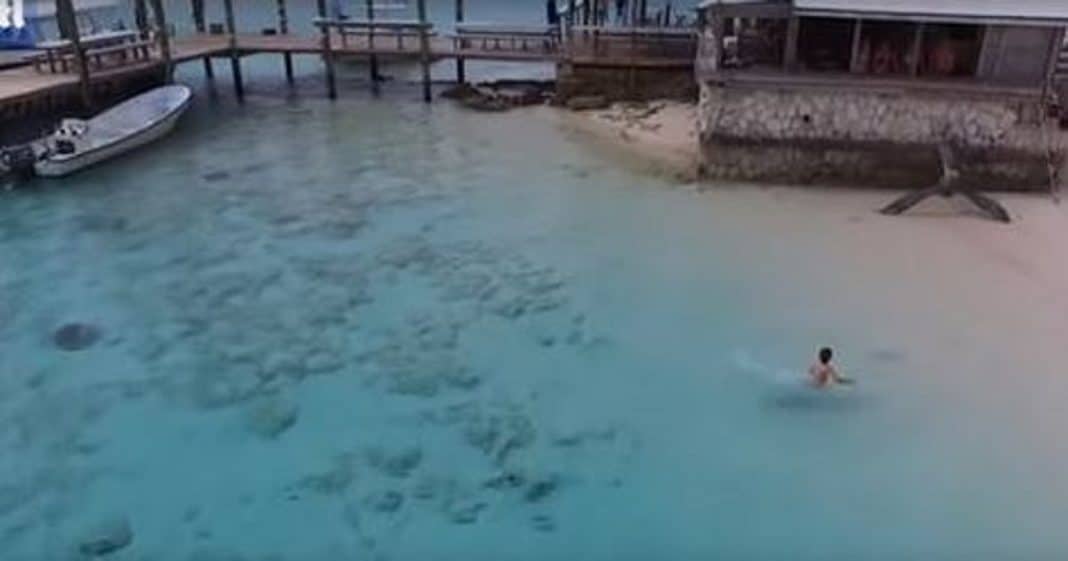 The older I get, the more aware and afraid of the world I become. At a young age, I was pretty much brave enough to do anything, and no place was too dark or too scary for me go – including the ocean. By the age of 13, I had already been scuba diving, swimming with dolphins, zip-lining in the jungle, snorkeling with sting rays, and kayaking in the mangroves.

Once I started watching “Planet Earth” documentaries and studying wild life, the fears began creeping in. I became knowledgeable of what was actually out there in those habitats that I so willingly invaded. Knowing this, and realizing how intolerant some of those animals can be, I decided that those kind of adventures were just not for me. I was scared that one day would be the wrong day for me to be around.

One little boy experienced this exact alarm, and it was all caught on a drone.

Artem Tkachenko was enjoying his day on one of the lovely beaches of the Bahamas, and he wasn’t alone. Families and couples were laying out on the sand, when the little boy decided to go for a swim in the clear water.

Simultaneously, Mr. Tkachenko launched his drone into the air to capture a view of the island, and what he saw sparked panic inside of him.

From where he and the others were standing on the shore, what was lurking in the water was practically invisible; however, from his drone, he saw four sharks quickly approaching the little boy in the shallow.

The boy took heed to his instruction and ran straight out of the water, just in time for the sharks to turn away in his absence.

It is a relief that we don’t have to imagine what would have happened if Artem Tkachenko had not decided to fly his drone over the ocean. His attention and quick reaction saved that boy’s life!

Thank God that everyone is safe, and hopefully something like this does not happen again.

You can watch the entire situation, along with an interview with Mr. Tkachenko, in the video below.