Man Saves Stranded Octopus, But The Way Creature Thanks Him Is What’s Taking Internet By Storm 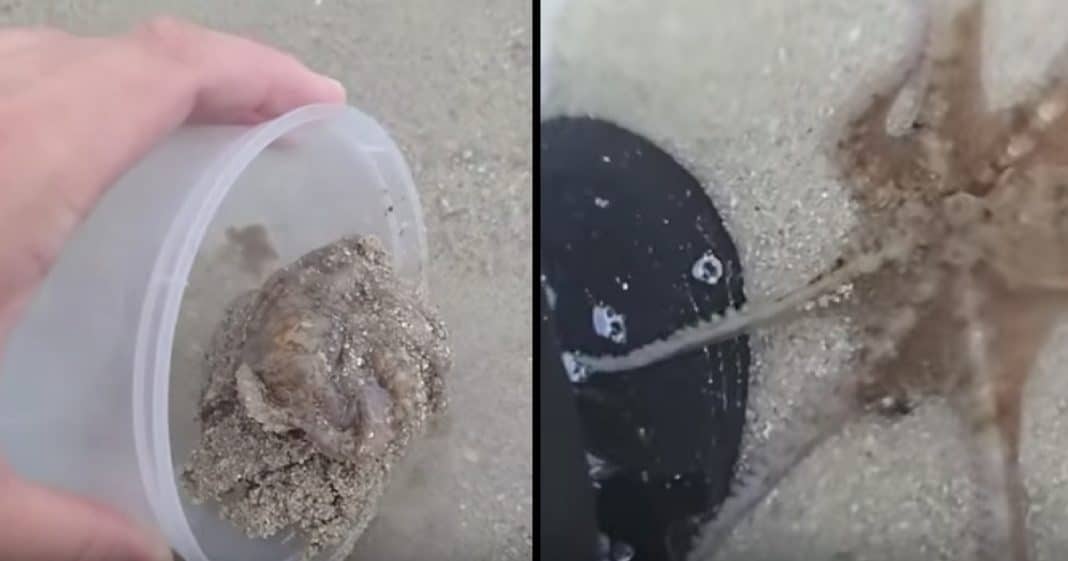 There are many octopuses in the ocean. How many, scientists are not sure of, but we know there must be over a million.

Surely losing one octopus life would make no major difference to the world’s octopus population. In fact, many would agree it wouldn’t make much of a difference to anyone at all.

But it did make a world of difference to one stranded little octopus to have its life spared by a complete stranger. And what this little creature did to show his gratitude is taking the internet by storm.

In the video, one can see that the little octopus was on its last legs (pun intended). The poor creature was looking dehydrated and shriveled up from being without water for so long.

Just when it looked like all hope was lost, a kind man who had been taking a walk on the beach decided to give a helping hand. He took a clean plastic cup and scooped up the stranded octopus. Then he transported the tiny tide victim to deeper water.

You can see how the octopus starts to transform as soon as he is placed in a healthy, moist environment. The resuscitation in and of itself makes this video beautiful to watch, but it’s what happens next that is truly incredible.

The octopus, now revived and moving around, makes a bee line for the man’s boots. He places one of his tentacled legs on the man’s foot and pauses, long enough to look like he is thanking the man for saving his life.

You may have heard the old adage to show kindness and, when necessary, use words. No words were needed between these two species as they shared this special moment in time, a moment that may not have seemed like much to anyone else on the beach that day, but one that was important to one little overlooked creature struggling for his life.

Were you amazed by the way this octopus thanked his rescuer? So share this!