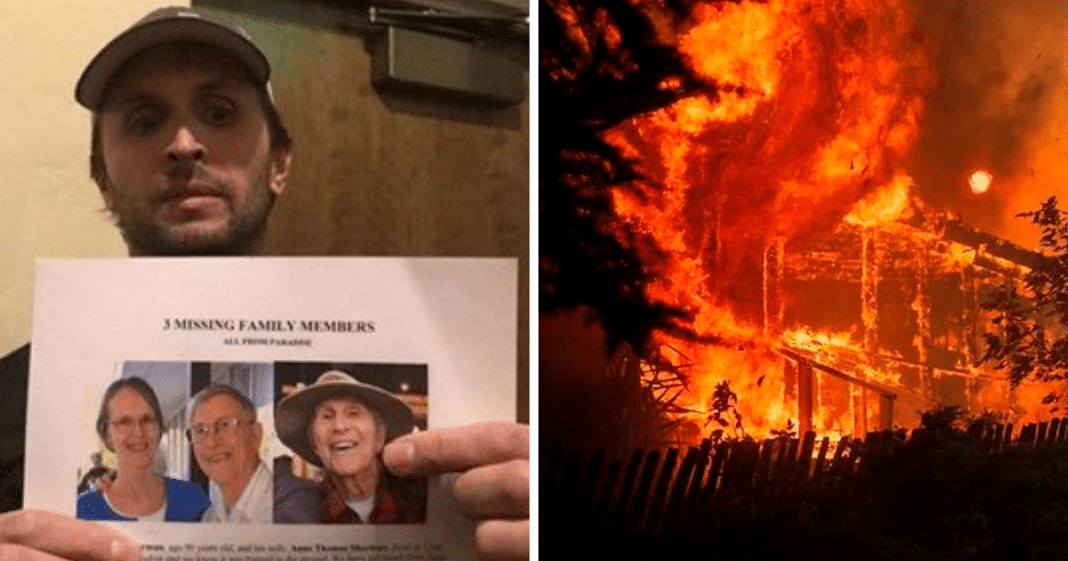 John Warner drove for four hours from central California to find his 96-year-old grandparents, Fay and Anne Sherman in the scenic town of Paradise. He feared the worst, hearing the news that whole towns had gone up in flames in the Sierra Nevada foothills. Now the fire had reached Paradise and he couldn’t get any news of their whereabouts for three long days.

The “Camp Fire” is now the deadliest and most destructive wildfire in California history. It was named after Camp Creek Road, the location where the fire started. So far, at least 48 victims have been killed. At least 8,817 structures have been destroyed and hundreds of people are missing. In all, 203 square miles have been scorched, and the deadly fire is still burning. Over 25,000 people had been evacuated and displaced to multiple shelters.

Warner knew his search would be more difficult because his grandparents didn’t use cell phones and wouldn’t be able to mark themselves safe on a website. He had to go in person, so he traveled to the designated shelters, one by one, searching for their faces. At the Oroville shelter, he was relieved to find his aunt and uncle, but they didn’t know what happened to Fay and Anne. They had tried to find them but were stopped by authorities in the mass evacuation. 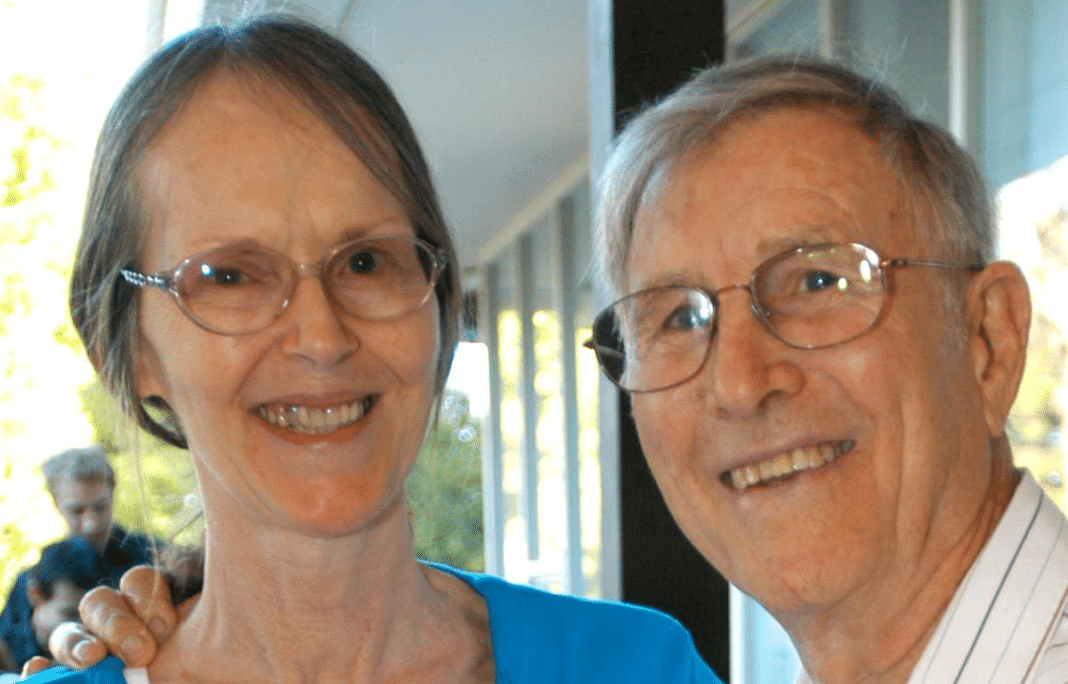 Still, Warner didn’t give up hope. He knew his grandfather was resourceful and strong.

“My grandpa made it through WWII,” he said.

“I wouldn’t put it past him to get in his old truck and drive himself out of there.”

For days after the Camp Fire destroyed Paradise, California, John Warner's grandparents were nowhere to be found. But he refused to stop looking.

He continued to the next shelter and stopped to ask anyone who would listen to help him find them, carrying a homemade flier showing their faces. He asked Sheriff Kory Honea for help, but the sheriff was overwhelmed with over 120 missing-persons reports and constant calls from frightened citizens. The sheriff was serving as both law enforcement and coroner and over 23 bodies had already been found.

Warner was interviewed by the local news and shared the story of his missing grandparents, showing the pictures of his veteran grandfather and wife. He was about to head out to the next shelter when he got a sudden flood of phone calls. A shelter worker who had seen him on TV said they had seen his grandparents at a church shelter in Chico.

He drove to the shelter and walked into the dimly-lit warehouse around 10 p.m. Then he spotted a familiar looking face.

They shared an emotional embrace, knowing that many others had lost their lives that night.

“The old guy got in his truck and got them out of there,” he said. “I love you, Grandpa.”

Fay and Anne were safe, standing next to a cot. Fay was wearing his blue cap reading, “veteran,” which could have helped the shelter worker recognize who he was.

Fay explained their harrowing escape as flames came just 15 feet from their door. The couple didn’t drive anymore but fortunately still had their old orange truck. Fay couldn’t see well enough to drive, so Anne served as Fay’s eyes. She directed him as he slowly drove away with the flames all around them. 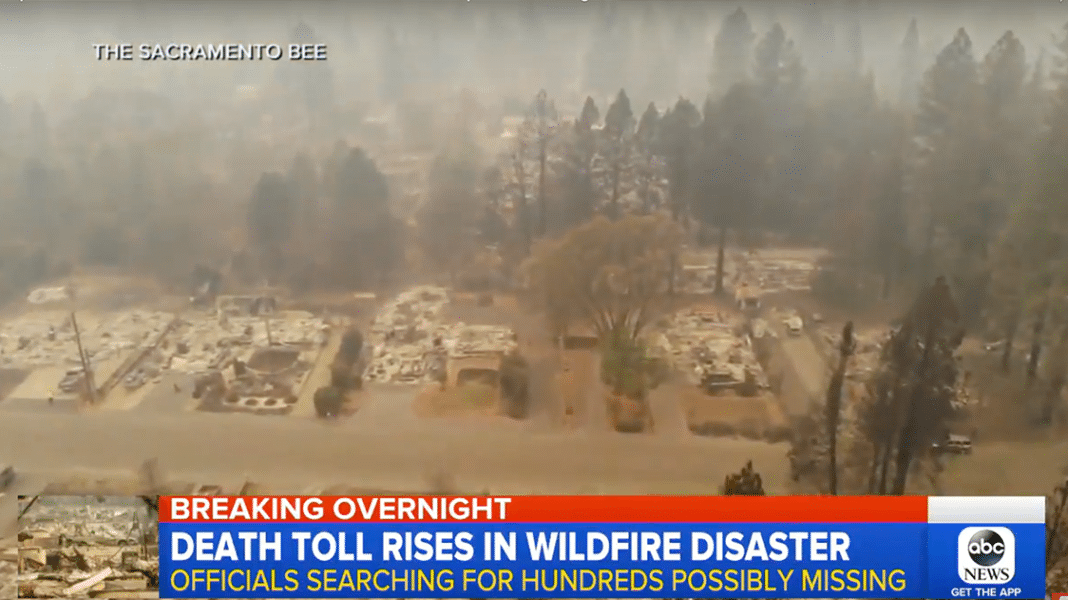 Anne described the horrifying scene as the couple made a slow escape. They drove only 15 miles per hour for 5 hours but eventually and miraculously made it to safety.

“The fire was everywhere,” she said. “This is the most terrifying thing I’ve ever experienced. I prayed and prayed.”

“It was scary. Fire on both sides, praying it wasn’t going to come up on us,” she recalled.

The couple slept in the truck in the parking lot of an IHOP restaurant. The next morning they found Anne’s daughter, and she directed them to the shelter.

Anne Thomas Sherman and Fay Hubert Sherman miraculously made it out. Fay was a WWII veteran who had survived the war, and now was one of the lucky ones to survive the Camp Fire. For many others, they can only hope they will hear from their missing loved ones again.

He went shelter to shelter looking for his grandparents

As the fires got closer and closer to where his 96-year-old grandparents lived, he got more and more worried. They don't use technology and his grandfather is blind. Then his phone rang.

More from the Sacramento Bee: