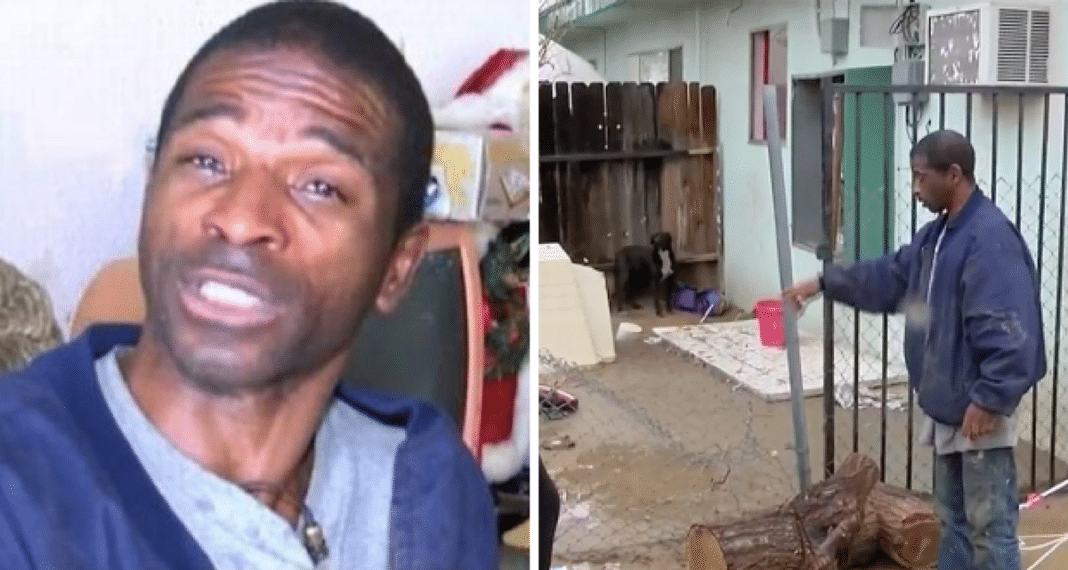 While hanging out with friends in his California neighborhood of North Edwards situated near Edwards Air Force Base, Dwayne Pressley heard a terrible noise. He had to investigate. He discovered a 2-year-old little boy had fallen from a window and into a dog pen, where the family’s dog, described as a pit bull, had attacked him.

Pressley said he had no time to think. He ran towards the yard, ripped down the chain link fence and snatched up the boy from the dog’s grip.

“I thought he was dead. He was sitting there in a crouched position covering his eye.”

Pressley described the frightening rescue to KBAK. “You know he was cold and wet and so I put him inside my jacket, and I’m trying to hold him and trying to get out the gate at the same time. And the dog is coming at me, coming at me, going this way, going that way. So I’m trying to get help so I can get the kid out of the yard and protect myself at the same time. Oh man. Eternity. Like it would never, like it would never end.”

“It exposed his eye back to the cheekbone…the dog had already had the side of his face eaten, and it was horrific for me but I had to overcome it and do what I had to do and put the child in my arms and protect him from the dog. It was a reaction anyone would’ve done”, said Pressley.

A 2-year-old boy was being mauled by a pit bull. Dwayne Pressley saw this and immediately jumped into action, saving the toddlers life. Dwayne is a hero in my book, but he won't say so. Here is his story.

Though there were others who witnessed the attack and were too frightened to intervene, Pressley says he does not view his actions as heroic. He fought back tears as he explained he just did what he had to do.

The child suffered severe facial injuries but is expected to make a full recovery. Deputies learned the boy’s mother, Samantha Meyers, 22, had fallen asleep and did not realize her son had been attacked; authorities told KERO.

“During the course of the investigation, there was a lot of things in the house that were hazardous, not safe to be living in,” Sgt. Michael Dorkan of the Kern County Sheriff’s Department told KGET. “There was an 8-month-old that was at the house so child protective services responded and took the second child into custody.”

The little boy’s parents who are also the dog owners were both arrested for felony child endangerment. They pleaded not guilty and are expected to return to court on April 3rd.

“I went to work at 11 yesterday morning and I come home to my kid, everyone telling me my kid got messed up by a dog and Kern County Sheriffs at my house. I’m getting put in cuffs and I didn’t understand why. I’m there part-time Sometimes I’m there, when we’re fighting I leave for 4-5 days. But I can take the responsibility now. I see what Kern County (sheriffs) is saying. I should’ve gotten up and did something. If I saw the house was a wreck I should’ve gotten up and cleaned it”, said Nathan Alvey, 25, the boy’s father and owner of the dog.

It was a horrible scene. But everyone, including law enforcement, agrees it would have been so much worse, had it not been for the man who stopped everything to save the toddler’s life.

About 4.5 million dog bites occur every year in the United States. Here are tips for being safe around man’s best friend.