Man Goes To ATM To Get Some Cash, Then Finds Mysterious Note That Leaves Him Stunned 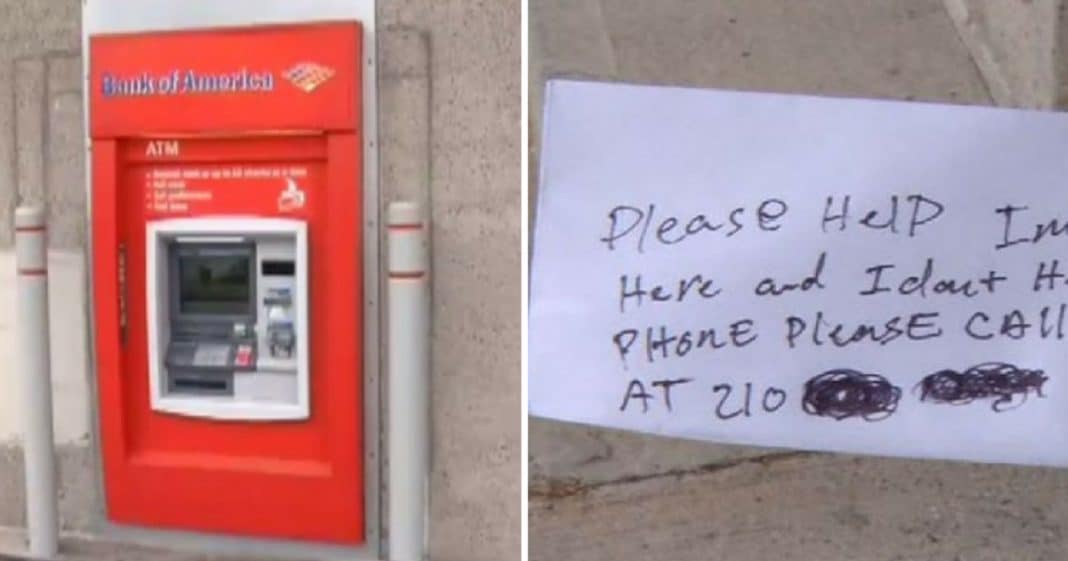 It’s always smart to remain vigilant when using an ATM. Regardless of the hour, mishaps do occur that can bring immediate danger…or in this particular instance, confusion.

Earlier this week, a man flagged down a police officer in Corpus Christi, Texas, with a strange tip: Along with dispensing money, a local ATM was also spitting out handwritten notes with the plea, “Please help.”

This wasn’t an actual tip, the responding officers thought. It had to be some gotcha joke, and if they fell for it, they’d suffer the brunt of the teasing. Nevertheless, they had a job to do, even if it made them seem foolish.

On their arrival at the Bank of America branch, they inspected the ATM and all appeared normal…until the machine started talking.

“Sure enough, we can hear a little voice coming from the machine,” said Corpus Christi police officer Richard Olden.

Officers kicked down the door and exposed the writer of the desperate notes. This mystery messenger was a contractor hired to fix a door lock. The man became locked inside the service room that holds the ATM and got trapped behind it. He had forgotten his cell phone and the device needed to open the door from the inside.

The repair man wrote several messages and put them in the drive-through ATM, which patrons collected as they withdrew cash. It’s unclear how many notes he wrote or how many were discovered. One note that was taken by a local news station read, “Please help. I’m stuck in here, and I don’t have my phone. Please call my boss.” The number for the man’s boss was included below.

The officers finally freed the contractor. Since no crime was committed, there are very few details about this incident. After confirming the man’s identity and employment with his superior, officers released the relieved man.

We’re certain the next time the man has to repair a door lock, he’ll be sure to have his cell phone handy, or at least the necessary tools to ensure he’s able to free himself.

In all seriousness, circumstances could’ve been much different for him if the concerned citizen hadn’t provided the officer with the unusual tip. It doesn’t hurt to report something out of the ordinary – you could be saving a life. Maybe even your own.

Were you as shocked by the predicament this man got himself into as we were? So share this!