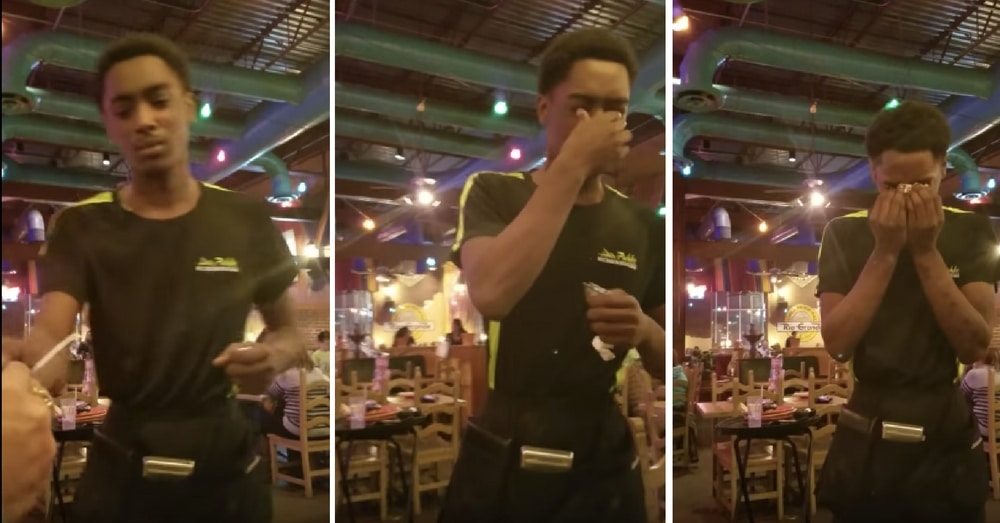 Maurice Green was at dinner with his family when he noticed that their waiter seemed to be having a bad day. He decided he wanted to bless the young man and help encourage him.

When the waiter came back to the table, Maurice asked him his name and how his day was going.

The waiter said his name was Johnny and admitted that his day had been “kinda rough.”

“I wanna sow into your life,” he told the young man.

Johnny couldn’t believe it and his eyes immediately began to well up with tears.

“You just paid off my car, sir,” he told Maurice before shaking his hand.

But Maurice wasn’t done yet!

“I can sense you’ve been working hard, and I think you done had a bad day,” he told Johnny. “And so God told me to sow into your life big time.”

Then he did something that left Johnny totally stunned and in tears.

Click below to see what Maurice did for Johnny:

“Keep being who you are, keep being nice, don’t let people frustrate you, because people are not nice, and this family – the Green family – wants to bless you. Merry Christmas,” Maurice told the grateful young man before doing something totally unexpected.

“You know what? Let me do better than that,” Maurice said as he handed Johnny two more 100 dollar bills.

“I’m into blessing people,” he told the emotional young man.

The world would be a much better place if we all showed love and kindness to others and shared blessings in unexpected ways. We only hope Maurice’s video will inspire others to do the same!

Were you touched by what Maurice did for this young man? So share this!