Man Flags Doctor Down At Gas Station. When He Opens Car Door He Can’t Believe His Eyes 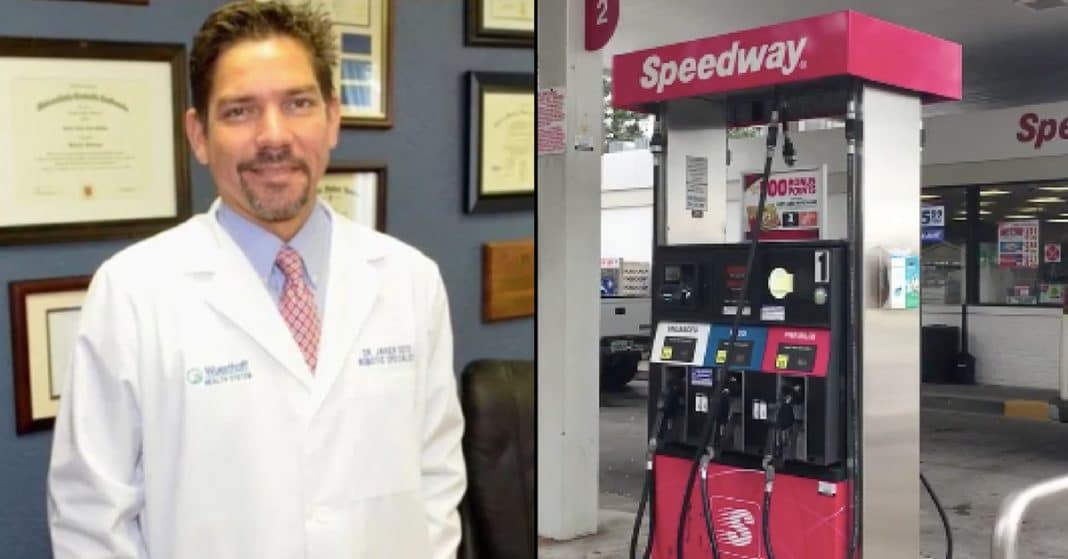 Have you ever been in the right place at the right time? Call it coincidence if you will, but there’s something unexplainable when this happens. It’s as though all the stars aligned or angels above ensured you’d be where you were needed right when someone needed you the most.

That’s what happened for an obstetrician from the Orlando area this weekend. The Merritt Island Speedway gas station became the scene of a makeshift delivery room as the OBGYN and staff worked together to safely deliver a woman’s baby who couldn’t wait to be born.

“It wasn’t just any doctor. It was the right doctor,” said Ahmed Rasheed, a customer who was at the store around 7 p.m., when the birth happened. “He was just here pumping gas.”

Dr. Javier Soto was approached by a desperate man whose fiancee was about to deliver their baby in the backseat of their pickup truck.

“Oh my God! What am I going to do?” the man gasped into his cell phone before he spotted Soto at the pump. Dressed in his blue hospital scrubs, the OBGYN was on his way to deliver another baby at Rockledge Regional Medical Center.

“I was just pumping gas over here, and this guy asked, ‘Hey, are you a professional?’ and I was like, ‘Sure, what’s going on?’ She’s crowning,” Soto said.

The doctor rushed over to the truck. When he opened the door, he could see the baby’s head already on its way out.

Oddly enough, Soto actually recognized the woman! She was a former patient of his who’d had to switch clinics due to issues with her insurance.

Soto told the father-to-be to hurry inside the gas station to find scissors and gloves. He then asked the couple’s friend, who had been driving the truck, to hand over his shoelaces.

With items in hand, Soto slipped on the gloves and told the woman to push with her next contraction.

With just one push, the baby boy entered the world!

Soto noted how quick the delivery was, lasting only about four minutes.

“Normally patients in the hospital push for an hour or two,” he said.

Soto dried and massaged the little one until he cried. He then used the shoelace to tie off and cut the umbilical cord.

Of the new mother Soto said, “She has an angel watching over her, that’s for sure.”

Both parents are “very thankful” Soto was there. The doctor is glad he was there, too.

“I was thinking, ‘Thank God everything came out fine,'” he said.

“She’s the luckiest girl in the world,” Soto said.

He noted that this unexpected birth took place on the twelfth anniversary of his mother’s death.

“God has a purpose for everything,” he said. “He put me there for some reason.”

After finishing things up with this little family, the doctor went to deliver the baby he was scheduled to before meeting up with the mother in need.

We’re so glad Dr. Soto was right where he needed to be at just the right moment! And we know this new mom and dad are very thankful too!

Were you surprised by this incredible birth story? So share this!