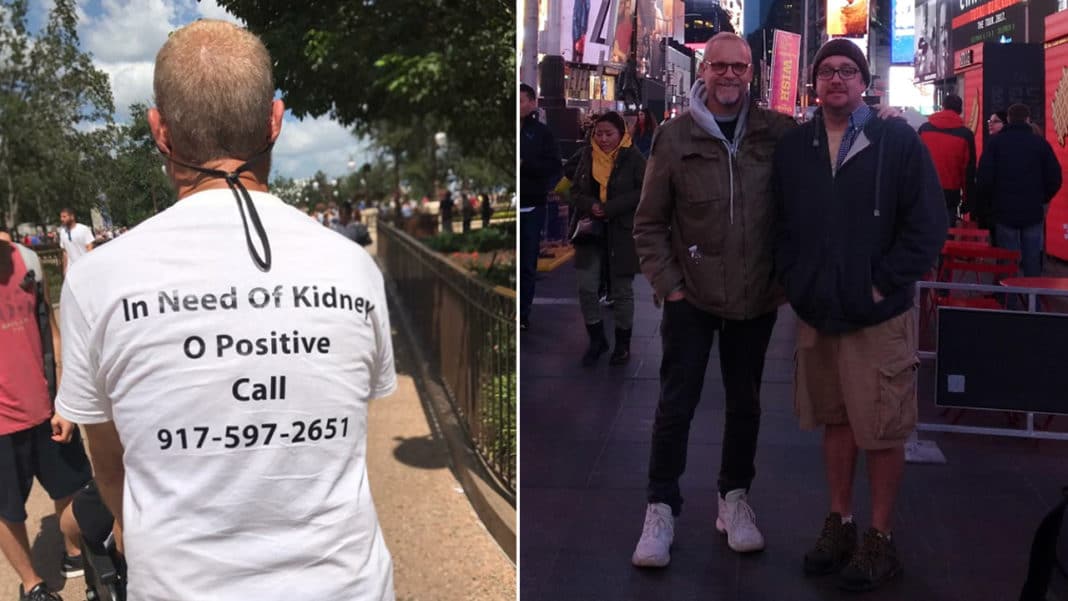 It’s never pleasant to find yourself in a desperate situation. We’ve examined all our options and spun the scenario over and over in our minds and come up with nothing when we’re forced to think out of the box. We cross our fingers and go for it, all the while hoping and praying for a miracle; one we know may not come. But for one desperate man, he got lucky.

Father of five, Robert Leibowitz has suffered from chronic kidney failure for years. He feared he wouldn’t survive while waiting to receive a new organ. He wanted to be with his children and family, but he was out of options. He had to take his future and place it out there for the world to see.

Last year, Robert had an idea. He created this ad he put on a tee shirt which he wore on a family vacation to Disney World. The ad read: “In Need of a Kidney. O Positive.”

“I’m going to be in Disney, my favorite place on the planet,” he told Inside Edition. “Maybe there will be a little pixie dust. Never in a million years did I think this shirt would save my life.”

While at Disney, a couple noticed his shirt and posted a photo of it on social media. It went viral almost immediately. The picture eventually reached Richie Sully of Fort Wayne, Ind.

“My first thought was, ‘How desperate is this guy? He’s on vacation advertising with a shirt saying basically, ‘Help save my life,'” Richie said.

Incredibly, this total stranger decided to take a chance. Richie boarded a bus to New York just to see if he and Robert would be a match. Miraculously, they were compatible. Both men were surrounded by loved ones at New Presbyterian Hospital on the day of the transplant.

Richie was first to go under the knife. Surgeons went through the delicate process of harvesting his healthy kidney. Next, it was Robert’s turn.

Surgeons removed the kidney from the container it was stored in and placed it inside Robert. And that’s how two total strangers became bonded for life.

“I can’t put into words how to thank him, but I’ll try for the rest of my life,” Robert said.

I’m sure for Richie, no thanks are necessary. Pure human kindness caused him to get on that bus; and it’s all do to Robert’s clever idea.