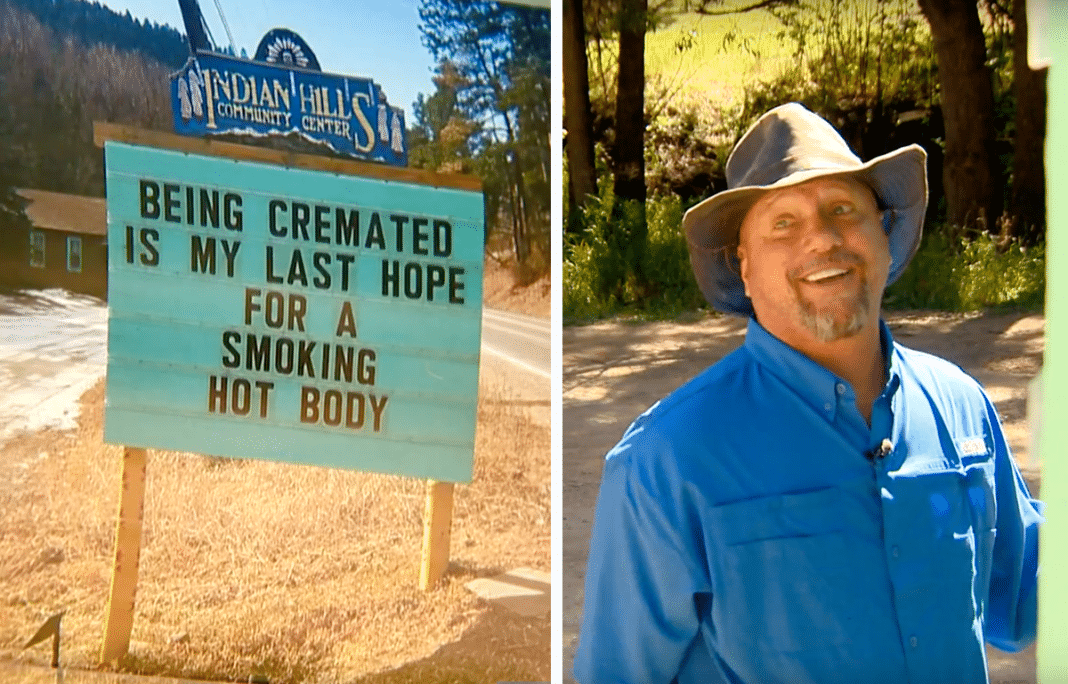 Sometimes you have to make your own fun. About six years ago, Colorado resident, and dad, Vince Rozmiarek did just that. In April 2013, he posted a witty one-liner on the sign he built for the Indian Hills Community Center, where he volunteers.

Rozmiarek was tasked with building a new sign because the old one was too small.

“They had a little, tiny sign and asked me to build a bigger one, ” Rozmiarek explained to NBC affiliate, 9News.

For a time, Rozmiarek kept it ordinary and square, posting information about events at the community center, from birthdays to veteran events. Then finally, on April Fool’s Day, he got a chance to show off his wit. He posted something that some of the locals recognized as a joke because it was widely known that the Morrison Police often set up speed traps in the area.

The sign got lots of attention, and not all good. Some people called the police to see if it was actually true, not getting the humor. Nevertheless, Rosmiarek was hooked and there was no turning back.

“I could not believe how many people were calling the police,” Rozmiarek joked. “I really had the people at the Sit N Bull bar scared out of their minds. I did that and just decided that got a lot of attention so I’ll start throwing things up there.”

After that initial April Fool’s joke, Rozmiarek started posting funny sayings and puns as much as three times a week. His ideas come from all over, but sometimes he runs them by his wife, Kirsten to see if they’re a winner. Although some of the sayings can be cheesy, she doesn’t seem to mind. After all, Kirsten runs a restaurant near the community center specializing in mac and cheese.

“He’ll give me a list and if I chuckle, he’ll be like ‘alright, which one made you laugh?’ And that’s the one that he puts up,” says Kirsten.

The signs have gained attention all over the world after becoming big news in Indian Hills, southwest of Denver. The community center started sharing the signs on social media in 2015, and many of them have been shared thousands of times. The signs have become so popular that if you put the town’s name in Google, one of the first stories to come up will be referencing Rozmiarek and his trademark sign.

With the help of Micahlynn Kaza, the Indian Hills Community Sign Facebook page has grown to reach over sixty thousand followers. People from all over the planet enjoy seeing what the goofy dad comes up with next.

“It’s quite hilarious, really, seeing how far the sign has spread and how much people love it,” Kaza said.

“I think it’s quickly becoming the ‘thing’ Indian Hills is known for.”

Kirsten Rozmiarek acknowledges that her witty husband is making people from all over the world smile during tough times.

“It makes people happy and we need that right now,” said wife, Kirsten.

This Colorado father seems to have found his niche making people from all over the globe smile, putting the “fun” in “dysfunctional,” along the way, as one of his signs points out.