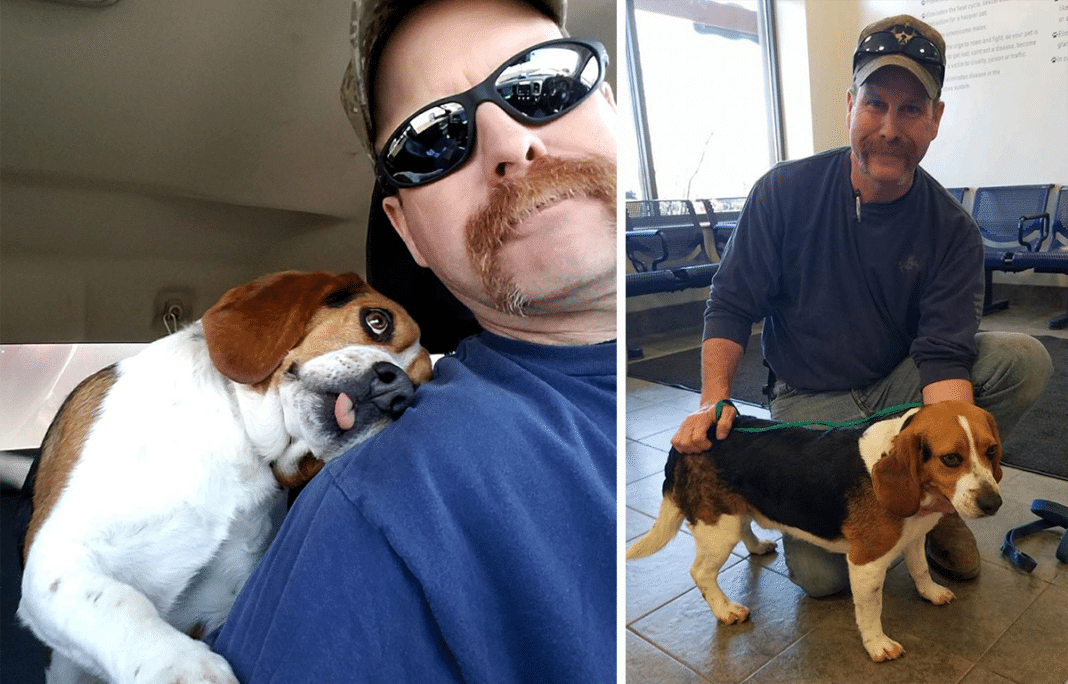 It’s got to be one of the cutest and most heartwarming photos of a rescued dog ever. Shenley Kirk shared a picture after her husband Joe rescued a 2-year-old beagle from certain death at a shelter in Ohio. The picture says it all as the beagle named Gregory gives Joe a hug and lowers his head onto his shoulder, looking at him with what certainly appears to be loving gratitude.

“The BEST Freedom Ride Picture EVER! Pulled from the Euthanasia List at FCDS today by HOUND Rescue and Sanctuary,” wrote Schenley.

See the adorable photo that went viral below:

The BEST Freedom Ride Picture EVER! Pulled from the Euthanasia List at FCDS today by HOUND Rescue and Sanctuary, "…

Posted by Schenley Hutson Kirk on Tuesday, May 1, 2018

“All (Gregory) wanted to do was to be touching me and cuddling up against me (during the car ride).”

Shenley and Joe have seen this kind of gratitude many times before, as founders of a dog rescue group called Hound Rescue and Sanctuary. Their mission: Helping overlooked unwanted neglected dogs.

This time they got to share the moment with everyone after driving for 2 hours to save Gregory.

Thankfully for all of us, Gregory got a bit of special treatment, being allowed to ride in the car behind Joe rather than in the crate. Joe thought the beagle had been caged for too long and deserved a special “Freedom Ride.”

“My husband knows better than to be taking pictures when driving,” said Schenley. “When my husband sent me these pictures my first reaction was, ‘Honey, why isn’t he in a crate?’”

“Joe later joked to his wife, saying, “Don’t you feel bad (for getting annoyed) now that it went viral?”

The odds that Gregory would make it were slim to none, being found as a stray and ending up at Franklin County Dog Shelter in Columbus on April 25th. His diagnosis of heartworm meant an expensive round of treatments. The shelter would opt to put him to sleep.

Fortunately, his guardian angels at the rescue group spotted him first.

The couple saved Gregory’s life more than once, as they were able to get him the treatments for heartworm thanks to generous donations. Now the beagle is recovering, a process that will take two months.

Not only that but sharing his story on Facebook promptly led to lining Gregory up with a forever home.

A couple in Columbus are adopting the beagle as soon as his heartworm treatment is over and the veterinarian gives him the green light.

Gregory’s adorable display of gratitude to his rescuers has touched people all over the world, bringing attention and needed support for efforts to rescue more precious fur babies like Gregory.

"GREGORY" is SAFE! Pulled by HOUND Rescue and Sanctuary! He was on the Euthanasia list at FCDS because he is Heartworm…

Posted by Schenley Hutson Kirk on Tuesday, May 1, 2018

See more in the video from CBS News below: