Man Attacked By Shark Rushed To Hospital, Then Doctors See Something In His X-Ray… 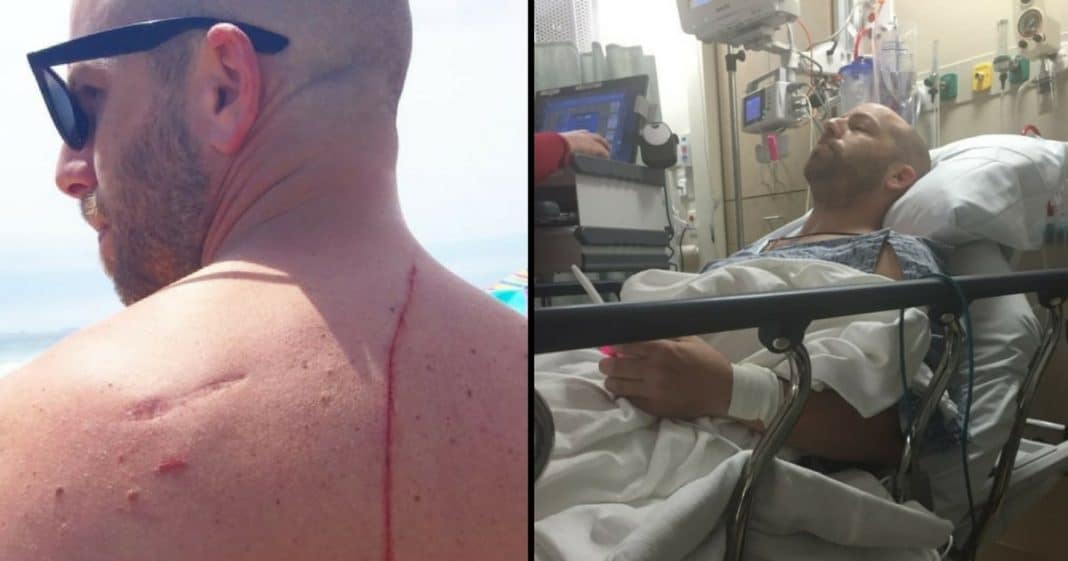 For most people, getting attacked by a shark would be one of the worst things that could ever happen to them; but for Eugene Finney, it was actually one of the best. That’s because his shark bite ended up saving his life…

Eugene was on vacation in California with his girlfriend and kids when they decided to take a dip in the waves near Huntington Beach.

As they bobbed in the water, Eugene suddenly felt a huge force on his back.

“As we started surfacing, something struck me from behind,” he recalled. “It hit me dead center in the top of my back, and it knocked us deep down, further into the water… I started swimming to get us to the surface…I was starting to get short of breath. It was pretty jarring. It kind of gave me an instant whiplash.”

Eugene was dazed after the blow and was focused on getting his daughter out of the water when she noticed he was bleeding. He quickly got out of the ocean and showered off so he could tend to his wound. The giant slice down his back hurt greatly, but he couldn’t figure out what had happened.

That is, until the next day when he was reading the morning paper and saw there was a shark warning at Huntington Beach. A surfer had been bumped by a great white right near where Eugene and his family had been swimming, and that’s when it all clicked.

Even though he was in serious pain, Eugene decided not to go to the hospital and finished out the rest of his vacation. On his flight back home to Massachusetts, though, the pain became so severe he knew he couldn’t ignore it anymore.

He went to the emergency room where doctors looked at his wound and took several X-rays and scans. A few hours later, they came back with some sobering news.

The bite itself wasn’t worrisome – it was just swollen and bruised and would heal soon. However, as they were scanning his body they found a tumor on Eugene’s kidney. The doctors ordered a second CT scan and Eugene waited nervously for the results.

When he went back in to see his doctor, the news was good. Although the tumor was relatively large – about the size of a walnut – the cancer had not spread. The doctor was confident that he could do a simple procedure to remove the tumor and Eugene wouldn’t have to undergo any radiation or chemotherapy.

After a minimally invasive surgery to remove about 20 percent of his kidney, the tumor was sent off to a lab to be tested. The biopsy proved the tumor was cancerous, but confirmed that the cancer hadn’t spread and Eugene was now cancer-free.

Had it not been for that shark on that fateful day, Eugene probably wouldn’t have known he had cancer until the tumor had grown and spread. Doctors say he could have gone months, even years, before knowing anything was wrong, and by that point the situation would have been much more serious.

Eugene says he considers himself to be the luckiest man alive, and now he has two scars to remind him of just how lucky he is and give him a new appreciation for life.

“If this didn’t happen with the shark, causing me to go in with this chest pain, I would have never known about this cancer,” he said. “I feel fortunate. I really feel like I’ve gotten a second chance at life and I’m not going to blow it.”

Were you amazed by Eugene’s story? So share this!