Man Arrested In Baltimore, But When Cops See Weapon Of Choice They Can’t Stop Laughing 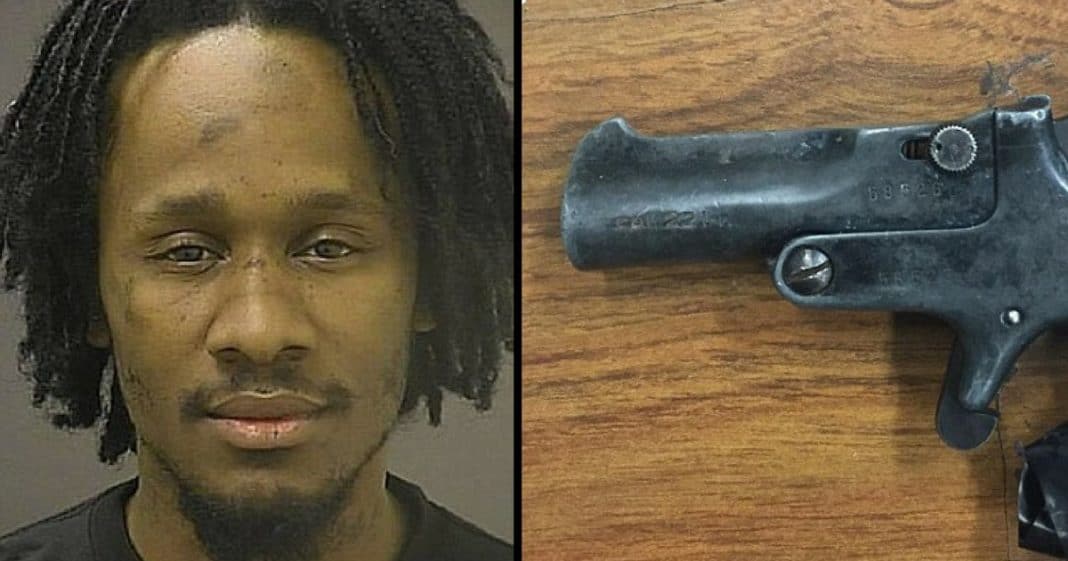 Usually arresting a criminal and getting them off the streets is a serious matter, but Baltimore police officers couldn’t hold back their laughter after arresting 36-year-old Keith Gladden.

Gladden was taken into custody after he was found to be violating his probation by possessing a firearm and having drugs in his vehicle during a traffic stop Wednesday.

The Baltimore Police Department posted a photo of Gladden’s weapon on their Facebook page, and it didn’t take long for the photo to go viral. When you see the gun you’ll know exactly why it has taken the internet by storm!

Gun enthusiasts quickly noticed that the gun Gladden was carrying seemed to be a little old. A couple of centuries old, to be exact.

The gun, which was partially held together with duct tape, looked like it came from the 1800s. It has quickly come to be referred to as the “Gettysburg” firearm.

Immediately the comments started pouring in, and they’re hilarious whether you know guns well or not!

“I was under the impression that John Wilkes Booth was no longer alive,” Michael VonSas wrote.

“This is the first gun you have access to in Grand Theft Auto: Gettysburg,” Steven Hill joked.

Josh Stavrakoglou had one particularly popular comment: “If it pleases the Peasants, brave Constables wish to inform us they have apprehended a young rapscallion armed with a pepperbox whilst operating his horseless carriage.”

Some commenters put the origin of the firearm even further back than the Civil War:

“Tries to warn the citizens of Baltimore that the British are coming…gets pulled over,” Matt Foley joked.

Some concerned citizens thought there were more important things to be worried about:

“I can’t believe this isn’t a bigger story the only person who could possess a weapon like this has to be a time traveler,” Wayne Kwame Kearney mused.

Em Diggs suggested that, “Somebody call the Smithsonian and let them know Baltimore PD found their missing artifact.”

Even the Baltimore PD got in on the action, writing, “If it pleases the court, we will ensure we safeguard this firearm and ensure the safety of all in the village of Lord Baltimore. Whilst this young lad possessed this weapon illegally, his punishment shall not include that of public stoning nor shaming. He therefore shall be recommended as a candidate for reenactment just up the road in Gettysburg.”

Gladden has not yet faced a sentencing, but a few commenters had some ideas about what kinds of punishment would fit his crimes.

“He will probably get a light sentence… Maybe just a public flogging or a night in the stocks,” Walt Keely joked.

Aaron Bethea had an even better idea: “All these comments should be read at his hearing. Should be punishment enough.”

We encourage you to read through more of the comments on the Facebook post! There’s enough there to keep you entertained for hours!

Did you find the internet’s reaction to this firearm as hilarious as we did? So share this!