Madman Confronts Cop With Knife, But Officer’s Next Move Is Taking Internet By Storm 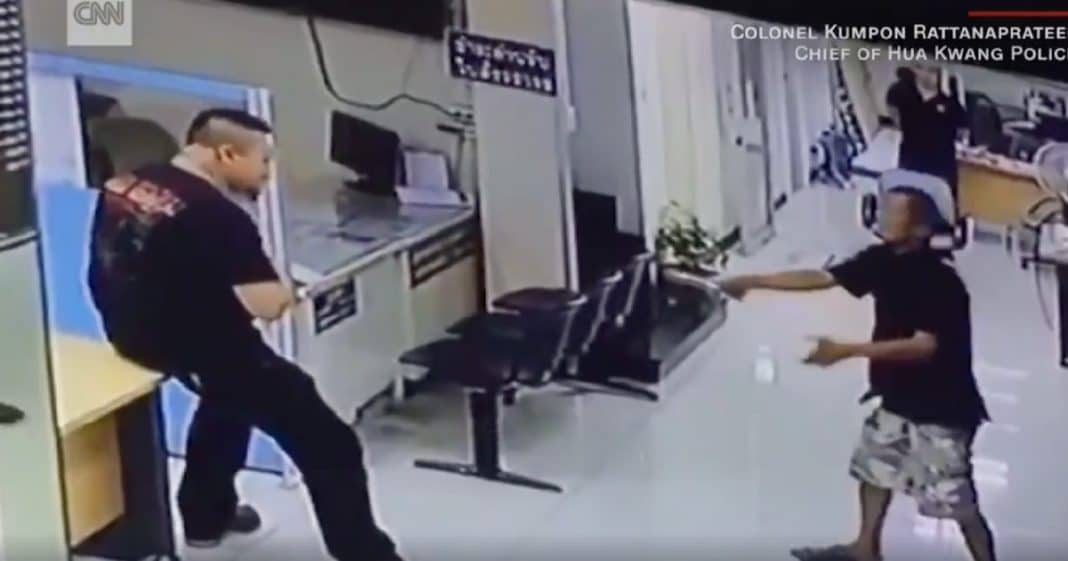 Police officers are often the targets of much criticism, yet they have to perform one of the most dangerous jobs on a daily basis to keep communities safe. Officers have to deal with people with a wide array of personalities and moods while never knowing what kind of situation will present itself from one moment to the next. They are expected to remain calm, yet assertive, at all times, always trying to respond in the most appropriate manner for each unique situation.

It’s not an easy job. That’s why the way a police officer in Bangkok, Thailand, handled and diffused a scary situation involving a 45-year-old man who entered the Huay Kwang Police Station with a knife is taking the internet by storm.

Officer Anirut Malee was on duty when an angry man entered the police station. The man was stressed after not receiving money owed to him and having some personal belongings stolen, and he held a knife to his own neck, threatening to take his life.

Instead of pulling out his gun or rushing the man, incredible security camera footage shows Malee calmly taking a seat against the counter and then disarming the assailant with his words.

Amazingly, the man lowered his knife and then offered it to the officer, and it’s Malee’s next move that has everyone talking. As the man handed the knife over and broke down in tears, Malee wrapped his arms around him in a warm, comforting embrace.

We all could learn something from Officer Malee – not just about using words instead of violence, but also about the incredible healing power of comforting physical contact.

According to studies, hugs have the potential to help us in many ways. They can reduce stress, pain, and depression by causing the brain to release serotonin and endorphins to blood vessels to create pleasure and negate sadness. Hugging also balances the nervous system, decreases the heart rate, and boosts your immune system.

Thank you, Officer Malee, for setting an example for us all of the positive power of kindness and compassion – and hugs!

Were you impressed with the way Officer Malee diffused this scary situation? So share this!