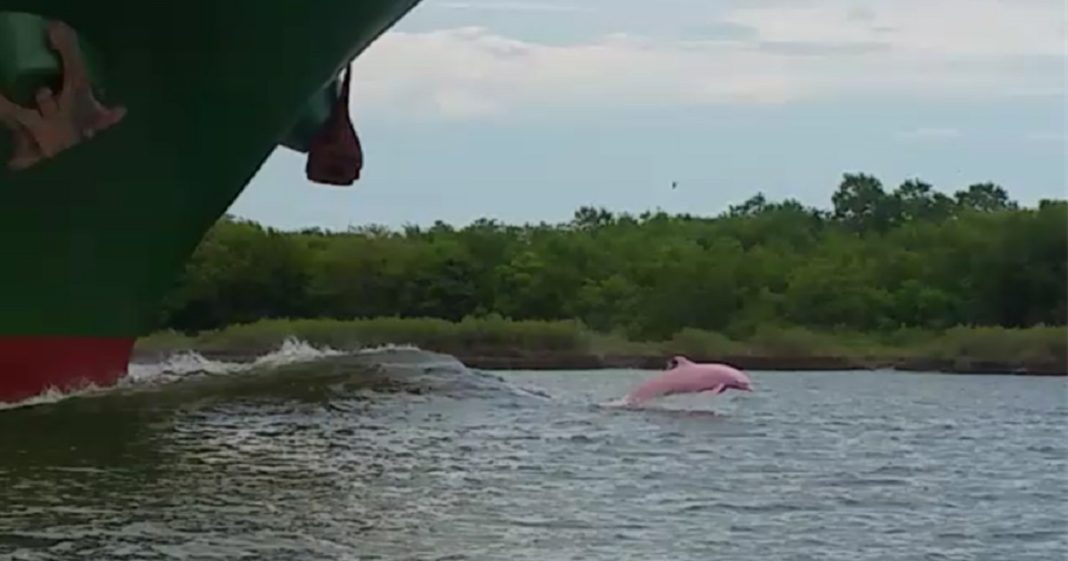 Dolphins stand out among their kind for different reasons, but one particular dolphin named Pinky is definitely one of the most isolated cases yet! This exceptionally rare dolphin has been making a sporadic appearance to Louisiana’s residents for a little over a decade now, and her name is a literal explanation of why she is so special – she is pink!

Yes, you read that correctly. A pink dolphin! As someone who spent her childhood as a Junior Dolphin Trainer, the younger me would have been so delighted by this news.

According to People, Pinky was noticed for the first time in 2007, just a calf swimming with her mother. It wasn’t long after being spotted that she made headlines.

More recently, the beautifully colored porpoise was detected by boaters cruising in Louisana’s Calcasieu Ship Channel. As if the sight of Pinky wasn’t astonishing and remarkable on its own, something equally, if not more, extraordinary seized the onlookers’ attention as well.

Some are saying that they didn’t notice just one, but two, pink dolphins swimming alongside their boat.

One woman, Bridget Bourdreaux, was on her pontoon boat when her eye caught the pair. “I about fell out the boat,” she recalled to KHOU. “I was like ‘Wow. That’s not a regular dolphin, that’s a pink dolphin!’”

Bridget said the dolphins were playing closely to the banks and in front of a big cargo ship nearby.

“My husband was driving the boat and one jumped 20 feet from our boat,” Boudreaux told WFLA. “We were just astonished. I couldn’t get my camera out fast enough.”

The other pink dolphin is believed to perhaps be Pinky’s offspring. Though she wasn’t able to get a picture of both porpoises, she did get an awesome shot of the dolphin completely out of the water. 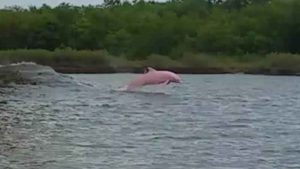 It is truly mesmerizing, like nothing I have ever seen.

The exact cause of the dolphin’s uncommon color is not yet known. Some are guessing that she is albino, others assume it is a genetic variation.

“So what they get from mom and what they get from dad means they can look a little bit different than that perfect image we expect,” Senior Rescue Biologist Kerry Sánchez of the Clearwater Marine Aquarium explained to WFLA. “Seeing an animal that is extremely light in color is not something we would normally expect to see, and in my full time here we’ve never seen an animal that looks like that.”

Whatever it is, I am thankful that it is not holding Pinky back one bit! Her lovely appearances throughout the years since her first emergence let us know that she is alive and well. If the dolphin with her was indeed her calf, she is doing more than just fine, and that is all that matters.

Pinky has become a celebrity in Louisiana, and her fans have even created a Facebook page in her honor that you can find here.

Watch the video below to see Pinky live in action for yourself. You will be amazed!