He Lost Friend In Orlando Shooting. Then Waitress Says Something That Gives Him Chills 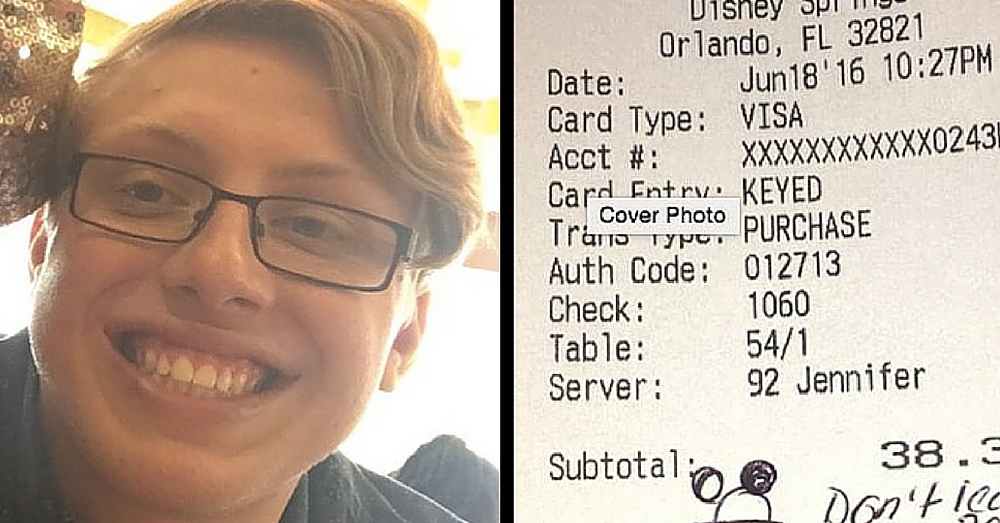 While it’s hard to imagine that anything good could come out of something as tragic as the shooting in Orlando, we have been privileged to see the ways in which people have rallied together and shown kindness to those who are hurting during this difficult time.

We have seen that in the hundreds of people who lined up to donate blood after the shooting, the Chick-fil-A employees who came in on their day off to make food for those who were donating blood, the hundreds on the JetBlue flight who showed love and compassion to the grandmother of one of the victims, and the churches that have offered free funeral services to the families of those who have died.

Recently, Twitter user Rayne and her boyfriend Brandon were able to experience some of this kindness firsthand.

The couple was having dinner at the Morimoto Asia restaurant at Walt Disney World and were impressed by how friendly and attentive their waitress, Jennifer, was. “It was honestly the best dining experience we’ve ever had,” Rayne said. “Our waitress talked to us about pretty much everything and genuinely seemed interested in each topic of conversation we had.”

Partway through the dinner, Jennifer noticed that Brandon was wearing a shirt honoring a friend of his who had been killed in the shooting. She brought them ice cream and gave them her condolences, acknowledging that it had been such a hard week for Orlando.

The couple was touched by her gesture, but they never could have imagined what she would do next.

When they looked at the check at the end of their meal, they noticed that Jennifer had written a zero (with Mickey Mouse ears) on the tip line and added a note that brought both Brandon and Rayne to tears.

“Don’t leave one!” the note said, referring to the tip. “Pay it forward. Do something nice for yourselves. So sorry for your loss. OrlandoStrong.”

The sweet note and generous gesture touched the couple deeply. “I love this city so much,” Rayne said.

After so much tragedy, what a gift it is to see that there is still good in this world. Human kindness and love will never be snuffed out by hate.

Were you touched by this waitresses sweet gesture? So share this!