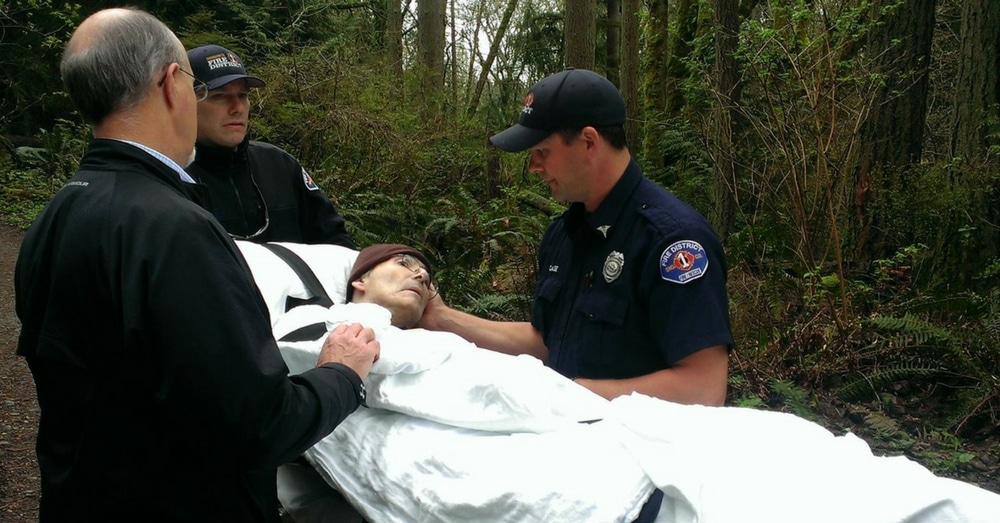 Edward Reis loved being out in nature. Nothing made him happier than spending time outdoors. He even made a career out of it – spending a good portion of his adult life as a forest surveyor.

Sadly, when he was diagnosed with multiple sclerosis in 2008, he knew that his time spent in nature would soon come to an end. He moved into the Evergreen Health Hospice nursing home in Edmonds, Washington, to wait out the rest of his days.

Realizing that his time on earth was drawing to a close, Edward confided in EvergreenHealth Hospice Chaplain Curt Huber that his dying wish was to go outdoors again. Curt contacted the hospice team who suggested he get in touch with the local fire department to see if they would be able to help transport Edward.

Together with Edward’s case worker, Leigh Gardner, Curt arranged for an EMS vehicle to pick Edward up and take him to Meadowdale Beach Park in Edmonds.

Edward was taken on a “hike” around the park in a gurney while different members of the group brought him “scents of the forest by touching the fragrant growth and bringing their hands close to Ed’s face.”

After so many years of pain and frustration at being cooped up indoors, this outing brought Edward more joy than they ever could have imagined.

“He was just smiling the whole time,” Leigh said. “He was saying he was so happy. He was incredibly grateful to us.”

Edward died just a few weeks after his final trip outdoors, but that day spent bringing joy and happiness to a man in his final days is one nobody in that group will ever forget.

Were you touched by what these firemen and hospice workers did for Edward? So share this!