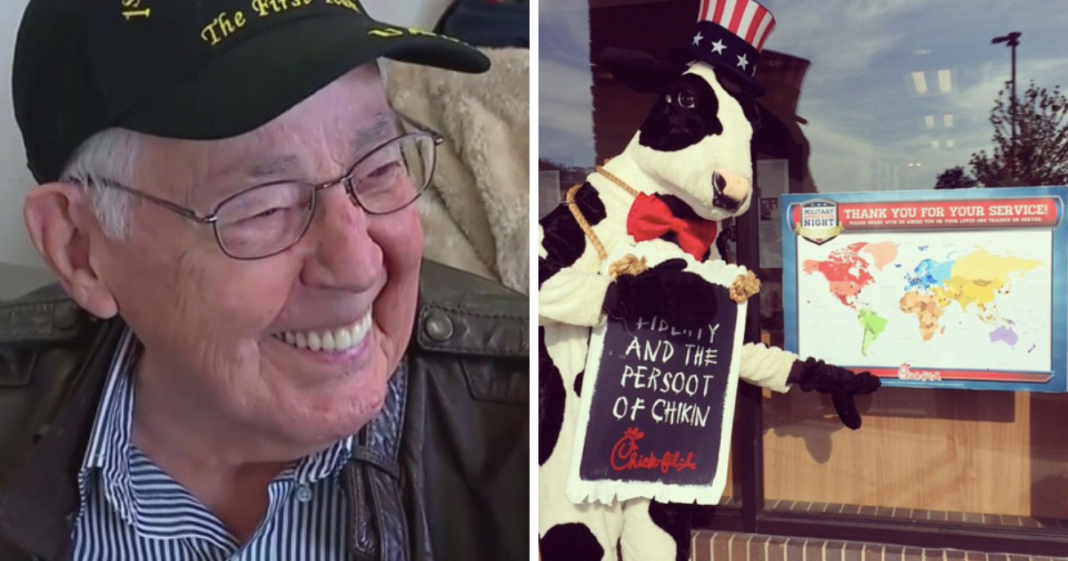 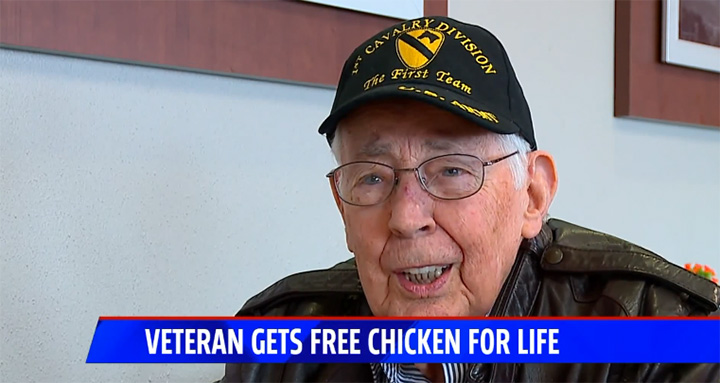 One man in Avon, Indiana will be able to eat one of America’s favorite fast foods for life.

A World War II veteran named Ernie, who is 92 years old, doesn’t have to worry about lunchtime. He’s a beloved near-daily customer at the local Chick-fil-A and loves the chicken nuggets.

“I like nuggets,” Ernie said with a smile. “And if you want a good one, this is the place to come.”

And he eats nuggets every day. A chicken nugget kid’s meal with root beer.

But what Ernie really loves is spending time with the young people who work at the restaurant. When they’re through with their lunch rush, many of them take turns sitting down with Ernie and enjoying conversation with the sweet elderly gentleman. In fact, they try to get through the lunch rush as quickly as possible so that they can take a break with Ernie.

“If we can get to Ernie, it’s been a good day,” laughed owner Chris Tincher.

“All of us take turns sitting with him and eating with him,” said team leader Amy Chambliss. “We just enjoy his company.”

“He’s just so warm,” Executive Director Melissa Luebbert said. “Anytime you take his food to him, he’d ask how we were doing, and then it got to where we just formed a friendship.”

Owner Chris Tincher Explains why Ernie is so special to him and his team.

Luebbert is amazed at how much energy and stamina Ernie has.

“We were just fascinated because he’s always like ‘oh I just mowed my lawn,’” Executive Director Melissa Luebbert said. “And he push-mows!”

The Chick-fil-A team loves Ernie so much that they wanted to make sure he visits as often as possible. An employee named James Cooke came up with an idea.

“James came up with a really good idea as we were thinking of how to honor you,” Tincher said in the video posted to Facebook. “He said ‘what if when Ernie came in, he never had to pay for Chick-fil-A again, when he came to our restaurant?’ So that was James’ idea, he wanted to honor you. So we wanted to say every time you come into this restaurant, you’re family now. So you no longer have to pay for any of your meals.”

At first, Ernie refused the offer, his old school reluctance to get something for nothing kicking in.

“It was kinda of a shock to me,” Ernie said of the gesture. “I didn’t think I really deserved a free meal.”

But Tincher is also a veteran and Ernie’s friendship with the team is far more important than money.

“He really does make people feel special,” Tincher said. “He’s almost more important to our staff than we are to him.”

“I wouldn’t know what to do without him,” Luebbert said. “He is definitely a bright spot in our day.”

Ernie can eat whatever he wants from the menu, but he only wants the chicken nuggets. And the company of some bright young people who he calls friends.

Many Chick-fil-A locations honor all veterans and active servicemen by giving them free meals on Veteran’s Day.