Little Girl Thinks Bride Is Real-Life Princess. What She Does Next Will Melt Your Heart 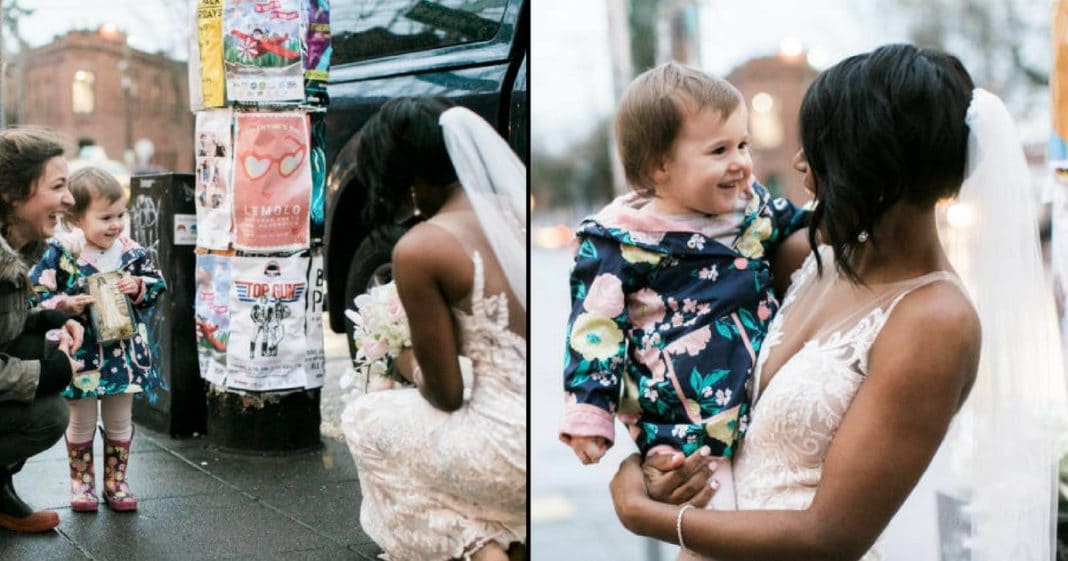 Many little girls dream of being a princess one day, or at least of meeting one. Childhood is full of fairy tales with beautiful princesses and the princes who come to sweep them off their feet.

We see princesses in Disney stories like Cinderella, Belle, Sleeping Beauty, and Snow White. We read about them in books like “The Princess and the Pea.” And we even see real-life princess stories like that of Prince William and Kate Middleton and dream that one day that might be us.

But while most of us will never actually become a princess or meet one in real life, this 2-year-old did (or, at least, someone she thought was a princess)!

Shandace and Scott Robertson had just gotten married in Seattle and were walking around the Ballard neighborhood taking pictures when a little girl spotted the beautiful bride.

It turns out that this little girl’s favorite book is “The Woman in White” by Wilkie Collins. While it’s not actually a children’s book, the cover features a woman in a long white gown whom the little girl has always thought was a princess, so she carries it around with her everywhere.

When she spotted Shandace in her long, white wedding gown, she thought it was the princess from her book come to life.

“She showed me the book and was like, ‘Look, there she is!’” her mom said.

They talked about how the bride was probably the “Princess of Ballard” and the little girl stared at Shandace in awe until she walked over and said hi.

The girl showed Shandance the book that featured “her” on the cover, and Shandance gave the adorable toddler a rose from her bouquet and then asked if they could take some pictures together.

“She was very sweet and wanted to take some pictures with [my daughter], so we did that,” the little girl’s mom said.

She added that she felt bad because her daughter was a little muddy, but Shandace didn’t seem to mind.

After they got home, the girl’s family printed some photos for her birthday, including one of her with the “Princess of Ballard.” Her mom says she still believes she saw a princess that day, and she’s always on the lookout for her when they are in the Ballard neighborhood.

“She’ll walk up to [the photo] and be like, ‘There’s the Princess of Ballard!’” her mom said. “And every time we go to Ballard, we expect to see the princess.”

While meeting Shandace was one of the highlights of this little girl’s life, it was incredibly special and meaningful to the couple as well.

“It was a really special moment,” Scott said later. “It was the cherry on top of the perfect day.”

Were you touched by the way this sweet bride went out of her way to make this little girl’s day? So share this!