A little girl from Philadelphia is now healthy three years after receiving a kiss from Pope Francis. To thank her doctors and the hospital for saving her life, the foundation started by her family is donating $50,000 to aid in child care and research.

Gianna Masciantonio was in hospice for the first six months of her life. She was diagnosed with an inoperable brain tumor. During Pope Francis Papal visit in 2015, a member of the Swiss guard hoisted the child up in their arms. She received a kiss from His Holiness.

The pope wasn’t aware of Masciantonio’s diagnosis of histiocytosis. This caused a dangerous tumor to grow on her brain stem.

Three years later and after several brain scans, the little girl is going to start pre-school this September with hardly any signs of the illness she experienced.

“She’s blown our expectations out of the water in terms of how she’s doing,” Dr. Amish Shah, a pediatric neuro-oncologist at Children’s Hospital of Philadelphia, told CBS Philly.

“She’s resilient, and she’s tough, and instead of taking all this as something to be fearful of,  she’s really taking this in stride.” 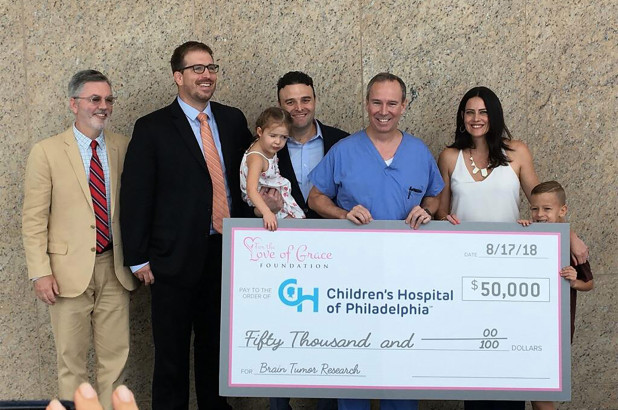 On August 17th, “For the Love of Grace,” the family’s foundation shared some excellent news: It was donating $50,000 to CHOP for pediatric brain tumor research.

Joey, the little girl’s father says the hospital is very special to them. No amount of money could repay their gratitude.

They are doing it for the children. “we just want to help the kids.”

“Seeing your kid run around and seeing her doing the things she’s doing with what they told us from the beginning is amazing,” Joey Masciantonio told the news outlet.

What a generous gift. One given with great thanks and appreciation. But as Joey said, there’s nothing they could offer that could express their thanks for having their baby girl healthy and free of tumors.