Little Boy Lonely When Dad Gets Deployed. What Neighbor Does For Him Melts Mom’s Heart 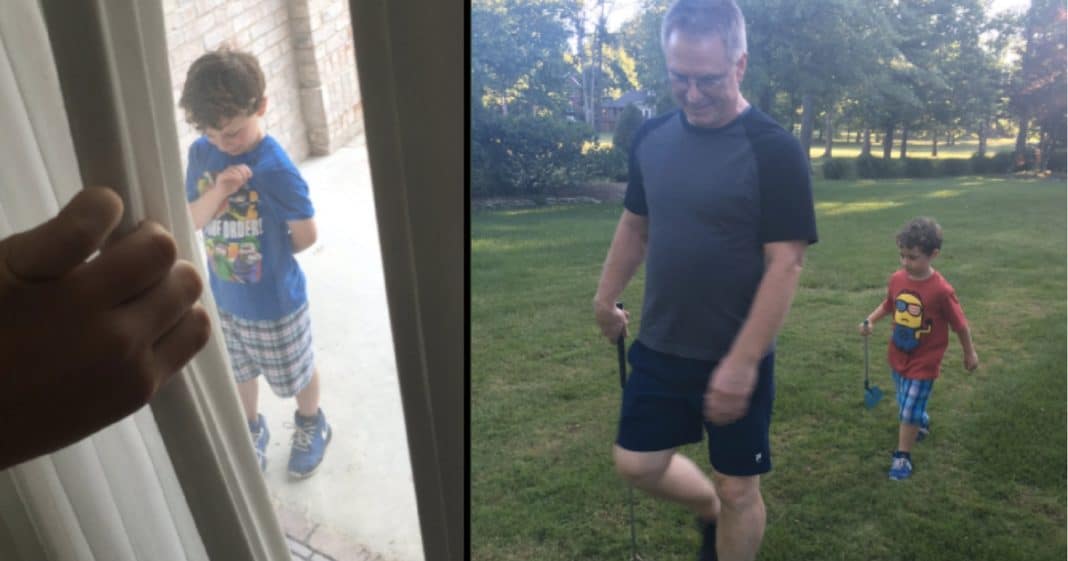 When a soldier is deployed it is hard on everyone. Of course it is difficult for the soldier, whose life is often put in danger as he or she follows their orders, but it is also really tough on the family they leave behind.

Deployments can be especially difficult for young kids who miss their moms and dads and don’t fully understand why they have to be away so long.

When 5-year-old Brian Kelly’s father, Dan, was deployed to Syria, the young boy had a hard time with it. The separation was especially difficult because the family has no communication with him while he is overseas.

While his dad is gone, though, Brian has someone else who is watching over him and being a good male role model – his neighbor, Dean Cravens.

Brian’s mom, Barbara Kelly, said Brian started developing a friendship with Dean when they first moved into the neighborhood in Belleville, Illinois, in July, “but it became very much more so since my husband left. He misses him so much.”

Brian loves to do yard work, so whenever he sees Dean outside working he asks if he can join in.

“When he sees me with my trimmers, he’d always come over and talk to me about it,” Dean said. “He’s a hard worker.”

As the friendship developed, Dean decided he could do more for the young boy than just put him to work. He decided that, while Brian’s dad is deployed, he will try to fill those shoes as best he can.

“When his dad left, he’d have more time on his hands, and he’d come over and ring the doorbell,” Dean recalled. “He’d ask if I could come out and play. Originally he’d ask to do more yardwork, and I thought, ‘Well, let’s do other things too,’ so we play catch, we’ll be shooting the ball, working on my golf swing.”

This is our little neighbor. His dad is deployed in Syria and everyday he comes to the door asking to work with our dad. Appreciate today? pic.twitter.com/RdAHwh2Thm

Dean, a father of three girls, loves the time he gets to spend with Brian.

“I appreciate it a lot,” he said. “I love kids and being with them. When I see they’re not having fun, I’m not.”

“I like to coach and teach them because you get to see them learn,” he added. “I don’t have a son. I have three daughters, and we’ve had a great time, but it’s fun to be around a boy. It’s different.”

Brian’s mom has been touched by Dean’s willingness to step in and show love and kindness to her son while his dad is gone. While she can’t talk to her husband about it, she’s sure he’ll be grateful when he learns how his neighbor has stepped in to be a role model and friend to Brian while he’s been deployed.

“Brian knows that no one is going to replace his father. The bond between a father and son, it’s just unbreakable,” Barbara said. “If that was me, I would be happy that my child is smiling and has someone to look up to and be there for them until I get back. When Dan gets back, Brian’s going to cry and run to him with open arms.”

Were you touched to see how Dean has befriended Brian while his dad is gone? So share this!