Kids Can’t Wait To Get Picture With Mickey, Then They Hold Up Sign That Has Them Bawling 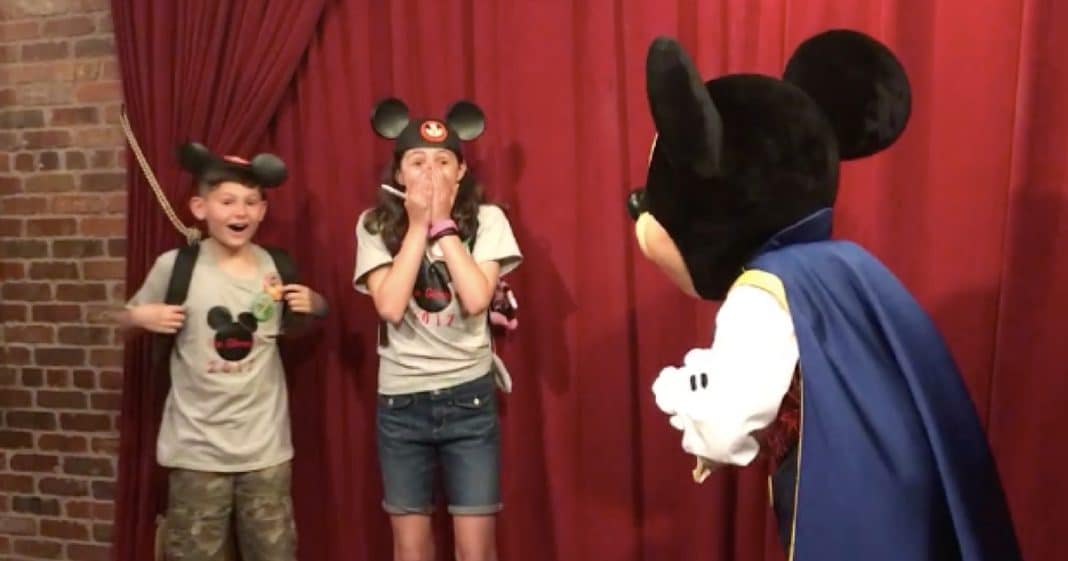 The Disneyland slogans “Where Dreams Come True” and “The Most Magical Place on Earth” couldn’t have rung truer for this family.

Thinking they were just going to have a routine meet-and-greet with Mickey Mouse, 12-year-old Janielle and 10-year-old Elijah had no idea that their lives were about to change forever.

As if a trip to Disney’s Magic Kingdom and the Star Wars Convention weren’t enough, Tom and Courtney Gilmour, foster parents to Janielle and Elijah, had something up their sleeves even more special and surprising for these kids.

The Gilmours had been wanting to adopt the children for a while, and now the final adoption papers had been approved. They were given an official adoption date of May 24th.

The couple decided to use the trip to Disney to officially reveal the big news to the kids, and their plan worked like clockwork!

The family lined up for the meet-and-greet time with Mickey, but unbeknownst to the children, Courtney had already asked Mickey to hold up a sign that revealed the kids were going to be adopted.

When the time for photos came, one of the cast members showed the children the sign. The emotional, beautiful moment that unfolded when reality hit Janielle and Elijah was captured in a tear-jerking video that has since gone viral.

Courtney joyfully recalled the moment: “This went better than we had hoped,” she said. “They were beyond shocked and we were beyond emotional…PURE DISNEY MAGIC!”

Janielle and Elijah have since been officially adopted by the Gilmours. They have become FAMILY, one of the most beautiful words in the human vocabulary. This is truly a happily ever after story that started in one magical place where dreams really do come true.

Were you as touched by Janielle and Elijah’s reactions to the big news as we were? So share this!