Kayakers Find Strange Sack Floating In River. Make Gut Wrenching Discovery When They Open It Up 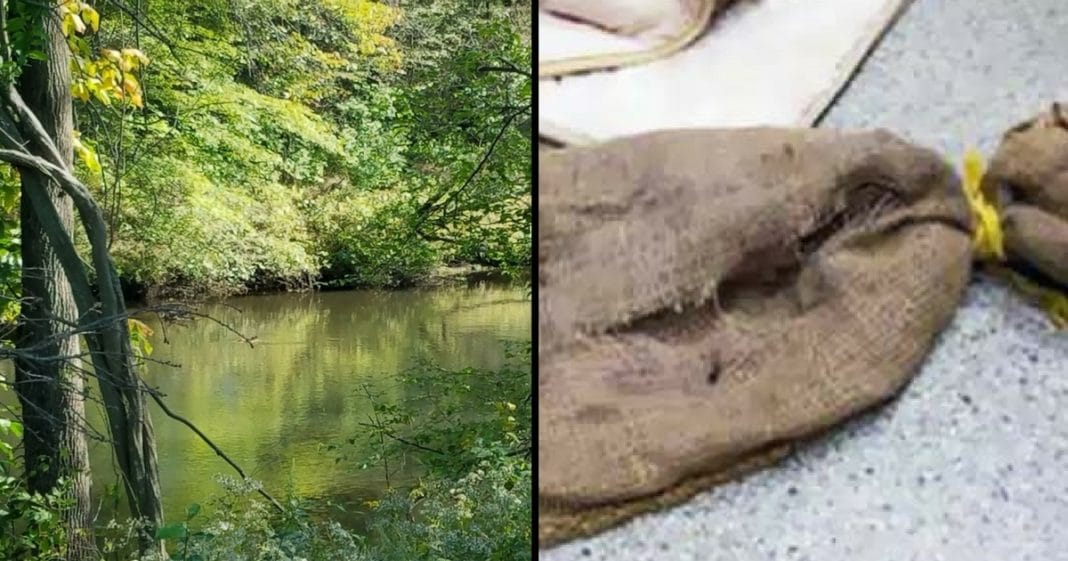 Though summer has turned to fall, the weather is fair in many locations where boaters can still take advantage of the lovely conditions and enjoy the water and waves and sunshine.

But while on a waterway in Uxbridge, Massachusetts, two kayakers came across something unexpected and shocking. With quick thinking and actions, they saved the lives of six furry pups.

Expecting to hear soon from Uxbridge Animal Control about the puppies found in a sack along the Blackstone River. pic.twitter.com/cb5wNiCVRb

As they were out on the water, the kayakers found a potato sack filled with puppies that someone had cruelly tossed into the river. The sack was not quite submerged at the river’s bank, but it was actively sinking, enough so that the runt of the litter, who was at the bottom of the sack, was quickly taking water and mud into its lungs. The little one would’ve died if the kayakers hadn’t pulled the bag from the water when they did.

The puppies, who are thought to be less than a week old, were rescued just in the nick of time and are expected to survive and make a full recovery. They will be ready for adoption in approximately two months’ time.

Uxbridge puppies are healthy after being dumped in Blackstone River. Adoptions in 8-9 weeks. pic.twitter.com/Qhm1TCtzLO

Police surmise the precious half-dozen lab-mix pups weren’t in the Blackstone River for long. The kayakers heard whimpering and jumped into action, calling the Uxbridge police after getting the puppies out of the river.

“I believe as a police chief they had guardian angels looking over them – these kayakers,” Uxbridge Police Chief Jeffrey Lourie said of the pups. “It was only a matter of time before they were all submerged and perished.”

On Facebook, Lourie vowed his department would find and charge the lowlife who committed such a horrible act against these precious, defenseless puppies.

“Obviously this is a heinous act, unconscionable,” Lourie said. “We want to be able to  charge [the suspect] with six counts of cruelty to animals.”

Lourie’s department is going through surveillance video and will release any pertinent footage where they believe the public’s assistance will be helpful.

Let’s hope justice will prevail in this case. No one should get away with trying to murder innocent puppies.

Do you agree these kayakers are heroes for saving these pups? So share this!