Katy Perry Surprises Orlando Shooting Victim, Then Does Something That Leaves Him In Tears 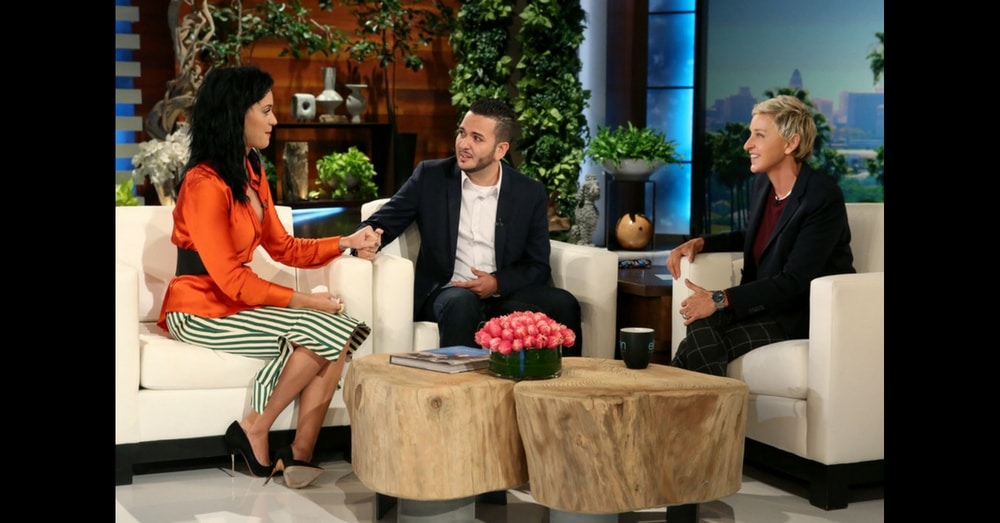 When Tony Marrero agreed to go to Pulse nightclub with his best friend and co-worker, Luis Vielma, he had no idea that decision would change his life forever. A man came in and began shooting, killing 49 people, including Luis.

Doctors told the heartbroken Tony that it was a miracle he survived. He was shot four times in the back and once in the arm, but somehow none of the bullets hit his spinal cord or any vital organs.

Tony’s recovery has been long and difficult – his wounds are not only physical, but emotional and psychological as well – but there was one thing that helped him as he healed.

During a recent appearance on The Ellen DeGeneres Show, Tony told Ellen that he was greatly impacted by the lyrics to Katy Perry’s song “Rise,” some of which read,

I won’t just survive
Oh, you will see me thrive
Can’t write my story
I’m beyond the archetype…

Oh, ye of so little faith
Don’t doubt it, don’t doubt it
Victory is in my veins
I know it, I know it
And I will not negotiate
I’ll fight it, I’ll fight it
I will transform

When, when the fire’s at my feet again
And the vultures all start circling
They’re whispering, “You’re out of time,”
But still I rise

This is no mistake, no accident
When you think the final nail is in
Think again
Don’t be surprised
I will still rise

Little did Tony know that Katy was waiting in the wings to meet him! As much as he was impacted by her lyrics, she was inspired by his resilience in the face of hardship, and when she heard his story she knew she had to meet him.

As she walked out to meet Tony, both of them in tears, she told him, “I don’t know how I’m going to get through this. Your story is so inspirational.”

The two were able to talk for a little bit, and Tony thanked her for writing a song that gave him so much hope and strength.

“I just want to say thank you for everything you do,” he told her. “Your lyrics to that song helped me from the day that I was in the hospital all the way to now. You’re amazing.”

But the surprises weren’t over! Katy told Tony that she had heard he was creative and had dreams to go to film school. “So I personally want to pay for your first year at film school,” she told him, leaving him speechless.

In addition, Ellen gave Tony a private screening of Finding Dory and, via Shutterfly, donated $25,000 to the foundation benefiting the Pulse shooting victims.

Were you touched by what Katy Perry and Ellen DeGeneres did for this shooting victim? So share this!