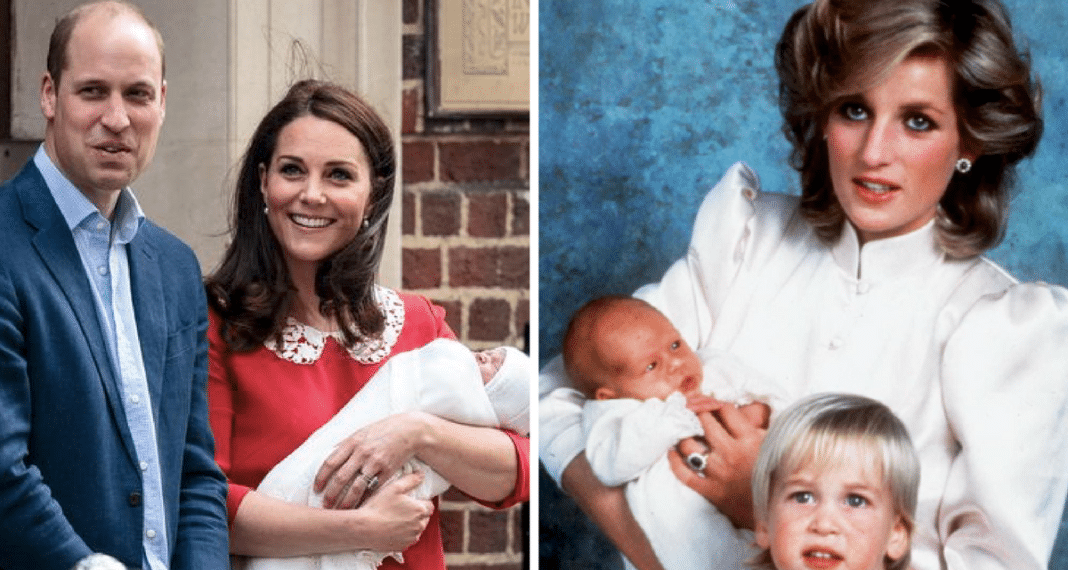 On the morning of Monday, April 23rd, 2018, Catherine, The Duchess of Cambridge left her home at Kensington Palace. She traveled the short distance by car to the Lindo Wing at St. Mary’s Hospital. She was in the early stages of labor.

Shortly before noon, local time, she gave birth to her third child with Prince William; it’s a boy! The little prince’s name hasn’t been divulged yet, but the odds are it could be Philip, Arthur, Alexander, or James.

As is customary with royal births, the Queen was notified first before other members of the family. Following tradition, along with posting notice of the birth on social media by Kensington Palace, an easel was placed outside Buckingham Palace; a town crier was heard declaring the joyous news outside the hospital where the press and royal fans waited.

A notice has been placed on the forecourt of Buckingham Palace following the announcement of the birth of The Duke and Duchess of Cambridge's third child.@KensingtonRoyal pic.twitter.com/82ZCB7F2aQ

In the afternoon, Prince William left his wife and new son to fetch his older brother and sister, Prince George and Princess Charlotte. The two siblings weren’t inside the hospital for just half an hour before their father ushered them away. They wowed the crowds by waving to them and being effortlessly cute and adorable. Princess Charlotte loves the spotlight clearly. Prince George, not so much.

The press outside the Lindo Wing tried to get Prince William to prematurely reveal the baby’s name. All he said was, “You’ll find out soon enough.”

Unlike most mothers who can relax in privacy, without crowds clamoring to get a glimpse of them with their new infants, Kate doesn’t have that luxury. Most new moms can dress in sweats and comfortable shoes and leave the hospital going unnoticed; Kate can’t.

She wears heels! Not twelve hours after giving birth, that’s an incredible and daring feat if you ask me. Especially carrying your new baby in your arms.

Welcome to the family. pic.twitter.com/nKSd5kh5bZ

Most mothers would cringe and shy away from having their hair coifed and styled, and makeup applied. Not to mention cramming their feet in shoes that will pinch their feet. And as for donning a bespoke dress? No thank you.

Most new mothers perhaps don’t feel physically at their best after accomplishing the miracle of bringing new life into the world. Their bodies haven’t had the chance to slim down. No matter; Kate looked fantastic in her red Jenny Packham dress with its lace collar. Her darling boy was swaddled in a matching red blanket in her arms.

Since her engagement to Prince William in 2010, everything Kate wears is carefully considered. From her footwear to jewelry. Accessories and handbags, much thought is given to what she wears. The occasion, time of day, and weather are just a few factors taken into consideration. Kate must be prepared to be photographed at all times.

When Kate stepped out in this red dress, many recall a similar frock worn by Prince William’s mother, Diana, Princess of Wales. The late princess wore this dress while cradling her son outside the Lindo Wing on a joyous day just like this one.

What an apt and fitting way to continue Diana’s legacy. It’s a nod of respect to the woman who loved her children beyond anything else. Well done, mom! Now see that you and your little man get plenty of rest.

Duchess Kate's dress reminds us of what Princess Diana wore when she left the Lindo Wing with Prince Harry in 1984. #royalbaby pic.twitter.com/iGE3io6ZpI