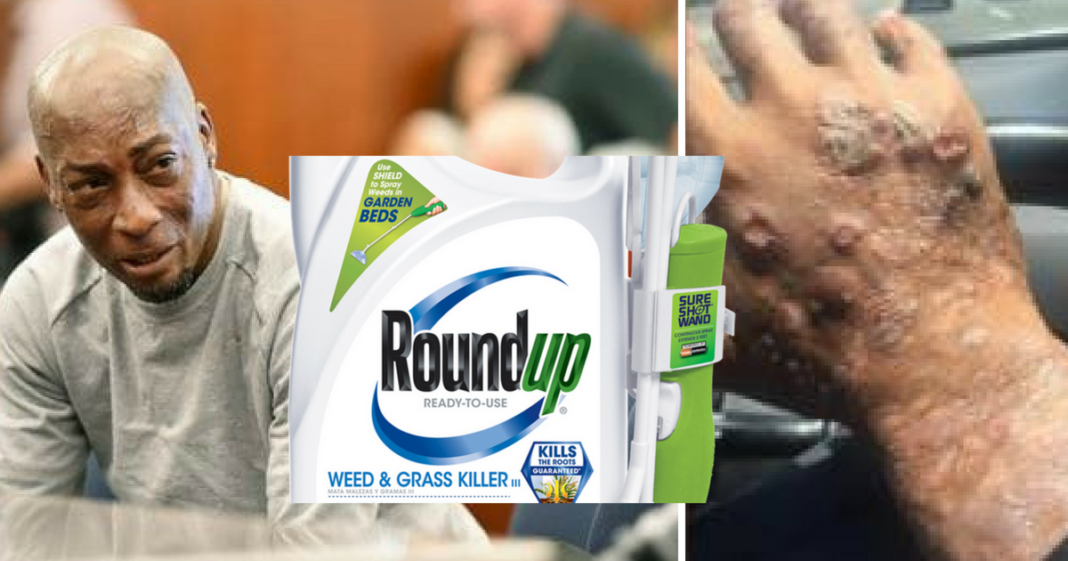 The most widely used herbicide in the world, Monsanto’s Roundup, was found by a jury to have likely contributed to cancer that caused lesions over 80% of the body of a 46-year old groundskeeper, Dewayne Johnson.

#Monsantotrial verdict has been reached in Dewayne “Lee” Johnson vs Monsanto Roundup cancer trial. Stay tuned as we await the reading of the verdict pic.twitter.com/xmxyLpzTgZ

The jurors awarded him $289 million in damages when he developed non-Hodgkin’s lymphoma two years after accidents that soaked his face and body with Roundup.

He used the chemical frequently as part of his job at a school district near San Francisco and tried to take care to keep it off his skin.

“I figured if it could kill weeds, it could kill me,” Johnson said. “I took it seriously. That’s why I wore anything I could to protect myself.”

Today, his condition has deteriorated to what he is “too crippled to speak,” but he was visibly overcome with emotion to have survived long enough to win his case in court.

Johnsons’ court date was expedited since he is dying, and he was the first of a long list of patients suing Monsanto with similar claims that Roundup gave them cancer.

“We will appeal this decision and continue to vigorously defend this product, which has a 40-year history of safe use and continues to be a vital, effective and safe tool for farmers and others,” Monsanto Vice President Scott Partridge said.

In actuality, it is nearly impossible to determine if the chemical was the reason that Johson developed cancer. However, Johnson only had to prove that it was a “substantial contributing factor” to the jury.

Monsanto attorney, George Lombardi, argued that Johnson’s cancer may have started before he began working at the school district. He has vehemently refuted claims that there is a link between Roundup and cancer.

The American Cancer Society maintains that the cause for the majority of lymphoma cases are as of yet unknown.

Meanwhile, the Environmental Protection Agency says that Roundup “is safe for people when used in accordance with label directions.”

The EPA has based some of its opinion, which have influenced regulations on glyphosate, on research provided by Monsanto.

“You can’t take a lung cancer tumor and run a test that proves that tobacco caused that cancer. … You’re seeing the same thing here,” Litzenburg said. “I think we’re in the beginning of that era of this dawning on us as a country — as a public — the connection between these two things.”

There are 4,000 similar cases awaiting trial in various state courts and 400 cases have been filed in federal multidistrict litigation or MDL.

There are no dates for the MDL trials, and the outcome may take longer for terminal patients who may not live to see their own day in court.

See more in the video from AFP news agency below: