Judges Voted Her Off, But What She Did Immediately After Had Whole Room On Their Feet 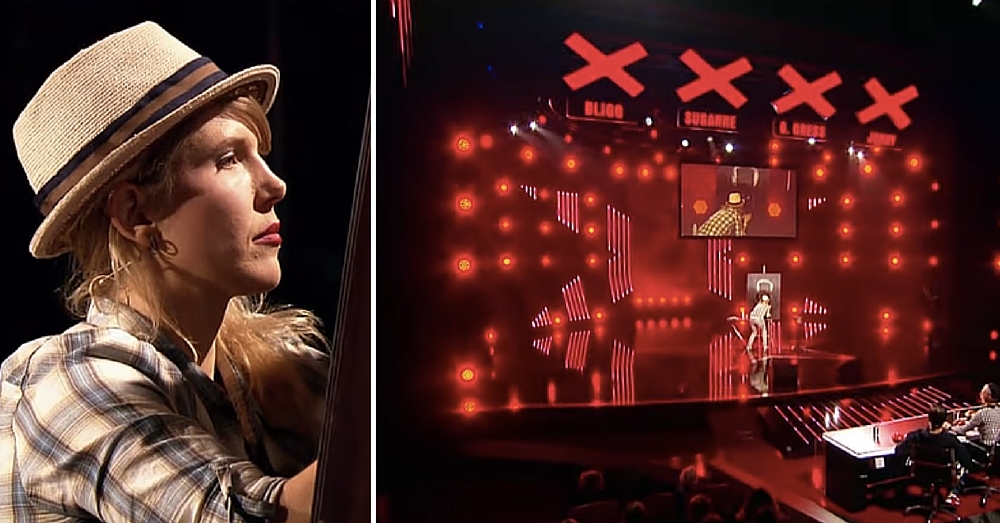 With the popularity of America’s Got Talent and Britain’s Got Talent, other countries have stared showcasing their talent as well. Recently, on Switzerland’s Got Talent, one artist who took to the stage caused all of the judges to rethink the way they judge contestants.

Swiss artist Corinne Sutter draws portraits in caricature, and she started out drawing what looked like a simple portrait of judge Gilbert Gress. As she drew, though, the judges grew a little bored and weren’t impressed with her skill. One by one they hit their red buttons, denying Sutter a chance to pass to the next round.

However, even after being buzzed by all four of the judges, Sutter kept going. When she finished her drawing, she flipped it upside-down and blew some powder on it. Lo and behold, when the powder cleared, an incredible portrait of one of the other judges, Bligg Zusammen, appeared!

Instantly the crowd was on their feet, applauding the talented woman who didn’t give up, even when everything was against her.

Then it was time for the judges to eat crow. Judge Jonny Fischer admitted that “We’re looking pretty stupid now,” and Gress told her, “We owe you an apology for buzzing so prematurely.”

Each of the judges took turns telling her why they hadn’t been impressed at first, but then complemented her obvious talent and her determination. Bligg told her she was “an artist who’s taken us by surprise,” and in the end three out of the four judges changed their votes and pushed her through to the next round.

Sutter’s story holds a couple of lessons for us. One is that we shouldn’t be too quick to judge another person, and the other is that we should press on and keep going, even in the face of adversity. Even if you feel like you’ve failed, prove everyone wrong by finishing what you’ve started!

Were you inspired by Corinne Sutter’s artistry and determination? So share this!