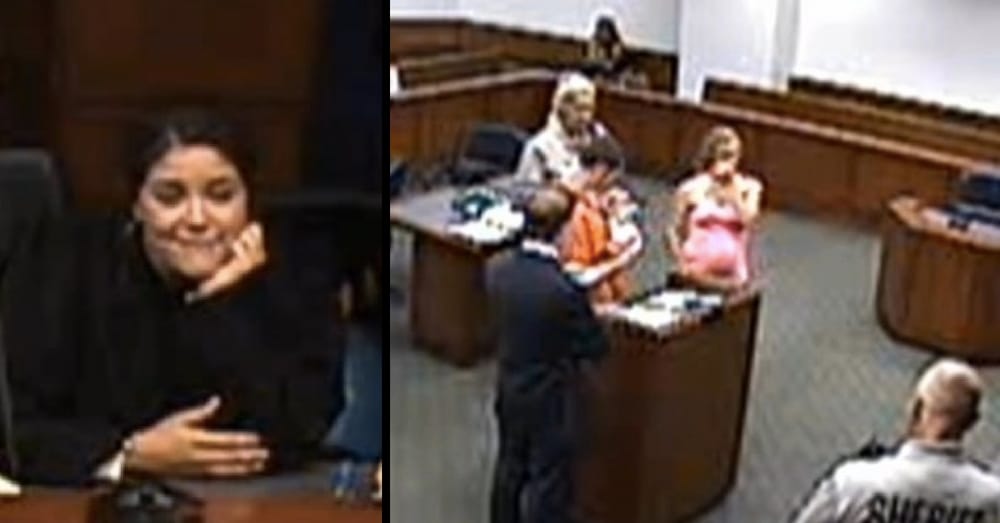 There are several reasons our judicial systems are in place, one of which is to make sure justice is served to those who have committed a crime. Most of us would agree that we want justice to be dealt fairly, but sometimes there are cases where there is room to deviate just a bit for the right reasons.

Such was the case when Judge Amber Wolf of Louisville, Kentucky, was holding hearings for James Roeder and his wife, Ashley. The two of them were facing burglary charges in the same case and, since they were co-defendants, had been ordered not to have any contact with each other.

But as Judge Wolf was finishing James’ hearing and getting ready to start Ashley’s, she decided to do something that left both of the defendants stunned.

The couple had a one-month-old son together, but James had yet to meet him. When James came out for his case, Wolf noticed Ashley trying to hold the baby up so James could see him.

“It occurred to me after we finished this case that he had not met his baby — who was 30 days old — and that he was not going to get an opportunity to meet his baby anytime in the near future,” Wolf said.

That’s when she decided to violate her own no-contact order.

As James stood before her at the podium she told him, “I don’t want you to say anything about your case at all. Don’t say anything. Your lawyer is not present right now. But I understand that there is a chance that you’re going to go back to Todd County, and your baby is a month old, and you haven’t met that baby yet. Is that right?”

“Mrs. Roeder, do you want to come up here?” Judge Wolf then asked.

Ashley came up to the podium and handed James’ son over to him. Though the moment was brief and bittersweet – who knows when James will be able to hold his son again – it was one that may make all the difference as James moves forward toward rehabilitation.

Though Judge Wolf’s act may not have been the most “just” or “fair,” it was an act of humanity and compassion that meant the world to James and Ashley.

Speaking of the moment later Wolf said, “It wasn’t really a judge thing. I think it was just more of a human thing.”

Were you touched by this judge’s act of compassion toward this couple? So share this!