John McCain’s 106-Year-Old Mom Grieving The Loss Of Her Son: It’s ‘Tough’ To ‘Bury Your Child’ 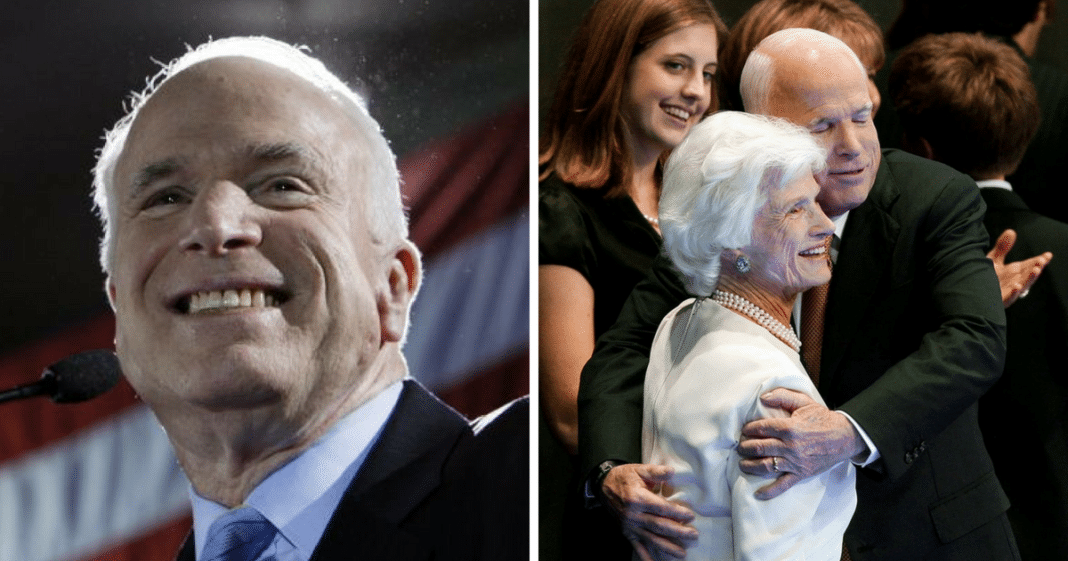 The country is honoring and mourning decorated war veteran, POW survivor and U.S. senator, John McCain after the 81-year-old succumbed to brain cancer on Saturday. He discontinued medical treatment the previous day. McCain was diagnosed with glioblastoma in July 2017. This is the most severe and aggressive form of brain cancer.

Sen. McCain impacted the lives of thousands. None more so than Roberta McCain, his 106-year-old mother. A close family friend of the McCain’s told PEOPLE that Roberta is “incredibly proud” of her middle child.”

“Roberta was his biggest supporter and the leader of his fan club. She was incredibly proud of him,” the source says. “His mommy loved him. He knew that.”

The source points out the centenarian’s age. She “is a very strong woman.”

“She is all there, mentally, and is still going strong at 106,” the friend tells PEOPLE. “She outlived her 81-year-old son. That tells you a lot. But it’s a tough blow to bury your child .”

The source also said that Roberta didn’t travel to Arizona, but she and her son did speak over the phone. She was aware that he was ceasing medical treatment.

“I can only imagine what she’s going through,” the friend says of Roberta through tears.

Sen. McCain and his first wife Carol still speak and are still close. They divorced in 1980 after a 15-year marriage where they had three children: sons Douglas, Andy, and daughter Sidney.

The insider exclusively told PEOPLE: “Roberta is 106, but she’s spunky. She knows he is ill.”

In 2008, the proud mother, at the age of 96 spoke to McCain supporters: “Johnny is going to be the president of the United States, and he’s going to keep the traditions … and the standards high,” she told the crowd, receiving applause.

“All we want is a world where we can raise our children, have a chance at prosperity and happiness, and we can vote any way we want to,” she continued before ending on a sweet note. “I can’t thank you enough … I wish I could kiss each one of you on the cheek. If I get a chance, I will.”

I love you forever – my beloved father @senjohnmccain

PEOPLE recalled the time the publication spent on McCain’s campaign bus during 2007 when Roberta was 95. There’s a cute story she shared with the magazine after her son’s urging..

“Roberta teased her son, “I want to correct you when you start telling all those big lies.”

“When the conversation turned to the “Straight Talk Express” campaign bus itself — “This is wonderful! Can you imagine me comfortable on a bus?” Roberta said — Sen. McCain asked his mother to regale the group with a story about a driving mishap in Arizona.

“When her granddaughter  Meghan McCain, then 23, praised her for the tale, Roberta responded, “Honey, I shoot my mouth off like a neophyte!”

“Roberta spoke earnestly about her son, too, during the interview. “I think civilization depends on this election,” she told PEOPLE. “Johnny should have been dead ten times already. Not just when he was a POW in Vietnam. He had so many near-misses [as a naval aviator]. He was saved for some reason.”

McCain’s second wife, Cindy, 64, posted this emotional tweet after his death. “My heart is broken. I am so lucky to have lived the adventure of loving this incredible man for 38 years. He passed the way he lived, on  his own terms,  surrounded by the people he loved, in the place he loved best.”

“In the thirty-three years we shared together, he raised me, taught me,  corrected me, comforted me, encouraged me, and supported me in all things,” his daughter, Meghan wrote.

Senator John McCain, thanks for being a hero your entire life.

She added, “He taught me how to live. His love and his care, ever-present, always unfailing,  took me from a girl to a woman — and he showed me what it is to be a man.”

Sen. McCain will be honored this week by both political adversaries and friends alike. Per his wishes, he will be buried in Maryland at the Naval academy.