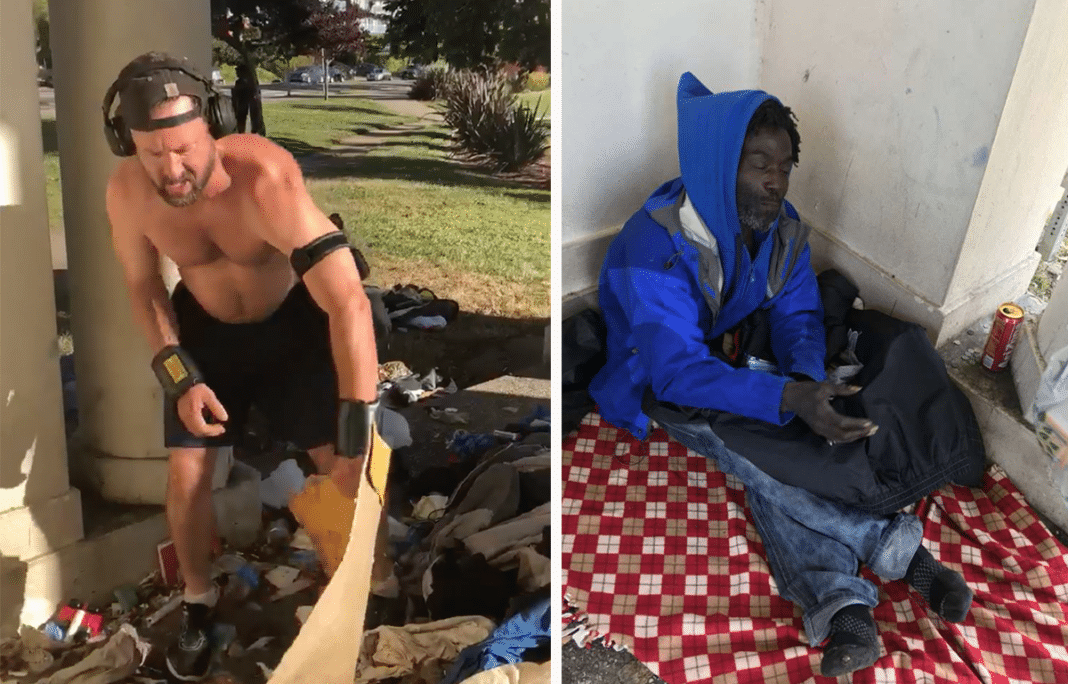 Oakland, California has been the scene of two viral videos of citizens “policing” the area of Lake Merritt in two months. This time, a jogger decided to throw a homeless man’s belongings into the lake for no apparent reason, drawing national media attention and a swift response in the community.

Rather than look for ways to help the homeless people in the area, the shirtless and bearded jogger took it upon himself to make matters worse, despite objections from onlookers with cameras.

After gathering together items and pitching them in Lake Merritt, he justified what he was doing by saying it was an accident and that the homeless person could retrieve his things from the lake.

“That’s our beautiful lake with stuff in it now.”

Another bystander knew the person whose items had been thrown in the lake. The man was named Jarew or “Drew” and he had lived in the area for years. It isn’t clear where he was at the time of the incident.

Due to the very high costs of living, almost 3,000 people are homeless in the Bay area, among them around 300 children. 68% of the homeless in Oakland are black, many are disabled, and some are elderly and/or veterans who are struggling to survive every day.

Even people with full-time employment have found themselves living on the street, unable to make a “living wage.”

One onlooker noted that the incident summarized many of the problems facing the area:

“This whole incident is a pretty succinct manifestation of so many of Oakland’s current issues—racism, gentrification, white privilege, male privilege, hatred towards poor and homeless people, lack of resources due to funds not being allocated properly, lack of consequences for unjustifiably bullying of homeless people, and sheer apathy towards their predicaments.”

To the jogger, the belongings were merely ugly “trash,” but to the homeless, it’s all they have. Legally, the items are considered no more than “debris.”

The man who filmed the incident, John Harris, talked to police and found out the unidentified jogger could be fined with littering, but would likely not be charged with anything else.

After the video went viral to more than 260,000 people on Facebook, citizens in the community came together to help buy Jarew new items like blankets, clothing, bedding, and perhaps a tent.

One of the men who filmed the incident reported they were looking for a more permanent housing solution as well.

“You know, the community is really stepping up to help this guy out….It’s kind of reviving my hope in the goodness of the people in my community,” said Kenzie Smith.

UPDATE: We have started at GoFundMe to support Drew and get him into a more permanent housing situation. Any help is appreciated!https://www.gofundme.com/j98zu-help-drewI am still stunned that yesterday I captured this video of some guy throwing a homeless man’s belongings into Lake Merritt and around the area. The police showed up soon after as the guy ran away to continue his workout. They said they couldn’t do anything because the homeless man’s possessions are considered “debri”. Only possibility is he “may” get a fine for littering. This is ridiculous that these are the kind of people who are living in Oakland now. Please share. This bro needs to go down.#JOGGERJOE #lakemerritt #oakland #homeless #bbqbecky #joggerjohn

Another viral video in Oakland last month involved a woman named Jennifer Schulte who called the police on two black men for using charcoal on their grill. The story became famous nationwide. She was referred to as “BBQ Becky” and was even featured in a Saturday Night Live sketch, as people were so shocked by her behavior.

Now, one of the men who she called the police on has helped create a GoFundMe page for Drew so that he can get back on his feet. It has raised over 6K thousand to date, well above the 3K initial goal. 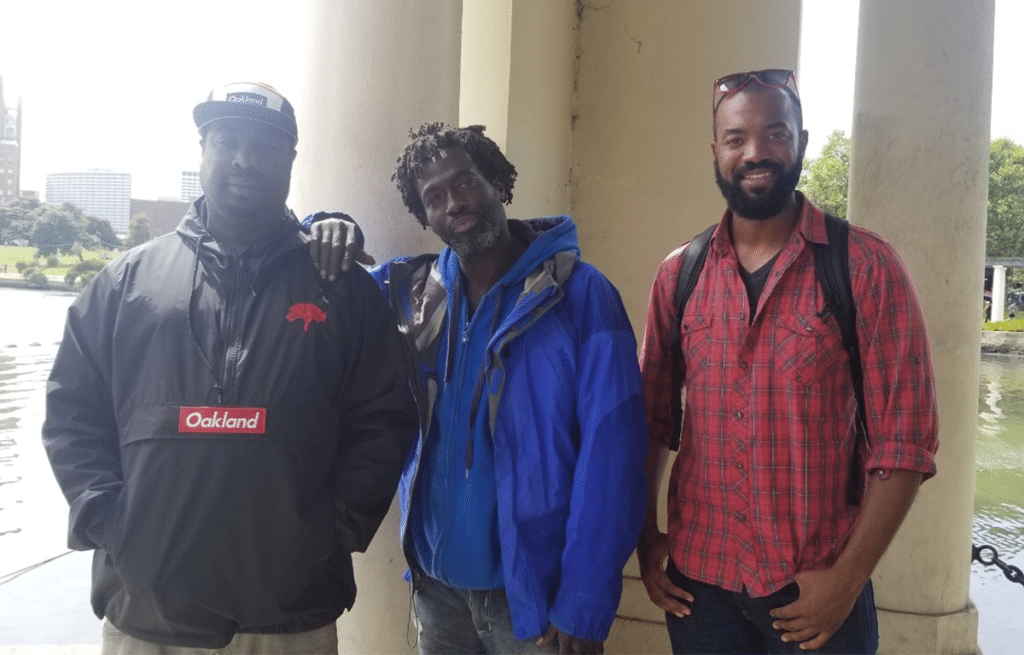 Kenzie Mouton (left) stands with Drew (in the middle) via GoFundMe

When Drew found out about the donations, he smiled and said:

“We just have such good community support.”

Following the incident involving Jennifer Schulte, the community organized a gigantic cookout by the lake humorously called BBQing While Black.

See more in the video from the Daily Mail below:

This man dismantled a homeless man's encampment and threw his belongings in a lake.

This man dismantled a homeless man's encampment and threw his belongings in a lake.