Instead Of Throwing Out Leftovers, Restaurant Is Giving Homeless Free Meal Every Single Day 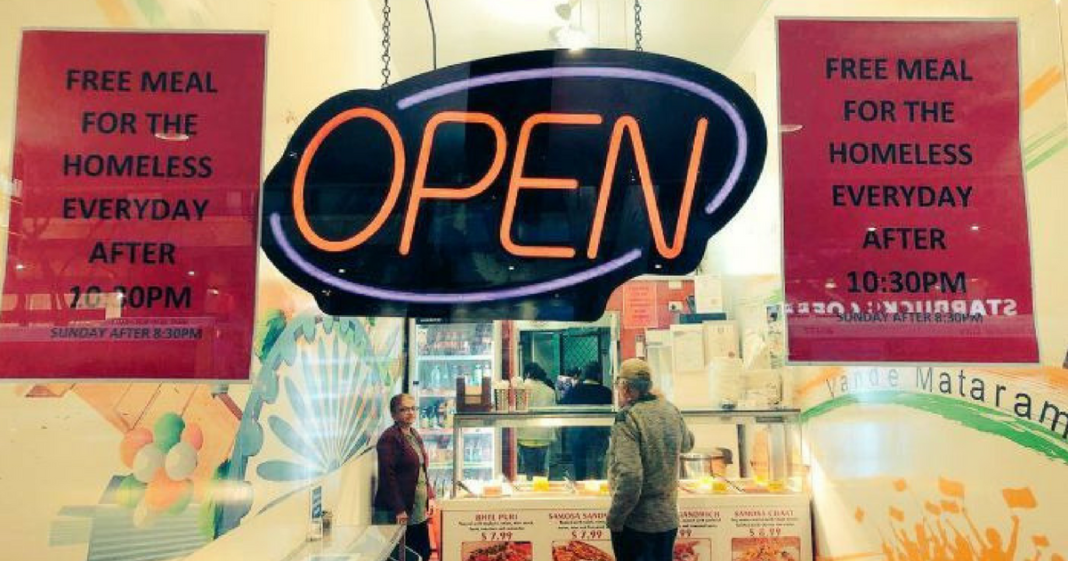 Every day, we waste food. We could feed others if we donated those cans of soup sitting in our pantry. Or those boxes of rice or instant potatoes or preserves or jams we know it will take us months to get to before they’re used. Buying in bulk is great if you have many mouths to feed. Why do so if the food could go bad or uneaten?

Hundreds of thousands of pounds of food are thrown away when millions live with empty bellies. They not only wonder where their next meal will come from; but when they’ll next have a chance to eat. The homeless, in particular, struggle to find shelter but food too.

Whether hot or cold, near spoiled or fresh, those who are so hungry will eat whatever they can find. Ashish Sood, of Brisbane, Australia knows what it’s like to live as he calls “rough.” When he emigrated to Australia over ten years ago, he went through some hard times. He spent time on the streets, His student visa and passion for everything culinary kept him going.

For two weeks, he struggled to feed himself. Sood always dreamed of having his own restaurant. His wish is now a reality. While he fought to survive for just that short time, Sood vowed to help others facing similar challenges.

His Ginger and Garlic restaurant has gained fame in Brisbane for feeding the homeless. The kind-hearted 33-year-old restauranteur opens his doors to the homeless 365 days a year. there’s a sign in the front window that reads, “Free meal for the homeless everyday after 10:30 p.m. Sunday after 8:30 p.m.”

“We’ve got so many people homeless, I have eight to nine people I see regularly,” Sood told ABC. “I want more, if there are more homeless people I’m happy to feed them, all of them.”

Sood’s customers love what he’s doing and continue to support his efforts.

Providing nourishing meals for the homeless does Sood’s heart good. It also helps him forge relationships with members of his community.

One of these is with Sara Harrup, CEO of the 3rd Space drop-in centre in Brisbane. She’s fully supportive of Sood’s efforts. “People assume they’re all drug addicts or criminals or that somehow they deserve it,”Harrup shared with ABC.

“So they’re very socially isolated and excluded,” she continued. “Having even the smallest gesture,  having a conversation with them, it’s a wonderful thing.”

ABC posted a video showcasing Sood’s good deeds. The comments are filled with people asking for Ginger and Garlic’s address so they can aid Sood in caring for Brisbane’s homeless.

We need more people like Ashish in Brisbane ❤️He owns a restaurant, and at the end of every night he gives away free food to the homeless.He knows how much it means to them … he was once homeless himself.

I love Sood’s outlook. Instead of whining and complaining about the plight of those on the street, he took action, ensuring these folks have at least one good meal a day.