Identical Twins Separated At Birth, But Watch What Happens When They’re Reunited For 1st Time… 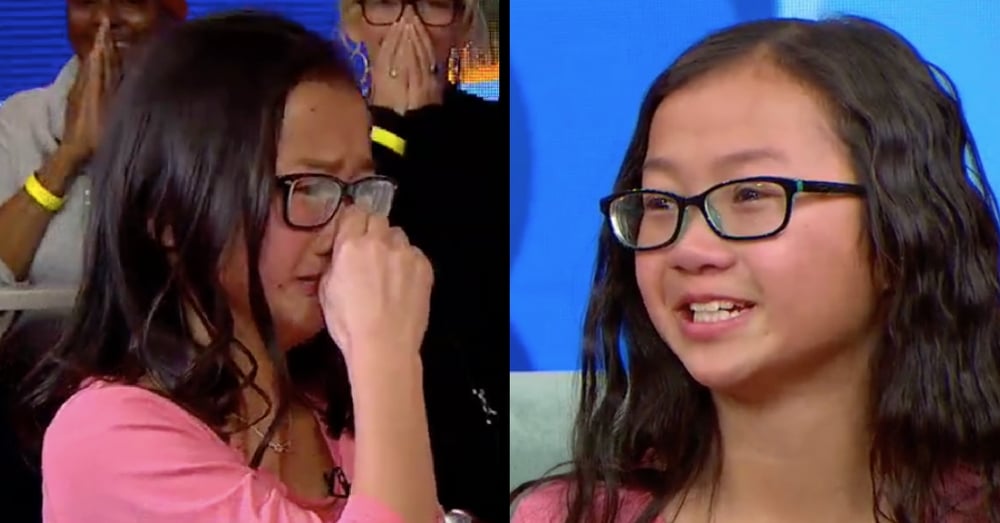 Growing up, 10-year-old Audrey Doering always felt like there was something missing, but she couldn’t put her finger on what that was. She asked her parents for a sister for Christmas, and that’s when her mom told her something that completely changed her life.

Audrey had been adopted from China as an infant, but her parents never knew much about her life before they brought her home.

While searching for the perfect Christmas present, Audrey’s mom, Jennifer Doering, started to get curious about her daughter’s past. She enlisted the help of a Chinese researcher to uncover any information she could, and that’s when she found a photo of her daughter sitting on the knee of her Chinese foster mom right next to an identical-looking baby.

“As soon as I had that picture, I was desperate to find out…who that other child was,” Jennifer said.

As she researched further she discovered that the other baby was Audrey’s twin, who had also been adopted to the U.S.

“Oh, it was unbelievable,” Jennifer recalled. “I’m like, ‘How?’ I mean, this is stuff you read about. And how, how could it really be that there are two of them?”

With the help of Facebook, Jennifer was able to track down Nicole Rainsberry, the mother of Audrey’s twin, Gracie.

“I mean, it’s hard to process that information,” Nicole said. “It was so crazy to be looking at what looked like Gracie, but knowing that it wasn’t Gracie.”

On Wednesday, Gracie and Audrey were reunited for the first time on “Good Morning America,” and the reunion was an emotional one, to say the least.

“How are you two feeling right now? Your first impressions of seeing your sister,” host Michael Strahan asked the girls.

Audrey said that when her parents first told her the news she thought they were playing a joke on her, but when she video chatted with her sister for the first time she knew it was all true. Her first reaction when she saw Gracie was, “She’s me.”

The twins discovered that they have a lot of things in common, like their favorite foods – chicken Alfredo and mac ‘n’ cheese.

They also both suffered from heart conditions. Gracie had two heart surgeries after coming to the States and Audrey had one.

Even though they were separated for almost 10 years, Gracie and Audrey know they will have each other for the rest of their lives.

“We have more family!” Nicole said when the two families met. “Instant family.”

When asked how it felt to now have her sister, Audrey summed it up perfectly:

Watch their emotional reunion for yourself by clicking below:

Were you touched by this sweet reunion as much as we were? So share this!