Husband Pays To Have Wife Killed. Jaw Drops When She Walks Into Own Funeral 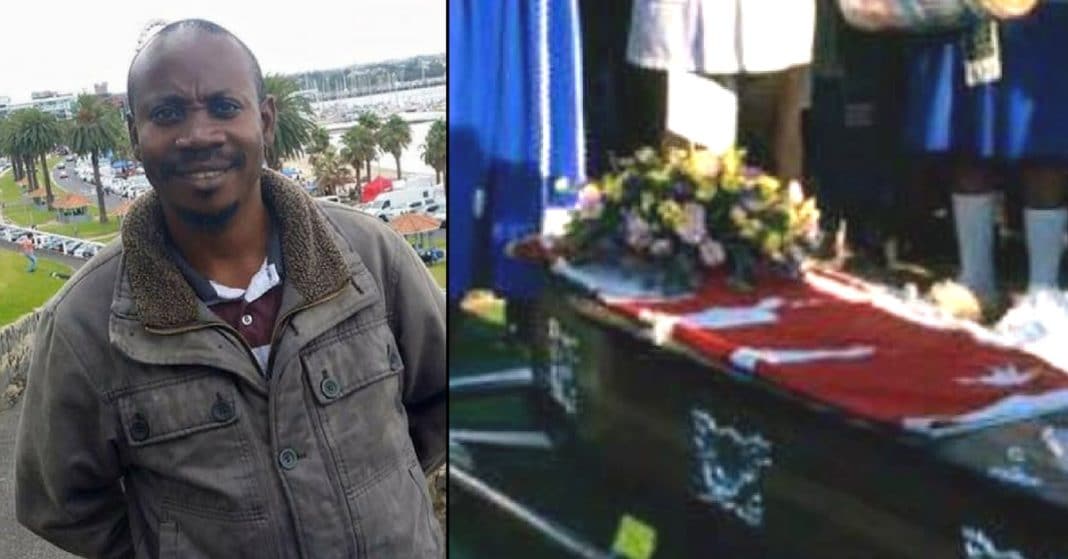 Like most criminals, Balenga Kalala, a refugee from the African Congo, believed he’d get away with murder.

Kalala moved to Australia and met Noela Rukundo, a woman also from the Congo. They married in 2004 and had eight children.

When Rukundo returned to Africa to attend the funeral of a family member, Kalala called her and suggested she go outdoors for some fresh air. As she took her husband’s advice, a stranger approached and pointed a gun at her.

“Don’t scream,” he told her. “If you start screaming, I will shoot you. They’re going to catch me, but you? You will already be dead.”

He then blindfolded her, forced her into a car, and drove off to an undisclosed location where several other men waited. They tied Rukundo to a chair.

As they held her, one of her captors demanded to know what she had done to this man who wanted her dead. Rukundo was terrified and puzzled – she didn’t have any idea who would hate her so much to have her killed.

Another member of the group called the man who ordered the hit. Her captors put the person on speakerphone. One asked what he wanted to be done with Rukundo.

To her shock and utter horror, Rukundo recognized the voice. It belonged to her husband.

Rukundo thought her life was over. Apparently, though, these men-for-hire have some scruples – they don’t kill women or children. (Or perhaps they just don’t kill someone who has done nothing to deserve to die.)

The men took Kalala’s money and lied to him, telling him Rukundo was dead. In fact, they released her and she returned to Australia just in time for her memorial.

As the funeral drew to a close and the mourners were leaving, Rukundo marched over to her husband and said just four words: “Surprise! I’m still alive!”

No, Kalala, you’re eyes aren’t deceiving you. Your wife has, though.

With the help of her would-be murderers, Rukundo arrived at the funeral with all the evidence authorities would need to lock Kalala up for quite a long time. He is now serving a nine-year sentence for plotting the murder of his wife.

Rukundo was devastated by Kalala’s actions, but she got the last laugh. With the assistance of her captors, Kalala won’t be able to cause much harm from his prison cell.

“I will stand up like a strong woman,” she said. “My situation, my past life? That is gone. I’m starting a new life now.”

Were you shocked by this real-life crime story? So share this!