How Cute Are the Cadbury Bunny Finalists for This Year? 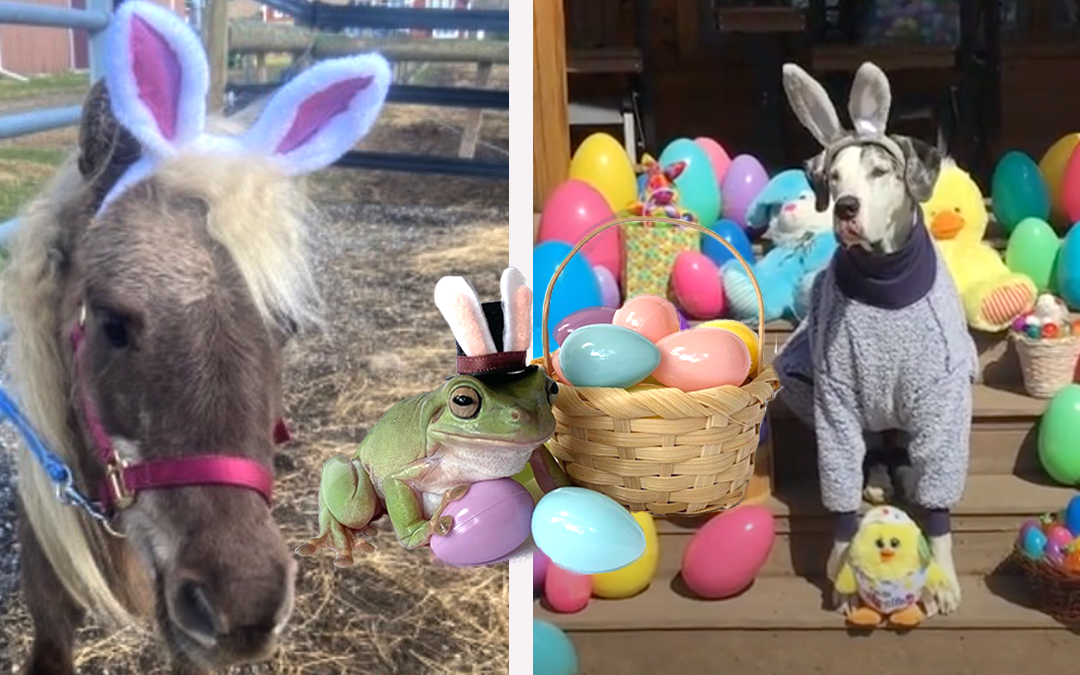 Spring is here, and for the third year in a row, Cadbury Bunny tryouts have picked a new mascot. This year, there were a record number of over 12,000 entries to become the 2021 spokes-animal for the Easter season.

Then, the winner receives a $5,000 prize and appears in the familiar Cadbury Clucking Bunny commercial.

This year, the finalists were the most diverse ever. Incredibly, thousands of people entered their pets in the hopes of representing the creme eggs sold since 1971.

Of course, we all need a break from the news now and again, and these Easter animals are a welcome diversion. So, we’re taking a look at the finalists and the winner, who happens to be the first female Cadbury Bunny. (and the smallest)

This year, the winner is Betty, the Australian White’s Tree Frog from Stuart, Florida. Notably, it’s Betty’s first Easter, and she has made history as the smallest winner, first amphibian, and first female winner of the competition, reports ABC27.

“Betty’s been a great addition to our home, and we are so glad we get to share her with the rest of the world!” said Kaitlyn V., Betty’s owner. “She has been a wonderful companion at college, and thanks to the support of my friends, family, and the amphibian community, I know she’ll make Cadbury proud as she inherits the bunny ears.”

Blondi, the miniature horse from East China, Michigan, is 19 years old, reports WXYZ. Laura Sicinski, 13, and her mother, Angela, thought the mini palomino would be “perfect” as the Cadbury mascot.

At Halloween, they dress up the “sassy” horse and say she loves kids.

Out of 12,000 entrants, Logan the Great Dane from Chesterton, Indiana, made it to the top ten. A very docile 7-year-old Logan doesn’t mind wearing protective sunglasses due to missing pigment around one eye, says his owner.

Appearing surrounded by Easter eggs, he seems perfectly content to pose for days.

“We got him from a breeder, but he wasn’t quite show dog quality, so that’s how he joined our family. He’s very gentle, and he loves the bunny ears and his sunglasses. He also has dozens of themed neckties he likes to wear. Before the pandemic, he spent five years as one of the favorite visiting dogs at Avalon Springs, cheering up residents at the senior living facility in Valparaiso.”

When standing up on his back legs, Logan is about eight feet tall, but Katina says, “he knows not to do that.”

“He’s very quiet and well-behaved with everyone and just loves to dress up, especially in the spirit of the season,” she continued.

Logan was one of three canine finalists, including Archie from Pennsylvania and Fletcher from California.

Two-year-old Fletcher is from Huntington Beach, California. Every Friday, he goes to work with his momma, Ellen Kuhnert, a chief nursing officer in Santa Ana. Recently, he’s comforted people getting their COVID-19 vaccinations.

“[The pandemic] has been psychologically and emotionally and physically so draining,” Kuhnert told the LA Times. “Everybody’s so exhausted, so we try to do things to keep each other’s spirits up. Having him there is definitely one of those things.”

Fletcher posed behind the wheel of a purple Volkswagen Beetle, ready to deliver Cadbury eggs.

Sheldon the Miniature Donkey and Archie the Dog

This year, there were two finalists from Central Pennsylvania. Archie, a pup from McSherrystown, and Sheldon the Miniature Donkey from Dover both entered the top ten.

In years past, Sheldon has taken part in holiday festivities, reports FOX43.

“(He has brought joy to many hearts throughout his eight years of life,” Sheldon’s nomination read. “He loves to be the center of attention and get as many pets as he can. Sheldon has been in many live nativities, Christmas plays, Easter festivities and is always a favorite at the York State Fair. I would love to see him spread a lot more joy by representing Cadbury. Donkey kisses from Pennsylvania!”

The other Pennsylvanian finalist, Archie, loves people and the outdoors.

“Archie has a heart of gold!” his contest entry says. “At 4mo old, Archie had an accident which caused him to have surgery on his elbow. As a puppy, this was a challenge for the entire family. Not once did he challenge us in his care. After eight weeks, Archie was able to enjoy his puppy lifestyle. He loves people and the outdoors. Archie has been the best addition to our family.”

One of the entrants (though not a finalist) was a baby hippopotamus named Fiona from the Cincinnati Zoo. Notably, she was born premature and the smallest hippo to ever survive.

Now, she’s an international star with her own show.

Two Texans: Dog the Goat and Waylon the Alpaca

Dog, the Nigerian Dwarf Goat from Georgetown, Texas, “looks like a cow, thinks he’s a dog, has cat-like tendencies, and is GREAT at playing bunny,” states Cadbury’s Instagram.

Dog is five months old and got the peculiar name from the Ashcroft family’s 3-year-old son, reports MYSA.

After all, who wouldn’t want such a soft fluffy guest for any occasion? The pictures are priceless!

And, how can you not love Potato, the “sweetest mush of a mammal” from Maryland?

According to Cadbury’s Instagram, “Potato’s favorite things to do are eat, sleep and get loving pets. Her favorite snacks are bananas and carrots.”

Another finalist, Pepa, the 3-year-old Persian cat from Port Charlotte, Florida, must be the most patient cat ever, wearing green-lensed spectacles and yellow bunny ears. His name is shortened from Pepper for his black-and-white coat. Thus, it fit his “outgoing and spicy” nature, says his “mom,” Kat Sanne.

According to Sanne, Pepa loves wearing costumes. Generally, he wears sunglasses everywhere he goes in the South Florida area. Sometimes, he can be seen riding around in a kid’s toy car.

“Pepa is extremely relaxed,” she says. “Anything goes. It doesn’t matter,” Sanne told the News-Press.

As for the sunglasses, she said, “They’re his trademark. And he doesn’t mind them.”

Pepa and another cat in the family, Bon Bon, have starred in commercials. So, you might spot Pepa in a Best Buy ad, while Bon Bon appeared in a Chewy.com commercial as a “Picky Eater.”

Pepa beat out more than 12,000 other pets to make it to the finals.

Last year, a two-legged dog named Lieutenant Dan took the title out of over 4,000 entries. The coonhound from New Richmond, Ohio, sometimes uses a wheelchair to get around but can run fast on two feet.

Seeing Lieutenant Dan in his pink bunny ears and happy grin remains a joy to behold. Rescued from a Florida shelter, he found a new loving home and stardom as the 2020 Cadbury Bunny.

“How can you say no to this cute face and this big personality?” said his momma, Laura Person.

This year, the cute Lieutenant was a “guest judge” for the 2021 competition. After he helped narrow down the winner to Betty the Frog, Cadbury donated $15,000 to The American Society for the Prevention of Cruelty to Animals (ASPCA).