Hospital Refuses To Admit Mom In Labor, Then Stranger Runs Up, Says It’s A Christmas Miracle 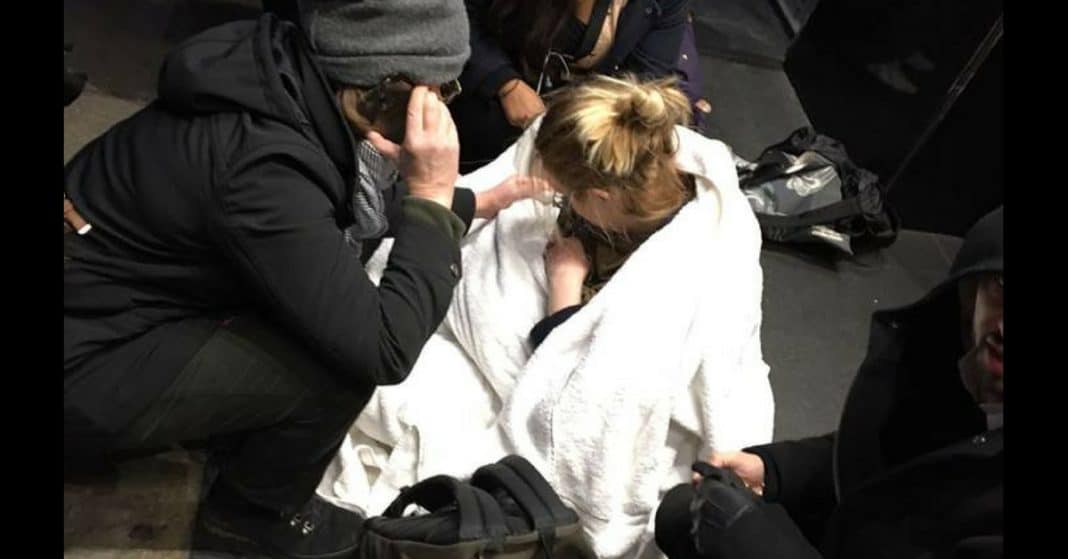 Babies don’t wait for anyone! They come when they want – to heck with plans and schedules!

It’s tough to predict – even for medical professionals – when a woman will actually give birth. There are parameters, but babies don’t always follow them.

When 35-year-old Lizzie Hines went into labor last December, she and her husband headed to the University College London Hospital (UCH). They were shocked when they were turned away by paramedics because Lizzie had only been in labor for two and a half hours.

“We went to UCH, but they told us to go home and come back later as I wasn’t far along enough,” Lizzie said.

They checked into a nearby hotel but were only there for half an hour before they headed back to the hospital, sure the baby was coming sooner than the doctors thought.

As they made their way back, Lizzie suddenly sat down on the sidewalk.

“My husband thought we were sitting down for me to have one last contraction before he carried us, running, into the hospital. But I knew I was sitting down to have the baby,” Lizzie said. “I just couldn’t speak at that point to tell him.”

It wasn’t the ideal location to deliver a baby, but Lizzie wasn’t too worried about that in the moment.

“I wasn’t thinking about the outside world, I was just focused on giving birth to my baby – which for us was the most all-consuming and beautiful experience,” she said.

“I remember so clearly lying down, seeing the ankles of commuters around me and knowing what was about to happen,” she recalled. “I remember the feeling of Louis’s limbs rushing out of my body.”

“When [Louis] arrived he flew at speed into the pajamas I was wearing with a T-shirt, bare feet, and a long coat, but no one had realized,” she said.

“I said ‘He’s here!’ And a woman said ‘Don’t worry, we will get you to the hospital before he arrives,’ and I said ‘No, he’s here!’ They opened my pajamas and found him wriggling and starting to cry out.

“Someone in the crowd shouted ‘It’s a Christmas miracle!’”

It was December 22nd, 2016, a mere three days before Christmas. Indeed, Louis was a miracle!

As Lizzie and her husband tried to process what was going on, some kind bystanders rushed to help.

“An amazing someone ran to get a wheelchair,” she recalled. “Another amazing someone – an off-duty doctor (who first thought I was a noisy drunk) came through the crowd and declared Louis healthy.

“It was only afterward when I reflected that giving birth on one of the busiest roads in the country probably wasn’t the best idea.”

Lizzie realized she had nothing to wrap her newborn son in, but just then someone came forward and swaddled Louis in a knitted scarf, protecting him from the elements.

Lizzie reflected on the selflessness and kindness of this person and the other commuters who came to her family’s aid. She wants to find these good folks to thank them for all they did.

“I have no idea who the scarf owner is, the events are such a blur,” she said.

She didn’t get any names or contact information, though none of us would expect her to!

“I’d like to say thank you for their kindness, and to all the people that helped,” she said. “There’s something amazing about sharing something so monumental and precious with strangers. Especially when they drop everything in that moment to help, and you can feel them rooting for you. I’d also like them to know that Louis is well and fine.”

University College Hospital has since apologized for their negligence.

“After Mrs. Elizabeth Hines gave birth last December, we carried out an internal investigation so that we could learn from her experience and reduce the risk of it happening again,” a spokesperson said. “We have also apologized to Mrs. Hines.”

Lizzie now wants to find the anonymous scarf-giver so they can meet her healthy and happy son…and get their scarf back.

“It feels like a fitting week to return it and introduce my babbling, toddling baby to a member of his welcoming party,” Lizzie said.

Lizzie’s post has garnered thousands of shares from people hoping to help her locate her child’s angel. So far, they have yet to be found, but we hope that by sharing this story Lizzie and Louis will be reunited with this good Samaritan soon!