5-year-old boy who weighed 29 lbs after being locked in closet, rescued by step-siblings 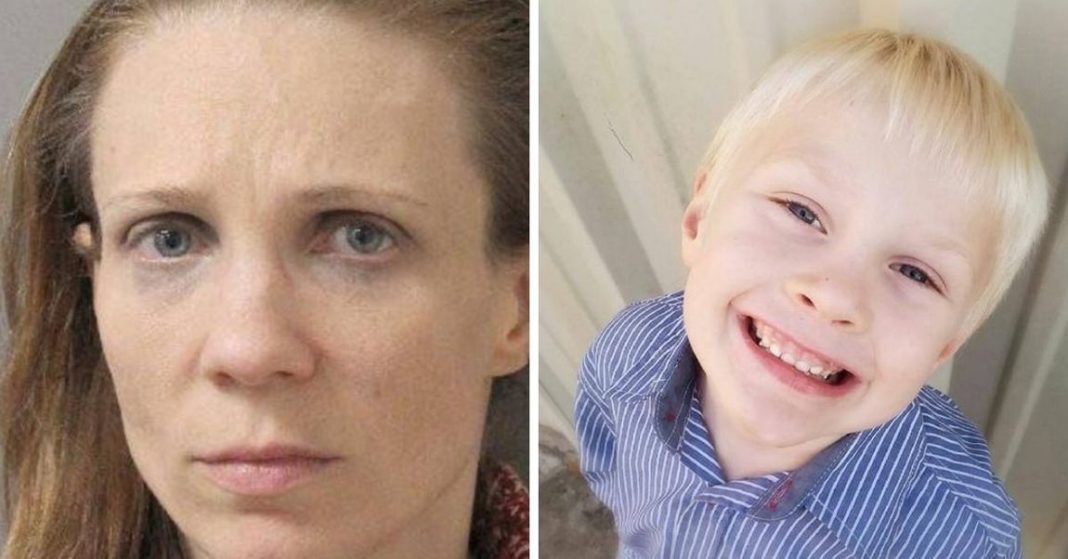 Justice has finally been served for a 5-year-old boy who was locked in a tiny closet under the stairs, starved, forced to wear a diaper, and beaten by his father and stepmother near Houston, Texas four years ago.

It took almost 5 years, but a Spring woman, Tammi Bleimeyer, has been sentenced to 28 years for starving her five-year-old stepson…"locking him away in a crawlspace under the stairs the family dubbed the “Harry Potter Room,” prosecutors announced Monday. #khou #HTownRush pic.twitter.com/DXtmJKYJfE

The horrors for the boy appeared to have started after his biological father locked him in a hot car in the Texas summer. Frank Mann, Attorney for Jordan’s biological mom, said Jordan Bleimeyer lived through unimaginable abuse:

“We do know that the child was tasered by the father. There was obviously verbal abuse, physical abuse, he pushed the child, he punished the child by putting him in the corner. When the child acted up, he slammed the child’s head against the wall, causing bruises.”

According to Mann, Jordan survived being locked in a hot car in 98-degree heat. Bradley Bleimeyer was doing remodeling work at home at the time, and a tenant notified his landlord, who contacted Child Protective Services. The lawyer alleges that CPS failed to rescue the boy from the abusive parents at the time, although they found him red, sweating, and distressed. Afterward, Mann believes the father and his stepmother started locking the boy in the closet, refusing to feed him.

By the time doctors were able to treat Jordan, they said his condition was comparable to a Holocaust survivor. He was 29 pounds, emaciated, and covered in bruises and scratches. He wasn’t able to stand up in the tiny closet and had no clothes, blankets, or pillow. Nails and exposed wires stuck out from the walls inside. 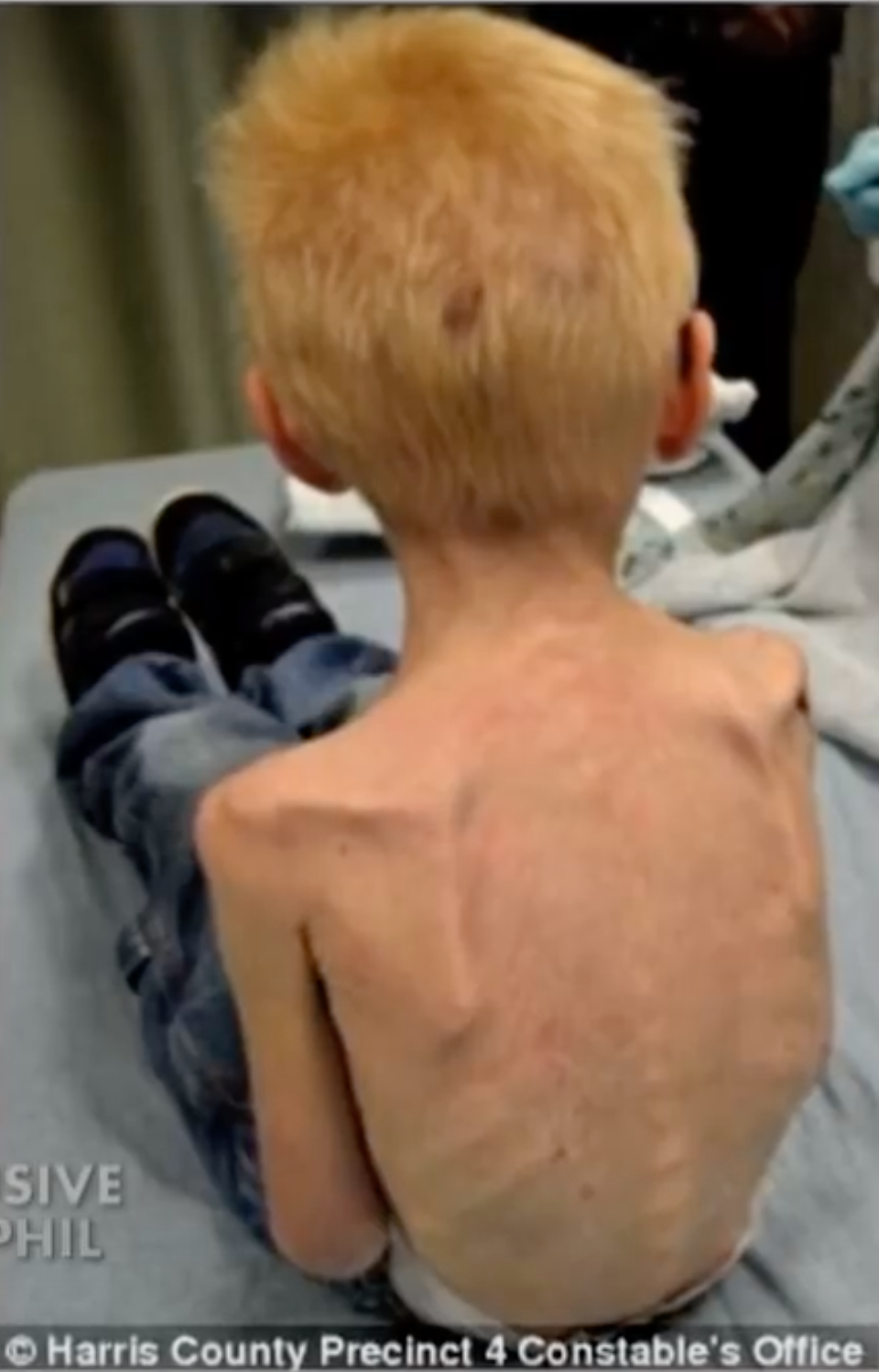 Later, a babysitter called CPS when she saw that Jordan was starving and underweight, but he was still not saved. Eventually, after two of Jordan’s step-siblings repeatedly reported the abuse to authorities, friends, and teachers, the police rescued him from what prosecutors called a “Harry Potter” closet.

The eldest of the kids, Cody, 16, and Allison, 14, feared they would be punished for helping Jordan, but they snuck him bread when his mother wasn’t looking. Then finally, Cody could take no more and broke into the closet to rescue his step-brother when his parents were outside the house.

“The day I opened up that closet, Jordan was in the worst shape I had ever seen him in.

“I had been in a huge fight with Brad so I was already in trouble and both adults were outside of the house so I just saw an opportunity and I opened up the closet to let Jordan out.

“But what I found was truly shocking – he was in his diaper, he didn’t have any clothes on.

“His face was all caved in, bruises all over, marks on him. His mouth was foaming. I have never in my life seen anything as bad as that.

“I kind of paused for a second and then I just freaked out.”

“If we hadn’t got him out that day I don’t think he would have survived.”

Cody went outside to confront his parents, who told him it was none of his business. He got into a shoving match with his stepfather, and managed to call the police with a prepaid phone.

“My mom had confiscated my phone but I had a prepaid phone so I called the police but in the meantime my mom was packing all the kids up and getting everyone out.”

The Sun reported that Tammi tried to escape to a hotel with Jordan and her younger kids. Bradley fled the scene, but both were arrested later in the day. Jordan and his seven step-siblings were taken to foster care.

After the horrifying ordeal, Jordan has gone to live with his biological mom, where he has made a “miraculous recovery” and is reportedly “a healthy, happy little boy.”

Cody, who is now a criminal justice student, revealed that Jordan was kept inside the closet in an even smaller cubbyhole.

“It was a dark space and there was insulation coming through the sides.”

“It was under the staircase so you can see the indentions of the stairs.

“There was nails going out of the ground, pieces of wood, it was a tile floor so pretty cold, wires coming out.

The kids were threatened if they told anyone about Jordan that they would be split up into foster care. Even so, they say they repeatedly told authorities anyway. However, they could not get the help they needed.

“The police had been to our house multiple times,” Cody said. “All the police officers told me there was nothing they could do about it.

“The teachers were unsure what to do – nobody could help me at that point.

“I remember police officers were actually at our front door and I asked them to come in and see what was happening and they said they couldn’t because I was underage and I didn’t own the house.”

“They were literally at our door and I was asking for help and they couldn’t do anything.”

Tammi Bleimeyer appeared on Dr. Phil in 2014. She claimed she was too busy to know what was happening to Jordan.

“Brad was responsible for taking care of Jordan and everywhere that he went, Jordan went too,” said Tammi.

Finally, Allison and Cody testified in court against their mother. They were shocked she received a 28-year sentence, but hope she will learn from her mistakes.