Homeless Man Sees Bomb Victims Running Out Of Arena, He Runs In Instead 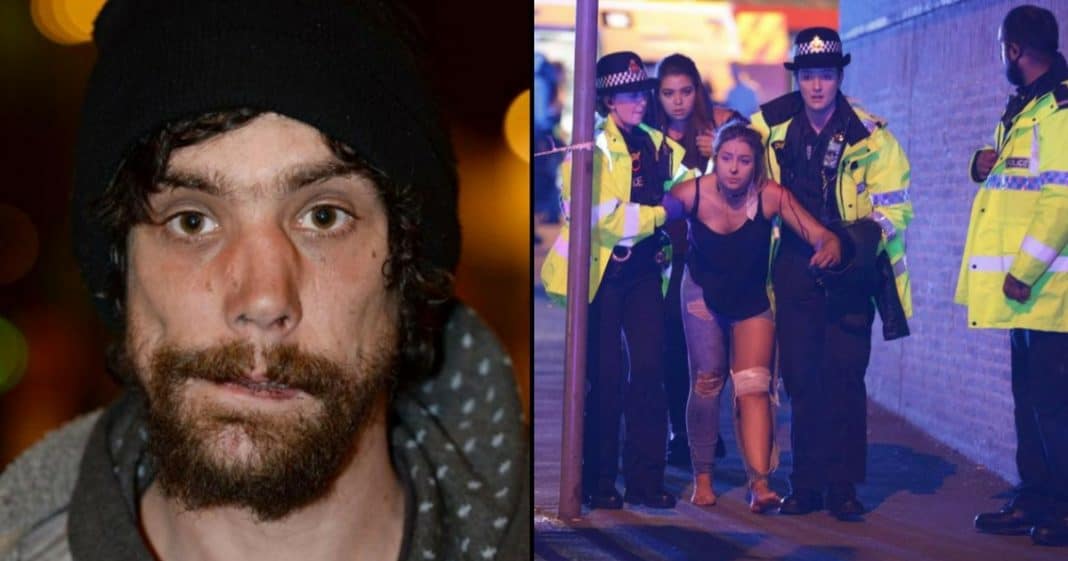 The world was rocked Monday night when a suicide bomber detonated a home-made bomb in the foyer of Manchester Arena as crowds were leaving an Ariana Grande concert. Twenty-two people have been confirmed dead and another 59 have been taken to local hospitals to be treated for injuries.

The attack was tragic and heartbreaking – one of the worst the United Kingdom has ever experienced – and our hearts go out to the victims’ families and loved ones as we know they are still reeling from the attack.

In the midst of the darkness, though, there is always a light that shines through.

Beloved children’s television host Fred Rogers once shared something his mother would tell him when things in the world seemed unbearably bad:

“When I was a boy and I would see scary things in the news, my mother would say to me, ‘Look for the helpers. You will always find people who are helping.’”

So here at So Share This we want to highlight the stories of those unlikely heroes who stepped up in the midst of a horrible situation and shone a little light into the darkness.

We have already shared the story of one homeless man, Stephen Jones, who immediately ran to start helping injured children as they poured out of the stadium. But Stephen wasn’t the only homeless man-turned hero that night.

Chris Parker, 33, regularly goes to the arena when there are events to beg for money from concert-goers. On Monday night he was standing there watching people happily walk out after the concert when he was suddenly knocked to the ground by the force of the blast. In an instant, people began screaming and fleeing the arena.

Not Chris, though. Instead of running away from the danger, he got up and ran right toward it.

“As people were coming out of the glass doors I heard a bang and within a split second I saw a white flash, then smoke and then I heard screaming,” he recalled. “It knocked me to the floor and then I got up and instead of running away my gut instinct was to run back and try and help.”

Chris described how he wrapped a young, bloodstained girl in a merchandise t-shirt and comforted another woman as she lay dying.

He said he can’t get the images of that night out of his head and he hasn’t stopped crying since it happened.

“There was people lying on the floor everywhere,” he said. “The most shocking part of it is that it was a kids’ concert. There were nuts and bolts all over the floor. People had holes in their back. It’s the screams I can’t get over and the smell … I don’t like to say it but it smelled like burning flesh.

“I don’t think anything has sunk in yet,” he added. “It’s just shock.”

The fact that someone with absolutely nothing would put his own life at risk to help others has touched many people in Manchester and around the globe. One man, Michael Johns, decided to do something to help this hero.

“My name is Michael Johns and like many others have been horrified by the news from Manchester,” he wrote on a GoFundMe page he started to help Chris get back on his feet. “Amongst the sad details one story has stood out for me and compelled me to make an effort to help one of our most vulnerable in society who showed great selflessness and courage.”

Michael said he is not currently in contact with Chris but is working with journalists to track him down so he can give him the money.

Many others have also stepped up to help. Kyle Heath is trying to find Chris a home and is using the hashtag #homechrisparker to spread his message and hopefully find a good place for Chris to stay.

One thing is for sure – Chris’ heroic and selfless actions that night will not soon be forgotten.

“Massive respect to Chris Parker,” wrote one social media user, “a homeless man who did what he could to help people in Manchester. He has nothing but gave everything.”

Do you think Chris is a hero? So share this!