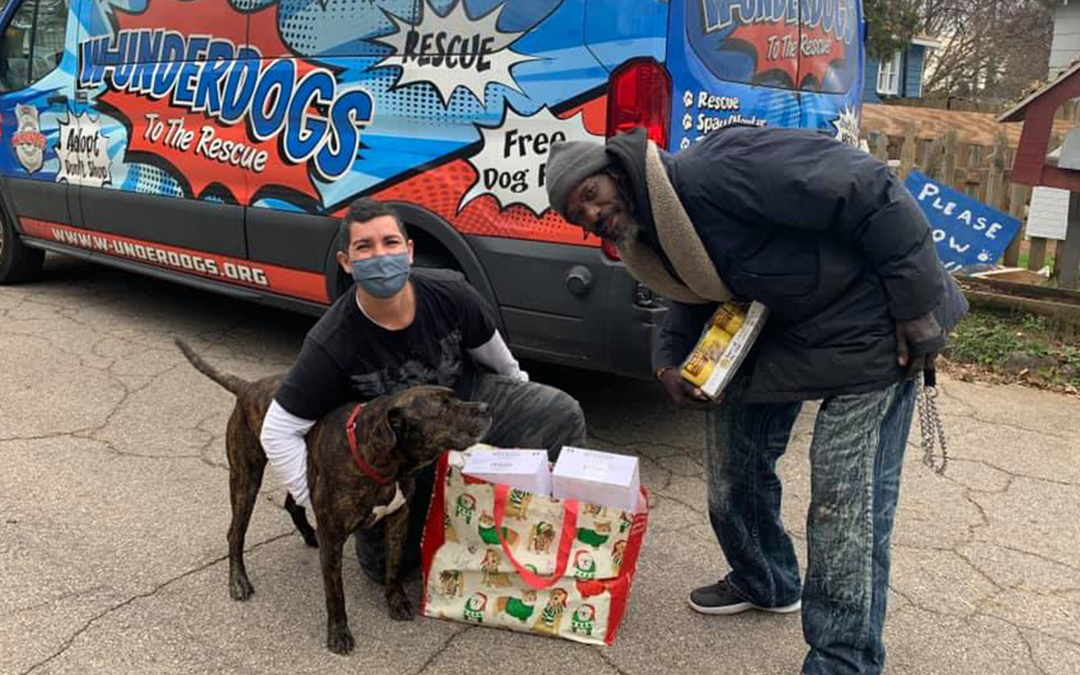 A heroic homeless man living in Atlanta, Keith Walker, 53, sprang into action, risking his life to save over a dozen animals from a fire on Friday evening, December 18.

A fire had engulfed the kitchen in  W-Underdogs, a nonprofit animal shelter, and youth organization.

Founder Gracie Hamlin told CNN that Walker bravely faced the fire to save ten cats and six dogs. One of the dogs was Bravo, his pet, that stayed at the shelter.

“He is my guardian angel,” Hamlin said. “Even the firefighters didn’t want to handle the dogs. They called animal control, but Keith was already in the building pulling out the cats and dogs until they were all safe.”

In a Fox5 interview, Hamlin stated:

“Animal control is talking to us on the phone, and they’re saying he’s just rushing in getting one dog at a time,” Hamlin said. “Animal control was able to grab a couple from him.”

Walker described what happened as he decided to face the fire.

“I was nervous as hell; I’m not going to lie. I was really scared to go in there with all that smoke. But God put me there to save those animals,” Walker told CNN. “If you love a dog, you can love anyone in the world. My dog is my best friend, and I wouldn’t be here without him, so I knew I had to save all those other dogs.”

Thanks to Walker, all the animals got out in time. Fortunately, W-Underdogs was in the process of moving to a new facility, so they all had a safe place to go. Volunteers from the shelter soon arrived to help move them to their new home.

According to W-Underdogs’ Facebook post, the owner was out picking up supply donations when a call came in alerting them of the fire. Then, fire officials let them know a homeless man had rushed to the scene to bring the animals to safety.

Hamlin knew Walker, saying she allowed him to keep Bravo at the shelter overnight. Sadly, she says he has been homeless for 40 years since 13-years-old. Over the years, the shelter had given him various jobs but faced constraints as a youth organization, unable to provide him lodging in the facility.

Donations Pour in For Walker and the Shelter

Following the reports of Keith Walker’s heroic animal rescue, donations have poured in. NBC News reported on the GoFundMe created for Walker three days ago. So far, over $55 thousand has been raised for him by the organizer.

“To everyone who has contributed to this campaign or any other, you are what makes this world a better place, and you make me feel hopeful that we can repair this broken and struggling country. Thank you so much,” wrote Frank Cote.

“We are so lucky all the animals were able to be evacuated and no lives – animal or human – were lost. Our animals and youth are scared and confused and we are pouring love into them to help them recover,” wrote Hamlin.

On the page, she explained that W-Underdogs helps at-risk youth learn compassion and empathy by caring for the animals.

“The mission of the W-Underdogs is ‘To empower youth through service to animals and communities.’ Working with at-risk youth, we rescue animals and help the kids learn empathy and compassion and to pay it forward in our communities. We see change, one child and one animal at a time.”

Advocating For a Homeless Hero

Following donations, the shelter was planning on the best way to advocate for Walker, who struggles with addiction.

“Our motto is ‘your friendly neighborhood superheroes’ and that is how the kids in the program are seen in their community. Keith embodied the spirit of W-Underdogs when he saved our animals in their time of need. We value the relationship we have built with him this past year while helping him to care for his dog, and we will continue to work with Keith according to what his wishes are,” states W-Underdog’s Facebook page.

Meanwhile, Fox5 Atlanta spoke to Walker, who explained how much Bravo meant to him.

When asked about what he did, he was humble, saying, “Probably anyone would have did [sic] the same thing I did.”

However, pictures of the shelter after the fire show extensive damage to the place. Walker was indeed a hero, jumping in to save the animals even when fire officials held back.