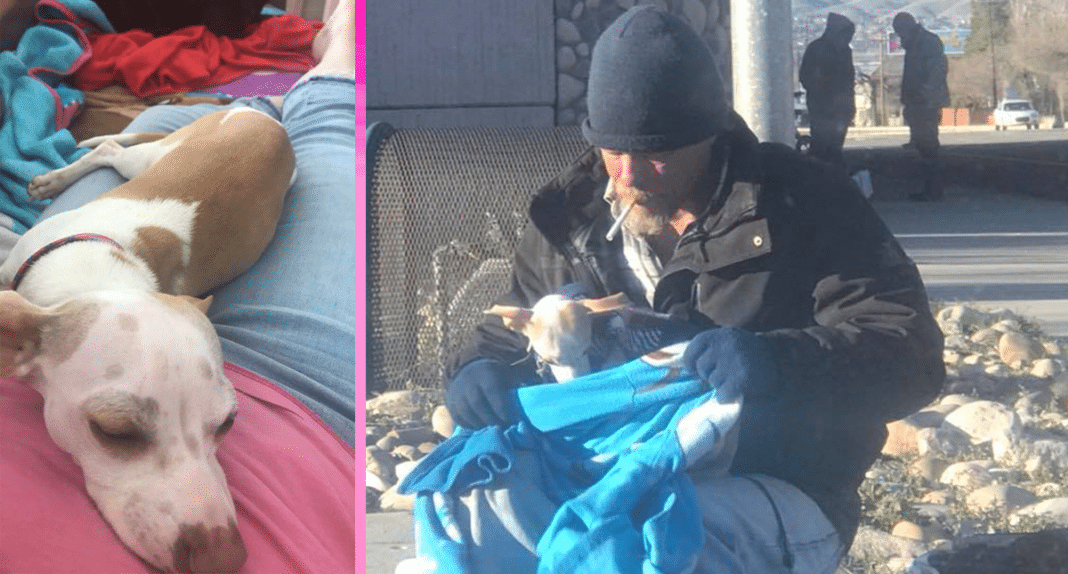 A homeless man put the needs a little chihuahua ahead of his own in Salt Lake City. As a result of his kindness and selflessness, he also received some much-needed help himself.

One Salt Lake City resident, Angel Janes noticed a man sitting near a freeway exit on her way home. He was holding a sign asking for money or work, but she noticed something unusual –He was cradling a little dog in a blue blanket on his lap.

Janes stopped to offer a cigarette and after talking to Ron she found out he had rescued the little dog after seeing a woman dump him on the busy road from her car.

Hey everyone! This homeless man saved this chihuahua after someone DROPPED it out of her car and abandoned it on this…

Ron didn’t want the little guy to be homeless like he was. He knew he needed help.

While Ron was enjoying the company of the little Chihuahua, he knew he deserved a shot at finding a home too. Angel posted about the situation on her Facebook page, and soon a friend joined her, sharing the story to a group for vegans called Salt Lake Vegan. In just minutes, a woman named Lisa and her child were on their way to rescue the puppy.

Now at the scene, the group was overcome with emotion and crying as they thanked Ron for saving the little dog. Lisa decided to offer Ron money for saving the dog, but he wasn’t interested. He just wanted the dog to have a happy life.

“Ron and Lisa’s story helped remind me that all lives matter, animal or human, homeless, not homeless, are equally important. Ron is a hero who cared for this dog over himself. He was looking for this dog to have a home even before he had his own,” said Kathleen Dallmann.

The little Chihuahua was on its way to a loving home, as you can see in the picture below. A woman and her daughter adopted the dog, naming him “Lucky Louie,” which he certainly was. 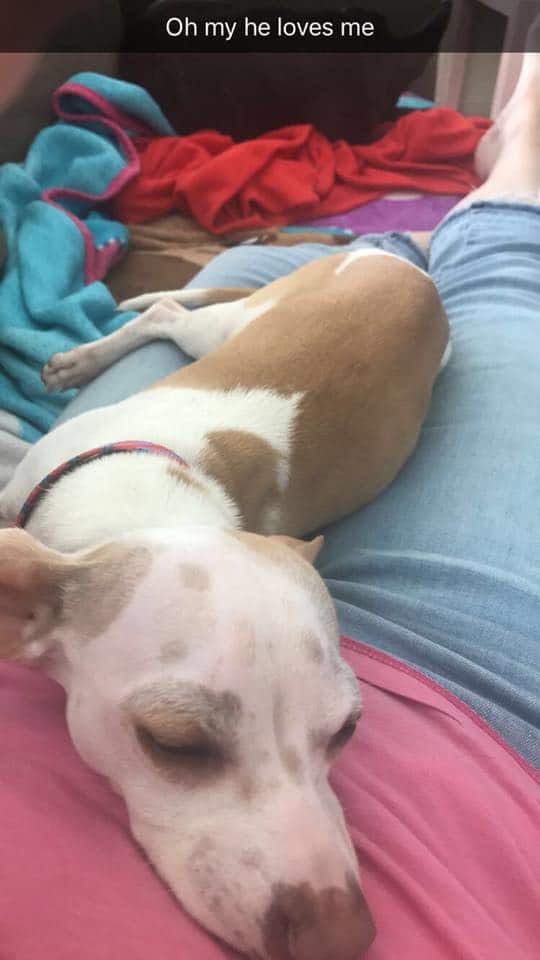 But what about Ron? Surely someone could help him too?

It turns out that Angel and Kathleen wanted to make sure he got the help he needed too. They set up a GoFundMe page to help Ron. In just 12 days, Ron is on the way to reaching a $10,000 goal to help him get back on his feet and find a home for himself. Almost 300 people chipped in what they could to reward his kindness.

Dallman delivered some of the money to Ron after the total went up to $500. He couldn’t believe that the community had cared enough to help him.

Ron still wanted to help his little furry friend with some of the money.

“He was in tears,” Dallmann said. “He couldn’t believe that the community would do something so nice for him. When I handed him the money, he wanted some of it to go to the dog’s care. But I told him it was just for him.”

The kindness of generosity of a man who had lost it all has resulted in an outpouring of kindness and generosity from people he doesn’t know, but who all are rooting for him to get back on his feet and start a new chapter in his life. It’s a happy ending for everybody.

See Ron and Kathleen talk about the generosity he received from strangers in her Facebook video below:

UPDATE WITH RON: Met with Ron tonight to give him all the money that was donated. I wish i could have got his original reaction because he was seriously freaking out, crying, and kept saying, "Are you sure this is for me!? From who, from who!? Who would do this for me!!?? For a homeless man!!??" I told him it was from the community, giving back because they were inspired by him and want to make sure he has a happy ending just like that dog that he saved from getting hit by a car and found a good warm home for. He said multiple times people have loaded up all his belongings in a truck and drove off with it. That people usually call him horrible names, so he just couldn't believe it. He looked through the envelope like 10 times because he really couldn't believe it. He said he promises that he will not let us down!! He was like, "This man isn't sleeping on the street tonight!!!" Then the second thing he said he was going to do was to go to get a phone so he can stay connected. I have literally never seen anyone so excited in my life and shed a couple tears myself, seriously a million dollar response. He wanted to donate some of it for food for the dog, I told him we got it under control. All of you are soooo amazing. You gave him the will to fight the good fight. Keeping the go fund me up for a little bit longer in case anyone anyone wants to donate. Not every day you get to hand a homeless man $400 plus dollars, thanks everyone! We have continued the gofundme, if you are interested in helping please click on the link below! 🙂 Angel Janes Dutch Whitlock Lisa Donaldsonhttps://www.gofundme.com/Helpahomelesshero