Homeless Boy Approaches Car To Beg For Change. When He Sees Who’s Inside, He Bursts into Tears 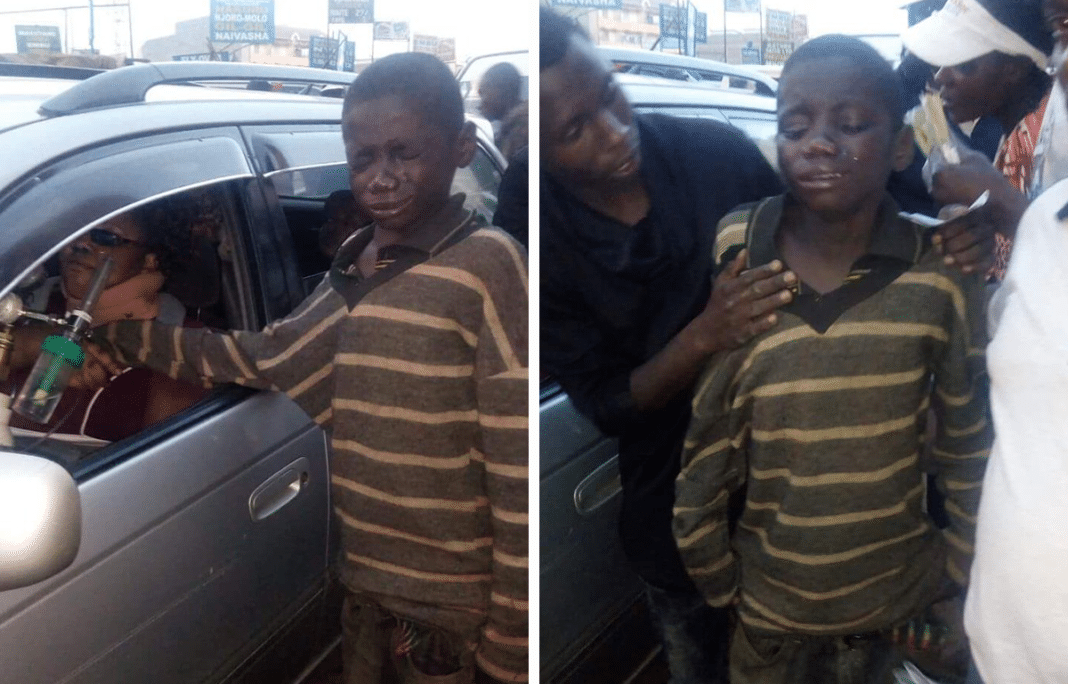 A young boy named John Thou was living on the streets in Nairobi, Kenya. He had been reduced to begging after his mother died and he had to run from an abusive father. His life was a daily struggle for survival, as it is for many children in the city, reduced to the life of a “street urchin.”

One day, he approached a car window to ask for help, but when he looked in the window he was soon overcome with emotion. The woman inside was hardly able to move, hooked up to tubes and oxygen tanks. She also couldn’t see, and explained to John that she needed assistance breathing.

The struggles this woman faced touched the boy so powerfully that he started to cry. He reached into the car window to hold her hand, overcome that here was a woman who needed help even more than he did. He selflessly offered the women the money that he had managed to collect that day, though he was barely surviving himself.

A bystander took photos of the emotional moment and shared the story and pictures on social media. The photographs went viral, touching people all over Kenya. Everyone was moved by this act of kindness and generosity from the boy. Although the children begging in the streets are often seen as mischievous thieves, this boy clearly had a heart of gold.

A homeless street boy in Nairobi-Kenya is overcome with sympathy after meeting Gladys who relies on artificial oxygen. Truest humanity. pic.twitter.com/L5uJsBsH3G

News spread far and wide about John, and soon the Mayor of Nairobi City, Mike Sonko shared the picture, asking for help for the woman, Gladys Kamande.

She had suffered from domestic abuse, multiple miscarriages, and health challenges that few people can imagine.

In just days, the citizens of Nairobi donated an astonishing amount of money to Kamande. The 32-year-old needed to travel to India for incredibly expensive lung reconstruction surgeries.

The fundraising efforts raised more than enough for Gladys to get the treatments. But what about John?

The selfless act of kindness from the boy changed his life as well. He was adopted by a woman named Nissy Wambugu and could begin attending school again.

He has another mother in Gladys.

“I consider him my son,” said Gladys.

Someone has adopted the street kid who showed human compassion through tears on seeing lady breathing on oxygen cylinders pic.twitter.com/704ebeYMxV

During her treatments, her vision was also restored. Gladys updated Kenyans on her amazing health progress and even went on to release a gospel song.

The moment John met Gladys, their futures would look brighter. The kindness and generosity of this boy would be rewarded beyond what either of them could have imagined.

See more in the video from NTD Inspired Life below: