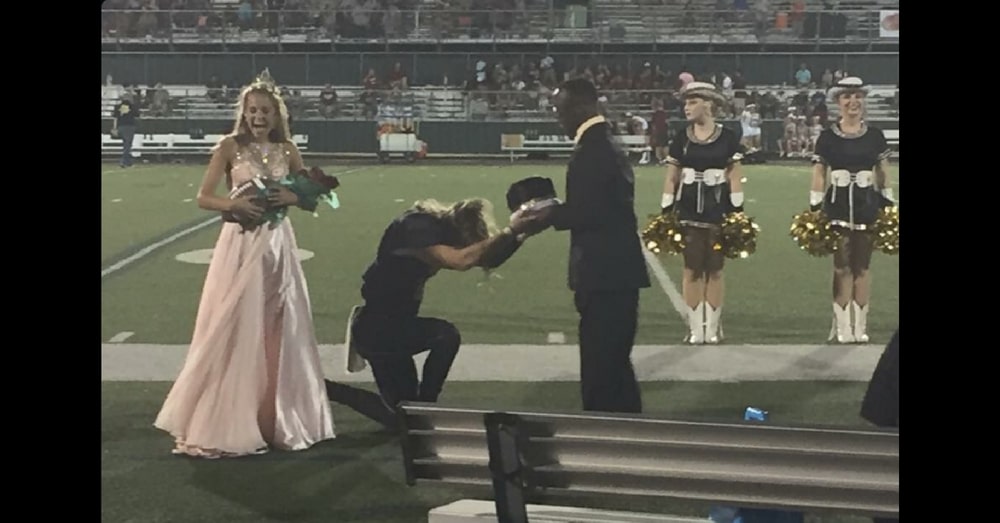 It wasn’t surprising when Max Atkin won the title of Homecoming King at Fossil Ridge High School’s homecoming game. The popular senior is his football team’s quarterback, and in just the first half of Friday night’s game he had 200 passing yards, 60 rushing yards, and four touchdowns.

On the surface he looks like the typical All-American jock, but beneath that lies the heart of a true hero.

Before the winner was announced, the homecoming king nominees stood before the crowd, one of whom was Max’s friend K.L. Norwood, the football team’s manager.

K.L. has cerebral palsy, but he doesn’t let that keep him down. He is always cheering on the team and lifting up the spirits of everyone around him.

When the announcer called out Max’s name as homecoming king, Max was thrilled, but he believed someone else deserved it more. Just moments after receiving the crown he turned, knelt down on one knee, and presented it to K.L.

“I think it should’ve gone to the person who positively uplifts the school and everybody around him,” Max said after, “and that person is K.L., for sure.”

“I thought it was the best hearing them chant K.L.’s name right after halftime, and I know he liked that, too,” Max continued. “Everybody was going wild for him. Everybody loves K.L. at this school.”

“Max—that’s just what he is, and that’s what our team is, too,” he said. “They love each other, and that’s why we’re successful.”

As for K.L., that moment is one he will never forget.

“It was absolutely terrific,” he said. “I appreciate it.”

Were you touched by what Max did for his friend? So share this!