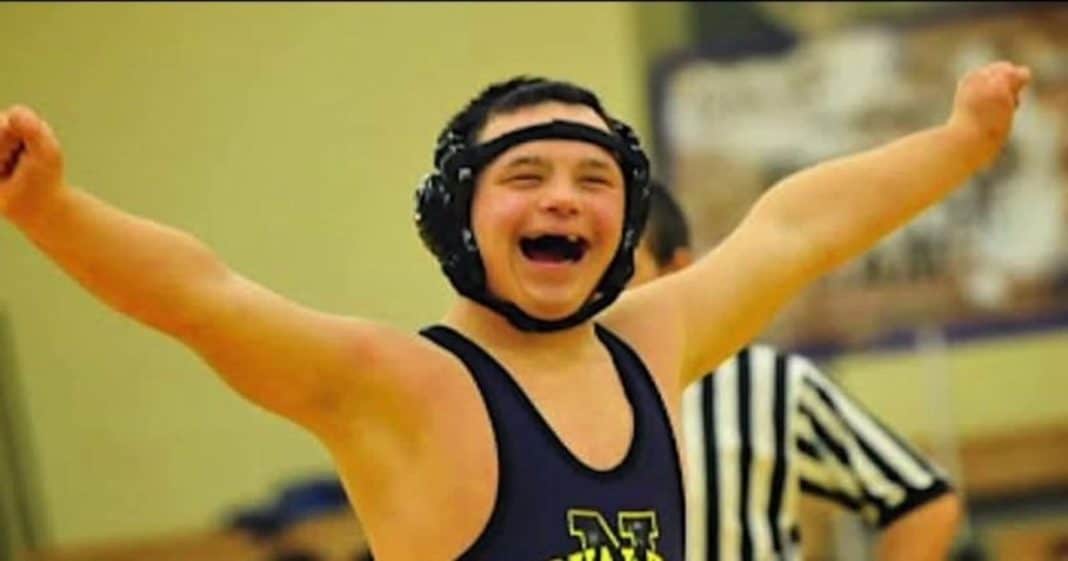 Some people inspire us by just being themselves. They don’t have to work at it either. They fit in no matter where they go, or what they do, always bringing out the best in those around them.

This past week, the seniors on the North Royalton, Ohio wrestling team had their final match. One member of their team has been undefeated this year. His name? Cedric Lehky.

Cedric started wrestling in the eighth grade; and though he has Down syndrome, he’s never been treated any differently than his teammates. He’s never been looked upon as having limitations or being disabled.

“If we sprint he sprints. If we do push-ups, he does push-ups. If we do sit-ups, he does sit-ups.  It’s all the same, so in that regard, we try to say you are a wrestler, and when he is in here, he’s  just a wrestler. His name is ‘Ced,'” coach Sean Folk told WJW.

Cedric has had a remarkable high school career; he was voted Homecoming king and embraced by his wrestling teammates and those who weren’t on the team. Everyone loves hanging out with everyone.

“He’s a big part of this team. When our morale is at the lowest when we are cutting weight, you know our energy is at its lowest, he brings us up,” said Aaron Hertel.

Friday saw Cedric wrestle in his final match. He was cheered on by friends, parents, fans, and people from both teams. On the mat for the final time, Cedric pinned his “cooperative opponent” and won the match.

“They would all come up and high-five him and sit down and talk to him, and I thought that was really nice too. It wasn’t just the North Royalton wrestlers, but it was also the other teammates,”  said his mother, Jeanette Brinkley.

“Some kids came down and sat right next to him, and they had some conversations, and they were genuinely just happy that Cedric was there and talking to him,” she added.

Cedric’s mother mentioned the impact her son’s had on everyone around him. It’s not just at his school but in the community as a whole.

“Just to give hope to any other parent with special needs. He does everything that everyone else would do and I just never had any expectations that he well exceeded and it’s beyond amazing.”

Way to go, Cedric for having an undefeated season! Nice way to wrap up the year!